If you haven’t guessed from the headline, then I’ll let you know that it’s gas-fired power generation.  And it’s helping to support LNG and pipeline gas prices.

Despite approval from the UK for the new Hinkley Point C nuclear power plant, the global atomic power industry isn’t having a great year.

Unexpected outages and issues in South Korea, France, Switzerland, and Germany have resulted in lower-than-expected output. While Japan still wrestles with what to do with its 42 reactors.

In all these countries, gas and LNG is expected to play a major role in offsetting lower nuclear power production.

Part of the issue came to light after a production quality audit at the Creusot Forge factory unveiled irregularities in the manufacturing checks of 400 parts produced since 1965, of which around 50 are still in use in the French nuclear industry.

The irregularities include inconsistencies, modifications or omissions in the production files concerning manufacturing parameters or test results.

Meanwhile, an outage at Switzerland's biggest nuclear plant, the 1.2GW Leibstadt facility, has been extended by several months to mid-February. And Germany utility RWE's 1.3W Gundremmingen C reactor will run below maximum capacity from 26 September until the start of maintenance at the end of December to avoid a nuclear fuel rod tax.

And while coal prices climb, gas remains relatively steady, which indicates fuel switching is possible for Germany and other parts of Europe (see chart below). The UK has already switched to gas due to the additional carbon tax, and ample supply across northwest Europe.

In Asia, eight out of a total of 21 nuclear units operated by South Korea's Korea Hydro and Nuclear Power (KHNP) remain off line, removing 30pc of the country's nuclear generation capacity. This follows an earthquake in the country on 12 September. State-owned gas firm Kogas is expected to import LNG to compensate.

Japan has only two operating nuclear reactors out of 42, with utility Kyushu Electric Power's Sendai No.1 reactor shutting today for regular two-month maintenance. Another two reactors at Takahama had been expected to restart after passing new safety checks, but a court order earlier this year has blocked operations. After the Fukushima Daiiichi meltdown in 2011, all reactors were shutdown with LNG imports jumping to replace lost nuclear power output, and restarts have been slow due to opposition from the general public.

So nuclear has stumbled. But no matter. Gas is back to cushion the fall. 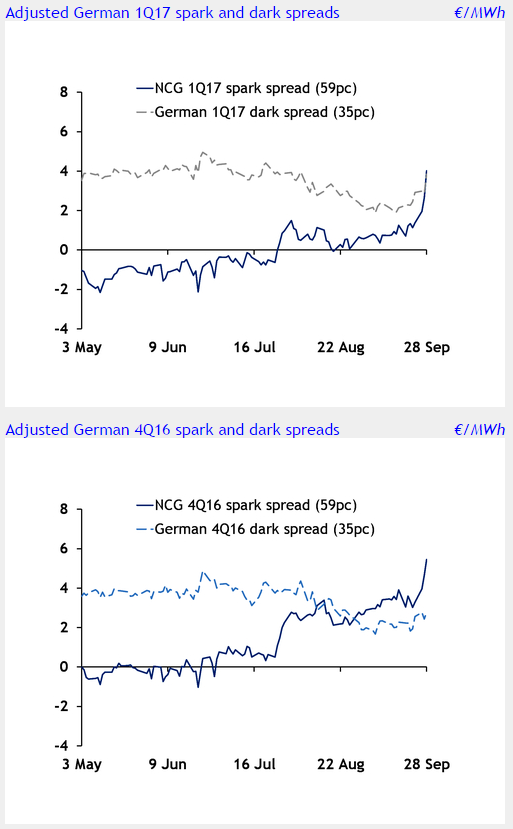