First, there was the US-China trade deal. Regional cargo prices saw an initial uptick in mid-January when Beijing and Washington signed an agreement that would — in theory — boost energy exports to China after more than a year of being at a mere trickle. China promised to increase its US purchases by more than six-fold in the next two years, which seems optimistic. Beijing said Chinese importers will buy an additional $18.5bn of crude, LNG, coal and refined products in 2020 and another $33.9bn in 2021 on top of 2017 baseline purchases.

The US has already committed to a tariff reduction on commodity imports from China to 7.5pc, effective 14 February, compared to the 15pc rate imposed by the September 2019 round of tariffs.

Beijing retaliated for that round of tariffs by imposing a 5pc tax on US crude imports, but it remains unclear if China will reciprocate the White House's latest actions by reducing tariffs on commodity imports from the US.

Beijing said it will begin enforcing measures to increase US imports within four months of signing the agreement. Conveniently, it won’t begin reporting progress toward these ambitious goals until after the presidential election in November.

And now markets are suffering from an outbreak of the coronavirus infecting thousands across China’s central Hubei province that has curbed gasoline and jet fuel demand amid travel restrictions. Overall crude demand could ultimately be hurt because of expected port delays.

Saudi Arabia and its Opec+ partners have stepped in to reassure the industry, saying that they have the capability and flexibility to maintain global market balance with further output cuts, if necessary.

But senior Opec officials are ultimately writing off negative price trends in the futures market as “extreme pessimism” for the time being. 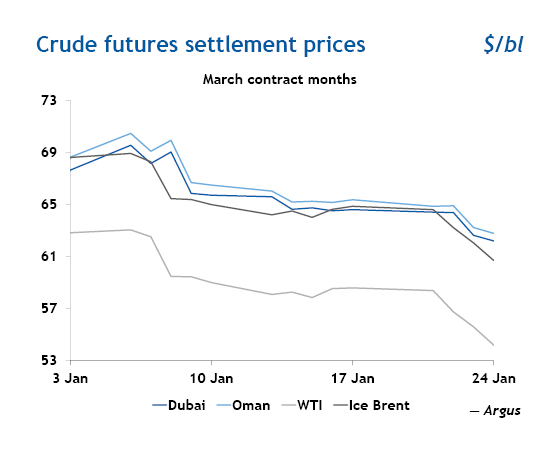 Onshore port expansions in Corpus Christi are moving at a fast pace and some are getting even larger.

Buckeye Partners told Argus that it will have 8.6mn bl of storage at its South Texas Gateway terminal, an increase from the previously planned 7mn bl. The facility will be in service in the third quarter, a slight delay from a previous estimate of “mid-2020,” according to Marathon Petroleum, a partner in the terminal.

On the offshore front, the consolidation of VLCC offshore projects has started in earnest as Enbridge and Oiltanking formally withdrew their application from the US Maritime Administration. The move follows Enbridge joining a competing VLCC project with Enterprise Products Partners, also planned off the coast of Freeport, Texas.
So goodbye to “Texas Colt,” aka the Texas Crude Offshore Loading Terminal. Expect more consolidation in this space as most industry observers see only two offshore VLCC terminals actually reaching the end: one near Corpus Christi and another in the Freeport/Houston area.

The impact of Corpus Christi continues to impress. In the latest Census trade data, the south Texas port accounted for about 41pc of all US crude exports in November. This compares to just 17pc in July 2019, before three major pipelines went into service moving Permian basin crude to Corpus Christi.

Overall, US crude exports in November declined from a record high but stayed above 3mn b/d.

On a side note, the Energy Information Administration threw a major curve ball at the market with a very high weekly estimate of 4.5mn b/d for US crude exports in the week ended 27 December. We shall see if the spike is reflected in the more definitive monthly Census data.

All eyes will be on the new monthly trade data scheduled to be released on 5 February. Exports out of Corpus Christi should hit fresh record highs, and we will have a full set of numbers for 2019 to analyze and crunch.

Key early buyers of US crude in 2020 include Uruguay, Thailand, Indonesia and — of course — Taiwan, which has already termed up some WTI deliveries through November. And now Belarus, traditionally an importer of Russian crude, is poised to become the latest European buyer of US crude as it diversifies its import slate on the back of a price dispute with Moscow briefly depriving its refineries earlier this month.

As luck would have it, the Census trade data will be released just as industry movers and shakers gather at the Argus Crude Export Summit in Houston. Come and find us! We’ll be at the front lines.

If you can’t make it, smooth sailing until next month’s analysis on US crude exports and fundamentals.