Last week's Opec+ meeting surprised markets with an agreement to lift production quotas by over 1.1mn b/d between May and July, not including Saudi Arabia’s own pledge to unwind its own 1mn b/d of additional voluntary cuts over the same period.

While the global crude oil market seemed to take the news well, Opec+ has acknowledged that these plans aren't set in stone and could still change should circumstances require.

In this episode of The Crude Report, Argus Opec correspondent and Dubai Editorial manager Nader Itayim details what was agreed upon, and what factors could result in Opec+ changing course - a big possibility should we see a potential return of Iranian volumes in the coming months.

Late last week, Opec+ surprised markets with a decision to begin gradually raising its production quotas between May and July. The initial market reaction was good with Brent closing more than $2/bl higher on the day of the announcement although prices have edged lower since.

With me today to outline and analyze last week's meeting is Argus's Opec correspondent and Dubai editorial manager, Nader Itayim. Hi, Nader. Thanks for joining me today.

Nader: Thank you, Jessica. Great to be here.

Jessica: So a lot of people thought that Opec+ was going to stick with its current production quotas for at least another month into May, even some Opec+ delegates, but it sounds like something changed over the course of the talks leading up to the April 1st ministerial meeting. What was agreed exactly, and what do you think convinced the group to take such action? 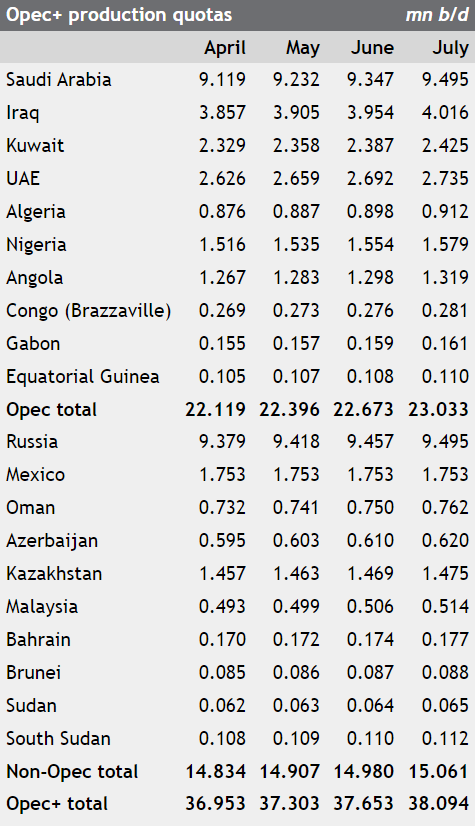 That's going to be split up on a pro rata basis among all the members except for Russia and Kazakhstan, which were granted special quota increases every month since February, while all the other countries agreed to keep their quotas unchanged.

Russia and Kazakhstan they're going to have their quotas raised by 39,000 and 6,000 b/d respectively. That's both in May and June and 38,000 and 6,000 b/d in July. And finally, the group also agreed to extend their deadlines to deliver what they call compensatory cuts until the end of September from the end of July or before that. This is to give countries that were struggling to make up for, you know, earlier overproduction, more time to deliver.

Now, as you say, it was a bit of a surprise. Last month, all the talk was about caution and not letting up, you know, too soon. Fundamentally, we haven't really seen much of an improvement since then with really the same demand-side concerns still very much at play, so the expectation ahead of that meeting was very much of a rollover of the cuts for at least another month.

Now, as you also mentioned, even delegate sources, they were telling us that they believed a rollover was on the cards, say less than 24 hours before the meeting, the final ministerial meeting.

Despite that though, ultimately the group felt that it does see enough green shoots of recovery over the coming months to at least sort of test the water, so to speak, and make what it considered to be a calculated risk and raise production gradually to reflect sort of a forecast of increase in demand over the coming months.

The Saudi energy minister, Prince Abdulaziz bin Salman, he actually made a point in the press conference after the meeting to say, look, you know, we still have another full month of the current cuts until the end of April. But after that, the group felt that there is some room in the market to begin bringing in some of this oil back to the market, albeit sort of in a managed way to safeguard the market.

Jessica: And it sounds like Saudi Arabia is so convinced that they've even committed to rolling back their own additional voluntary cuts. Aren't they the ones that are usually the most conservative?

Nader: Yes, they are hence the surprise. But in hindsight, the reasoning, it's sound. What Saudi Arabia plans to do is sort of unwind this additional 1 million barrels per day of voluntary cuts that it's been implementing since February, also in a gradual manner.

Now the Prince, he insisted on the day that this decision doesn't necessarily signal any change in its approach. What he said was, and I quote, "the cautiousness is still there," and he stressed at Opec+, "We'll still have to be mindful of the overall scene and see how things evolve."

But at the same time, he stressed that Opec+ does need to be flexible. And he said something along the lines of the decision being sort of nothing more than having the guts to test our will and test our system of tweaking.

Now here, he was referring to a mechanism that Opec+ set up in December last year, which sees them meet and study the market every month, rather than every three to six months as they have been doing in the past. This, the group argues that it keeps them more agile and keeps them on the front foot when it comes to determining market policy for the future. A kind of insurance policy, if you will.

Jessica: So during these monthly meetings, what kind of market conditions do you think that they would be looking for as they consider how they go or move forward?

Nader: Right. So this whole thing about an insurance policy, this is a critical point. Meeting every month and having the ability to tweak or reverse course, it's pretty critical to what Opec has been doing so far. And it's true that this decision could be seen as a bit of a risk, but it's calculated.

At the press conference, we actually asked whether agreeing on a policy for three months ahead, it could cause a problem in that whether it could create a momentum to increase output and have all the members expect that they'll increase output, which would eventually make it harder to change course.

The Prince wasn't concerned though, he pointed to the fact that the group has already faced this kind of a decision in January when it was supposed to begin increasing production, or it was open to increasing the production, but ultimately decided to keep production steady for February, March and April because of market conditions sort of dictated the need to do that.

Now in terms of what would cause a change of course, these would be both supply side and demand side issues. On the demand side, I mean, that's been dominating the story since the start of the new year, and as we've been hearing it's issues like Covid-19 lockdowns. I mean, we're seeing lots of those in Europe, India, the situation is getting worse as well. Now also the progress made with vaccine roll-outs, that kind of thing.

On the supply side, however, basically, we're looking at the potential for additional unplanned production increases from countries that are not really participating in the agreement at the moment. These could be countries within Opec but Opec+, but exempt from the deal at the moment. We're talking Iran, Libya or Venezuela or countries outside the group entirely.

For me, there's no real bigger wildcard than Iran at the moment and the potential return of its oil to the market. If and that's still a big if, US sanctions on Iran's oil are lifted, as part of a return by the US to the nuclear deal, 2015 nuclear deal.

Jessica: And speaking of Iran, there are reports that China has significantly purchased more Iranian crude since January. I understand that some of the crude's origins aren't easily trackable, but does this complicate bringing the US and Iran back to speaking terms?

Nader: Right. So as you say, nowadays it is incredibly difficult to accurately track these volumes from Iran. And that's really thanks to these increasingly creative methods that Iran has had to resort to, to find buyers and outlets for its crude while it's being under the sanctions.

Yet despite the sanctions, what we've been seeing since the start of last year is a marked increase in Iranian exports. We're talking roughly from around the 500,000 b/d mark or even less maybe in late 2019 to somewhere around 1 million barrels per day and with the majority of that going to China.

Now, while that has ruffled some feathers in Washington, I personally don't think this is going to cause any real complications at the moment. After months of almost negotiating through the media, we're now finally seeing some positive signs on the diplomacy front with respect to the JCPOA, the Iran deal.

Now, I also feel that the Biden administration will allow some time and sort of breathing space for progress to be made on that front but if we are several months down the line and still no closer to reaching some kind of agreement, then yes, I think that's when we might see a reaction from the administration in Washington.

Jessica: So if we can just touch on Opec+ again, how is the group dealing with the uncertainty around Iran? Do you think that they're factoring the return of the Iranian barrels in their forecasts at all?

Nader: So when it comes to their own forecasting, what we've seen is at least formally, the Opec technical teams have been assuming that Iranian production will remain largely level until the end of the year. It's done that also with the other sort of Opec+ countries that aren't really participating in the deal, as I mentioned, Libya and Venezuela. But that's not really because they believe that to be the case, it's purely for forecasting terms.

On the Iran issue in particular, it was raised after last week's meeting, particularly how Opec+ would deal with both the increased exports that we're seeing today and the potential of rising barrels in the future, you know, should a deal be reached. Now, the message was and has always remained the same.

Once those barrels are on the market or the sanctions are formally lifted, they will be accommodated. This has always been the case in the past. We saw Libya increase its production dramatically over the last 12 months, and they managed to accommodate those barrels. And if and when Iran returns to the market, they say they will do the same. But for the time being, the issue of Iran is still very much a hypothetical one and the question for the future and Opec+ in general has always said that, you know, it does not really want to deal with hypothetics. When something becomes clear, they will handle it as needed.

Jessica: Thank you so much for your time today, Nader. It was great to have you on the show.

Nader: Thank you. It's really been my pleasure and thanks again for inviting me.

Jessica: For direct access to similar in-depth coverage on issues that affect global oil markets, consider subscribing to Argus Global Markets. You can find more information on this service at www.argusmedia.com. Thanks for tuning in, and we look forward to you joining us on the next episode of The Crude Report.