Indian LPG demand is on the rise in the second half of 2021, after Covid-19 restrictions meant a slow first half of the year. Imports of propane and butane were 7.2pc down on the year in January-June, but were 7.9pc up on the year in July-September, according to data from oil analytics firm Vortexa.

The rise has been partly supported by the easing of lockdowns, and the market is now looking to seasonal import growth in the fourth quarter. And rising household demand, supported by government subsidies, is expected to further buoy import volumes in 2022.

The second phase of Delhi’s Pradhan Mantri Ujjwala Yojana (PMUY) subsidy scheme was launched in August, with the aim of connecting another 10mn households in lower-income rural areas with LPG. This scheme is key to expanding household LPG use.

The success of this scheme is likely to rest on beneficiaries’ ability to pay for LPG, against a background of price rises and cuts to cylinder subsidies, as well as the continuing uncertainty around Covid-19. But New York-listed VLGC owner Dorian LPG is optimistic, saying it expects Indian LPG demand to reach 28.1mn t this year, of which 17.3mn t — around 60pc — will come from imports. India imported a little over 16mn t of LPG in 2020, according to Vortexa data. 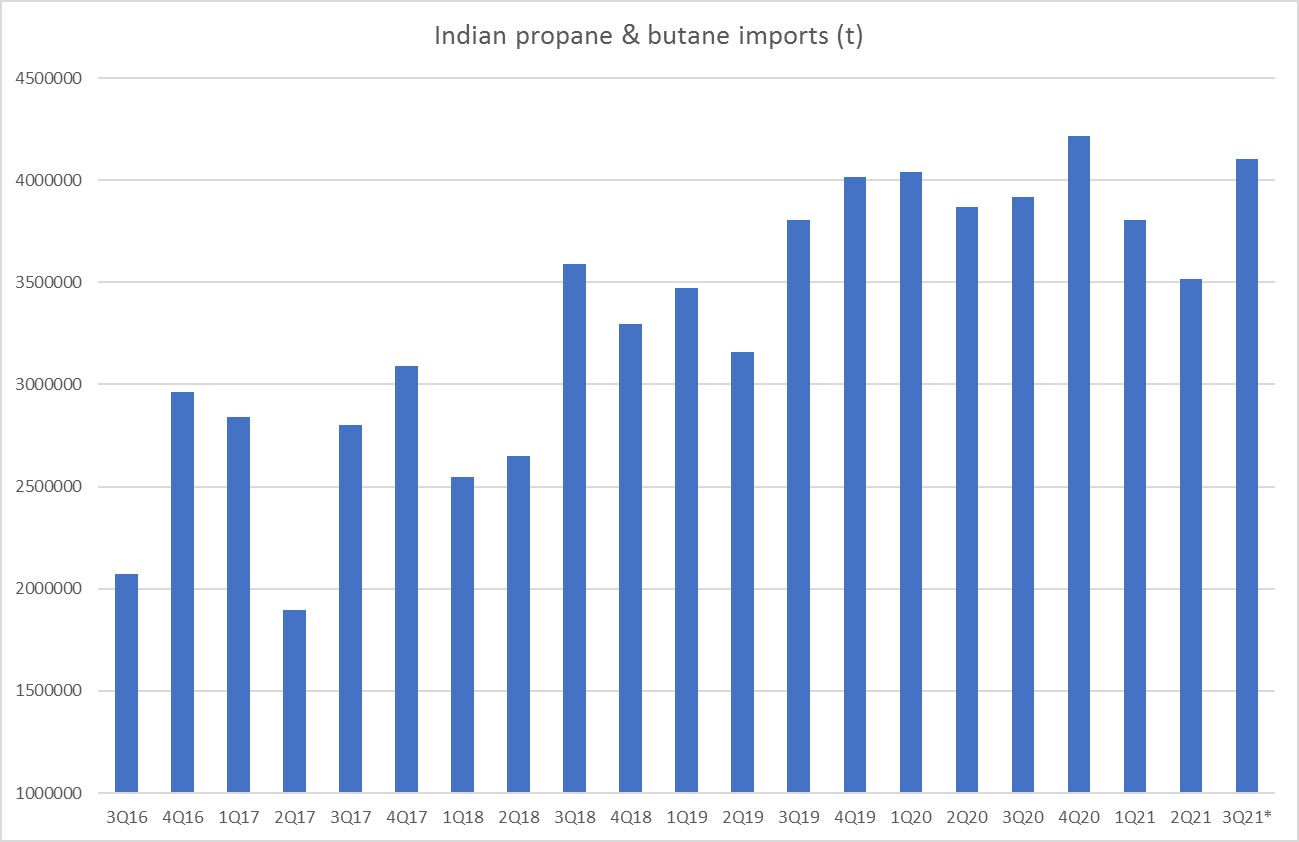 Rising Indian LPG demand will inevitably lead to more demand for VLGCs out of the Mideast Gulf. Unsurprisingly, given its proximity, India has sourced nearly 80pc of its LPG imports from the region this year, with the percentage having risen gradually since 2019. Indian cargo tenders are a regular feature in the VLGC spot market and 72 cargoes have been delivered from the Mideast Gulf to India since the start of July, compared with 68 in the same period last year.

Taken in isolation, higher volumes on the Mideast Gulf to India route are unlikely to make a big difference to VLGC tonne-mile demand. A round trip from Ras Tanura to New Mangalore is 3,316 nautical miles (nm), compared with 13,300nm and 18,600nm, respectively, for voyages on the two benchmark VLGC routes of Ras Tanura-Chiba and Houston-Chiba. And even taking into account the fact that VLGCs regularly split their discharge in India between more than one port — adding to the journey time — the duration of employment would be shorter than on those other routes, unless there was significant waiting time.

But more demand from India would disperse the VLGC fleet, with volumes already rising on the important long-haul route from the US Gulf coast to east Asia. Propane exports from the US Gulf coast to China have risen to 5.27mn t in 2021, compared with 3.4mn t a year earlier and just 35,000t in the same period of 2019, supported by higher propane dehydrogenation capacity in China. 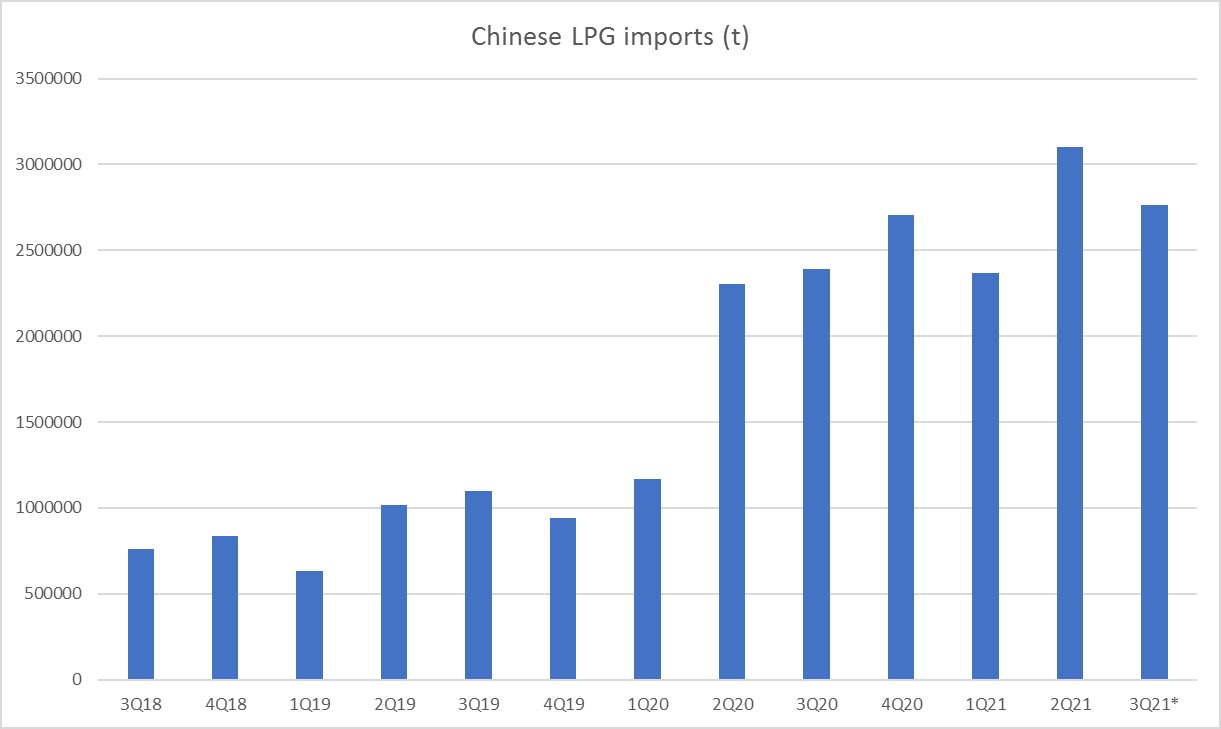 The dispersal of the global VLGC fleet has been under discussion in the market. Time charter equivalent (TCE) earnings have generally been higher in the Atlantic than the Mideast Gulf in recent months. This has encouraged shipowners to ballast vessels towards the US Gulf, tightening the Mideast Gulf market, particularly with Indian cargo tenders buoying demand. Additional demand from the Mideast Gulf could lead to something of a bidding war between the regions.

The VLGC market has been quite volatile in 2021, with rates on the Ras Tanura to Chiba route ranging from a five-year high of $117/t in January to a low of $28.50/t in March. The period of high rates coincided with a wide propane arbitrage between the US and Asia-Pacific, as well as delays at the Panama Canal and Indian ports. More Indian demand and further dispersal of the fleet could magnify the impact of inefficiencies or demand spikes, sustaining the volatility. 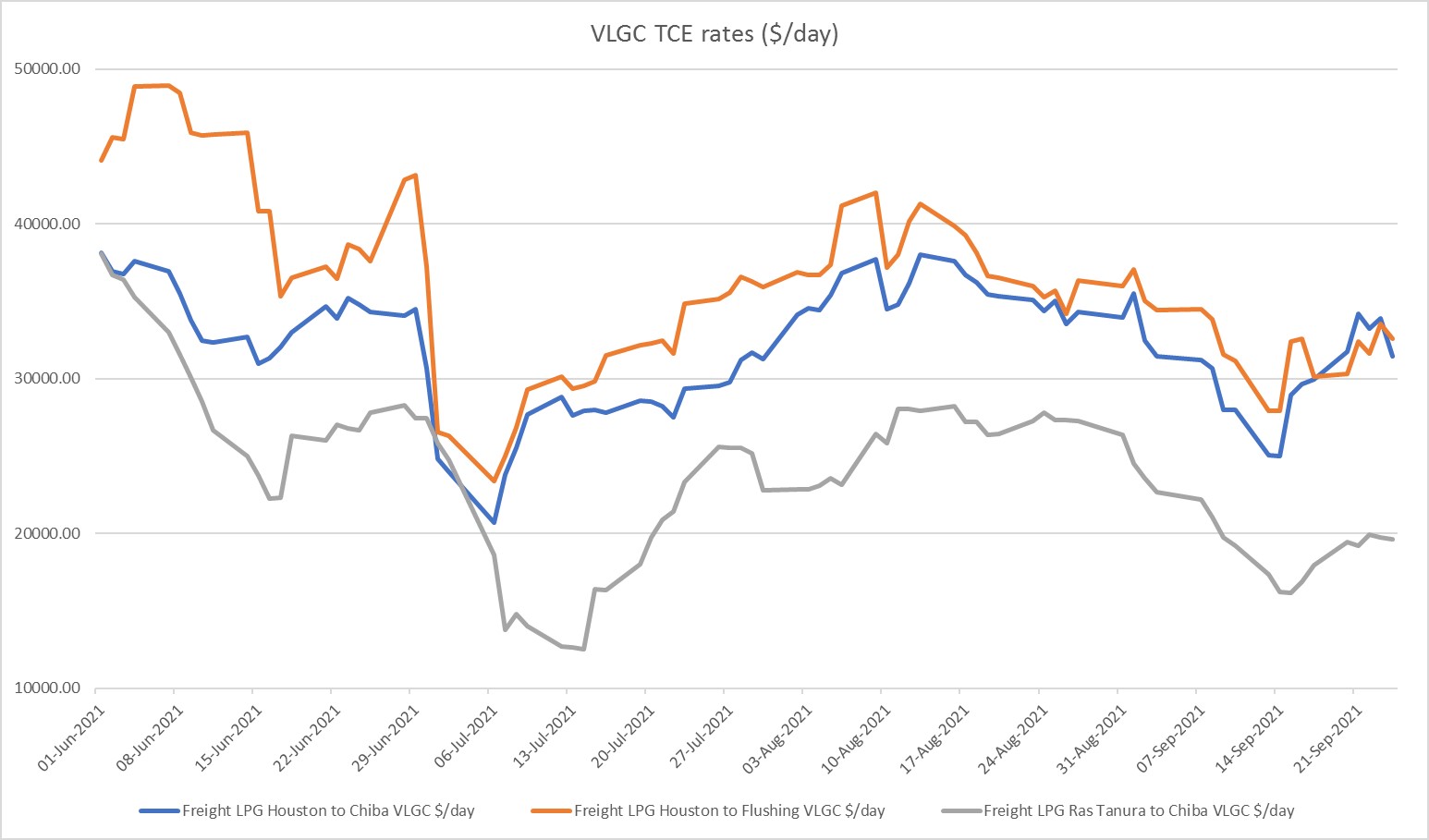 Shipowner Avance Gas expects more inefficiencies in the fleet towards 2025, citing the introduction of the Energy Efficiency Existing Ship Index (EEXI) from 1 January 2023 as a factor. “Of the 313 VLGCs globally, 150 are 2013-built or older, and we expect to see speed reduction,” Avance said.

And global VLGC fleet growth is slowing, with the number of newbuilds for delivery currently scheduled to fall in both 2022 and 2023. Uncertainty about which designs shipowners will choose to comply with upcoming environmental regulations, as well as tighter credit lines after the pandemic and lack of yard capacity following a boom in containership orders have all been cited as factors limiting newbuild orders.

Other factors could offset the growth in VLGC demand. In the short term, Chinese propane demand could be curtailed by power rationing measures in provinces with energy-intensive industries such as steel and chemicals. These measures have already forced some LPG-fed petrochemicals plants to scale back their operating rates.

And in the long term, investment in Indian port infrastructure could reduce waiting times and make single discharges more common for VLGCs. Some improvements have already been made, such as Indian state-controlled refiner Bharat Petroleum’s (BPCL) 1mn t/yr LPG import terminal at Haldia, West Bengal, launched in February in anticipation of higher demand. BPCL said at the time that the terminal would support import growth at the port of around 14pc/yr.

But the stage seems set for higher VLGC demand, which could mean continued volatility in the industry.