But will this be enough to sustain rates? Could China’s continued lockdown measures following their zero-Covid strategy lead to subdued rates? Or could lagging freight rates on Long Range (LR) vessels cause a downward cannibalisation into MR shipments?

Up and over demand from Down Under

Australia’s imports of clean petroleum products (CPP) have been higher year-on-year (y-o-y) by 13.79pc, according to oil analytics firm Vortexa, when Covid-19 lockdowns were in place. The country fully reopened its borders on 3 March to international tourists who are double vaccinated against Covid-19. Australian CPP imports in April are projected to rise by 8.37pc on the month to 2.85mn t and by 13.1pc on the year, based on Vortexa’s data. 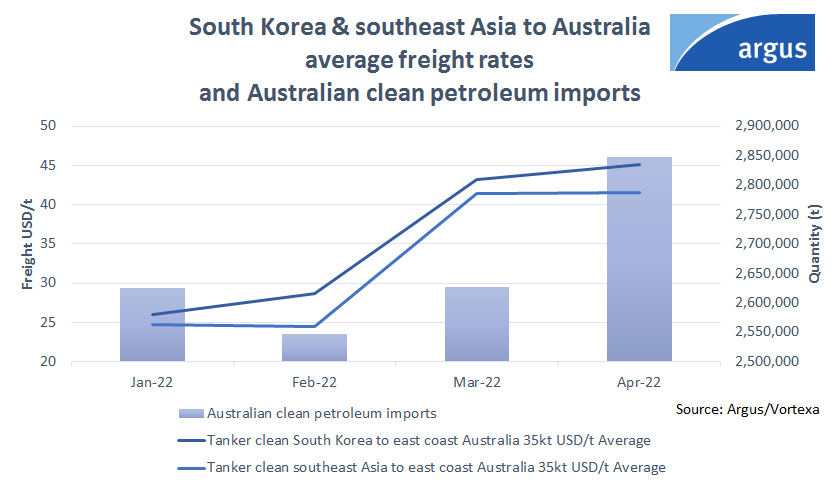 The country’s jet fuel consumption rose by 36pc to 79,700 b/d in February, the highest monthly level since the 114,000 b/d consumed in March 2020, when travel restrictions were first imposed on air travel to combat the spread of Covid-19, Australian Petroleum Statistics (APS) data show. The rise reflects an increase in fuel consumed for international flights departing Australia as international travel restrictions were gradually lifted. 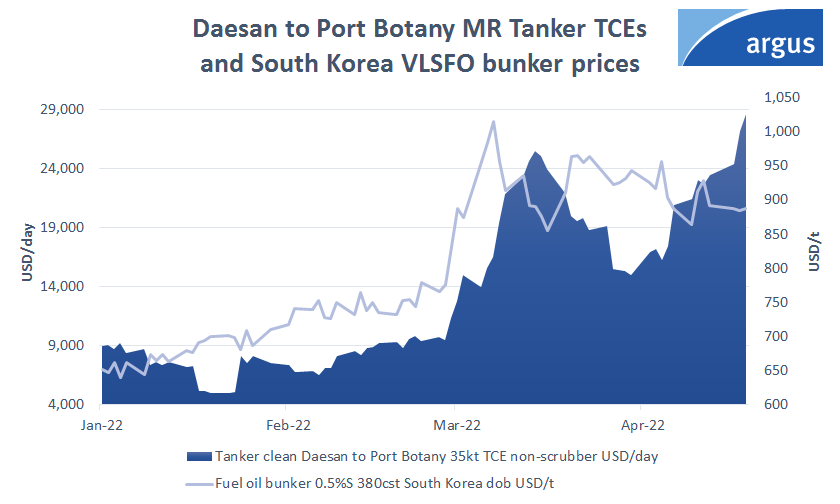 China’s economy has taken a hit and demand for CPP products, such as naphtha, have fallen as the country continues to abide by its zero-Covid-19 policy. There are fewer clean tankers heading to China from the Mideast Gulf with naphtha cargoes, a shipbroker said, which has added to supply woes in the northeast Asia region.

The Chinese polyethylene (PE) market softened with weaker fundamentals, with continued Covid-19 lockdowns in east and south China. Consumption slowed because of restrictions imposed on road transportation since late March. Producers still found it difficult to reduce stocks although operating rate cuts continued. Some downstream plastic converters were ordered to close their factories if Covid-19 cases were found.

The demand outlook remains bearish until this outbreak eases. A zero-Covid-19 policy means the country has put in place tough healthcare measures to keep infections at bay, including mass testing, lockdowns and extensive quarantines. These strict protocols have led to a shortage in pilots and staff at ports, which has subsequently slowed down load and discharge operations and led to supply chain congestions. Port congestions stemming from these lockdown could possibly limit vessel supplies in the region. 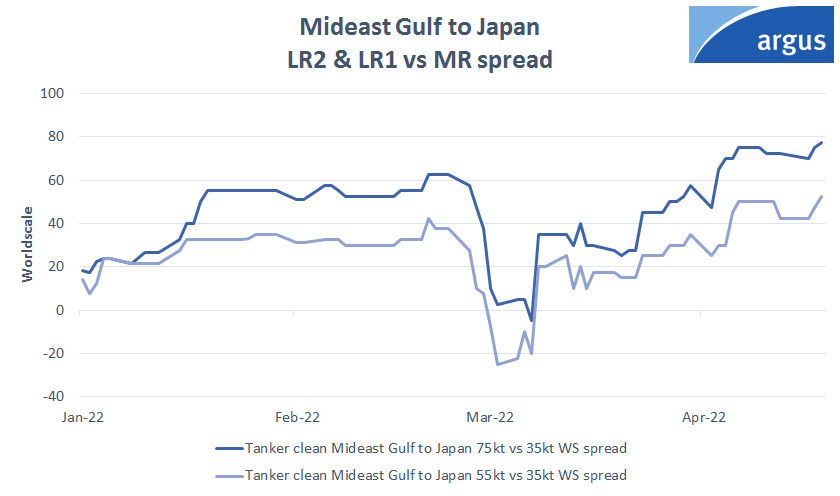 As the gap between LR and MR vessels continues to grow, so does the chance of downward cannibalism. Traders may choose to capitalise on economies of scale, as larger vessels become cheaper and more economical. And this could lead to downward pressure on MRs, as these vessels begin to compete for shipments, or as traders begin to combine cargoes.

The short-term outlook is cautiously optimistic. Demand from Australia should remain firm, as the country will continue to be reliant on CPP imports. Australia currently only has two refineries after the closure of 236,000 b/d of domestic refined capacity last year, with two plants closing and converting to oil product import terminals. The two refineries produced an average of 262,000 b/d of petroleum products in January, down by 5.8pc from 279,000 b/d in December and 38pc below the 429,000 b/d produced in January 2021 when all four refineries were in operation.

Freight rates should also remain supported, as tonnage supplies in the region remain thin. There were only about 16 vessels opening in the northeast Asian region over the next seven to 10 days, another shipbroker said. This is about half the usual quantity of 25-30 vessels when tonnage lists are healthy. High US Gulf freight rates could also continue to encourage shipowners to ballast to the US Gulf after vessels complete their trips in the US west coast.

Weak naphtha demand from China should continue to curtail LR shipments into the northeast Asia, limiting the number of LR vessels that would compete for MR shipments in the region. And a continued outbreak of Covid-19 cases in China would likely cause delays to vessels, which will add to the length of voyages and lower tonnage availability.