Welcome back to Argus’ monthly blog: The US Crude Export Chronicles, by deputy editor Amanda Hilow (@HilowMidpoint). Come back every month for a recap on US crude exports and how they are faring under still-shaky global conditions.

While the hot topic for February 2021 could be described in one word — ice — February 2022 is ending in fire.

Russian troops and armor invaded Ukraine starting on 24 February, leading to fierce fighting in the streets of Kyiv and all over the country. The fighting has sent tens of thousands of Ukrainians fleeing into neighboring countries like Poland, as US and EU allies provide assistance in the form of military equipment and imposing financial sanctions.

Although US and EU sanctions against Russia are still largely avoiding the energy sector, some international banks have stopped issuing letters of credit (LCs) to cover purchases of Russian crude while financial institutions seek clarity over an impending set of fresh international sanctions being imposed against Russia in response to the invasion.

Supply concerns have prevented sanctions from directly blocking Russian oil and gas exports, with some countries in Europe opposing such measures because they are unable to fully and quickly substitute Russian imports with alternative supply.  Russian oil comprises around 40pc of supply to Europe, indicating the region could be short on sour crude supplies near term.

But Russia’s medium sour Urals crude has already fallen to a historic low against the Atlantic Basin benchmark North Sea Dated amid fears that sanctions could still be imposed, while Urals supply to the Black Sea region trend lower.

US medium sour Mars climbed by 90¢/bl against WTI the day following Russia’s initial attack to a 47¢/bl premium, reflecting its highest value against the US benchmark year-to-date, on expectations the grade will be a key choice for global refiners seeking to replace supplies from Russia, while some imports could be displaced from the US Gulf coast. Lack of trade activity the following day — the final day of the March US trade month — resulted in a multi-dollar drop on 25 February to a $2.14/bl discount to WTI, before that discount tightened back to roughly 40¢/bl with the 28 February start to active April trade. 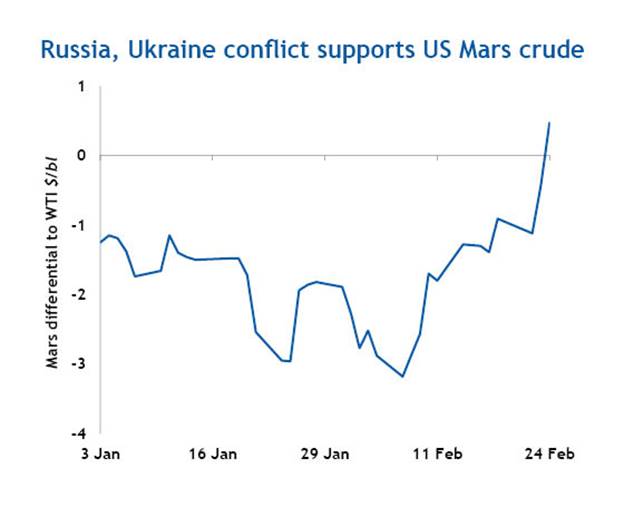 US crude exports climbed for the third consecutive month to 3.48mn b/d in December 2021, with India as the top destination at roughly 672,000 b/d, according to the latest available statistics by the US Census Bureau. Exports averaged 2.98mn b/d during the full year of 2021, down by 6.9pc from the record high of 3.2mn b/d established in 2020 to reflect an average near the 2019 pre-pandemic baseline of 2.97mn b/d. 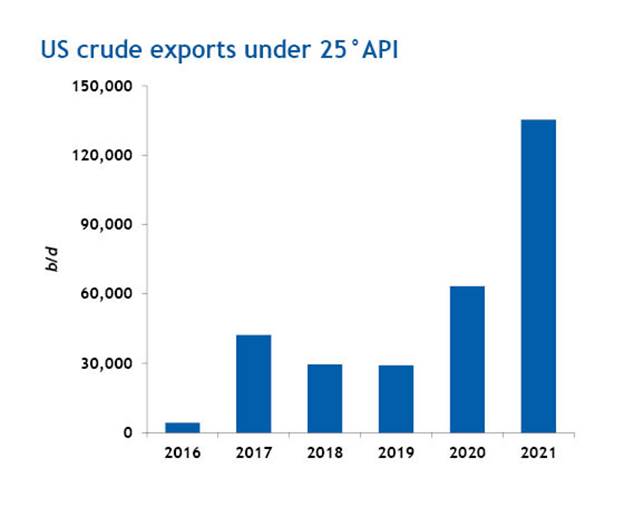 US Gulf Mars crude is positioned to step in as a replacement for Urals crude if the conflict in eastern Europe continues and if new sanctions target Russia’s energy sector.

In the meantime, India, which has historically acted as a spot market bargain-shopper, has stepped in to buy Russian Urals crude at near historic lows as fears of increasing sanctions compelled other global refiners to seek alternative supply.

Indian refiners bought at least 3mn bl of medium sour Urals crude this week, and likely more, in addition to other crude supplies. It was unclear if the purchased volumes will load from Novorossiysk or Baltic ports. Shipments from the former to India are much more common but the ongoing hostilities in Ukraine have cast doubt over trade on cargoes loading from the Black Sea.

Buyers of Russian ESPO Blend are also wary about new purchases on fears that further sanctions imposed on Russia following the Ukraine invasion may impact oil exports or hinder payments.

ESPO Blend can often compete at the US west coast with Alaskan North Slope (ANS) crude. While the April trade cycle is mostly over, an extended conflict between Russia and Ukraine could ultimately lend support to the delivered ANS price at the US west coast on expectations of fewer foreign imports.

Argus is watching, as always, how markets will play out amid heightened geopolitical tensions and a still-early recovery from the worst of the Covid-19 pandemic. Come back again next month for an update on the role of US crude exports in volatile global markets. Until then, the team wishes you a smooth sail.

The US Crude Export Chronicles: December 2021

Crude prices have regained some of last month’s losses, but growth is limited near-term amid surging cases of the Covid-19 Omicron variant and a looming global crude surplus in 2022.

The US Crude Export Chronicles: November 2021

Geopolitics collided with renewed global demand concerns with the emergence of a new Covid-19 variant to culminate in late-month trade with a hefty Black Friday sale for global crude futures.