The third GCC Media Forum in Abu Dhabi last week flashed a glimmer of light on the inner political workings of the six-month Opec and non-Opec production cut deal and portends a potential extension.

The third GCC Media Forum in Abu Dhabi last week flashed a glimmer of light on the inner political workings of the six-month Opec and non-Opec production cut deal and portends a potential extension.

Following the arrival of the prerequisite Saudi Arabian oil minister Khalid al-Falih, the GCC energy ministers convened in a majlis on the sidelines of the forum and hashed out a settlement that will see the block unanimously support extending production cuts into the second half of this year.

“We believe that the extension is necessary,” Kuwait’s oil minister Issam al-Marzouq declared.

The deal between the group’s members is significant. But it remains fragile. Not all members were enthusiastic about an extension.

“We did not say that we agree altogether but we say that we will push for that idea,” al-Marzouq said.

Although there was disagreement, the eventual consensus is more important. “We meet always ahead of any conference or any meeting to make our stand clear, to defend our positions, for the GCC outlook of the oil industry and that is what happened yesterday,” al-Marzouq said.

The GCC may only comprise a quarter of the 24 countries that signed up to the first-half cut target of 1.8mn b/d but they account for more than 35pc of production and almost 49pc of the cut. Its consensus — grudging or not — is a firm message to other members and a strong indication that the cut is likely to be extended. With less than a month to go until Opec ministers convene for the next meeting in Vienna, the timing of the GCC deal speaks volumes about their eagerness to nudge peers into accepting an extension.

GCC support for a cut extension underscores its determination to rapidly reduce the oil supply overhang and accelerate the rebalancing of markets, thereby bolstering the crude prices upon which its members’ economies are dependent.

It is unclear which country or countries proved hesitant or why. But concern about the level of cuts appears to have been an issue.

“I was thinking we maybe could at least relax our commitment a little because… [in] the first half of the year demand does not go up very much, but the latter half of the year, which is the driving season and the end of the maintenance season for the refineries, all of these factors should drive demand up much more,” al-Marzouq said.

And the Gulf producers group is unwilling to be left holding the baby, alone, as the Kuwaiti oil minister made clear: “Our decision was to push for the [extension] deal, if we see consensus among others. We do not want to be the ones that again sacrifice on the behalf of others.”

You can see their point. Not only is the GCC’s allocated cut larger than its share of production but its kingpin, Saudi Arabia — 22pc of the wider group’s baseline production output but more than 28pc of its cuts — has been exceeding its allocated reduction.

So, the key to an extension deal will be to persuade the wider Opec and non-Opec group to stick with it and to maintain discipline — while seeking to attract other non-Opec members to join the production cut. As the Opec countries know, once compliance with quotas and cuts and ceilings begins to erode, so does market confidence.

As it is, Nigeria and Libya will be likely to remain exempt from any extension because of their continuing domestic issues. Iran will insist it retains its special dispensation to produce an average of 3.797mn b/d.

But what of Iraq? In August last year, it resisted cut proposals put forward at the ad hoc meeting in Algiers. It then looked like it might demand dispensation because of its own civil war. Its enthusiasm for further delays to its plans to raise output may prove lukewarm at best. And Iraq is the second-biggest Opec producer, so its agreement and compliance matters rather more than, say, Gabon or Ecuador.

Non-Opec Russia is the largest oil-producing signatory to the deal. It accounts for nearly 22pc of the total baseline production from the countries participating in the cut but only around 17pc of the cut. Of the non-Opec segment, Russia accounts for almost 61pc of the production and 54pc of the share of production cuts.

Its compliance with the deal has been subject to two interpretations — its own and everyone else’s. Moscow signed up to a 300,000 b/d cut but has consistently maintained that, so to speak, “up to” meant “up to”, that 300,000 b/d would be an eventual cut within the six months, not an average. Nobody else read the deal that way but keeping Russia on board was crucial.

And, in the end, Russian cuts have become substantial. “Compliance from Russia is very good. Compliance has risen from 120,000 b/d in the first month to almost 230,000 b/d right now,” al-Marzouq said. But would Russia sign up to a second round of cuts and, if it did, would it stick to it? Russia’s oil minister Alexander Novak has certainly not ruled out an extension but wants to wait until next month to make a decision.

An Opec and non-Opec committee determined at a monthly meeting in Vienna on 21 April that overall compliance by participating countries reached 98pc in March, up from 94pc in February. Despite the overall success in reaching targeted production cuts, in the vacuum left behind US shale oil output grew faster than expected and led to an increase in US oil inventories, tempering the drawdown of global oil inventories. Rising US domestic production, lower exports and seasonal lower refinery runs boosted US crude stocks to a record high of just over 534mn bl in the last week of March, according to Opec.

“Oil prices in the [first quarter of 2017] have been locked within a range as growing US crude inventories, US oil drilling activity and a hefty refinery seasonal maintenance have been counterbalanced by production adjustments elsewhere in the world,” Opec said in its April Monthly Oil Market Report.

Ultimately, for an extension of the production cut to be agreed, it will have to balance the economic pain being felt by participating countries amid rangebound prices with the need to encourage a drawdown of global oil stocks. And for it to succeed, it must be seen to be working. Otherwise, the prisoner’s dilemma comes to the fore. 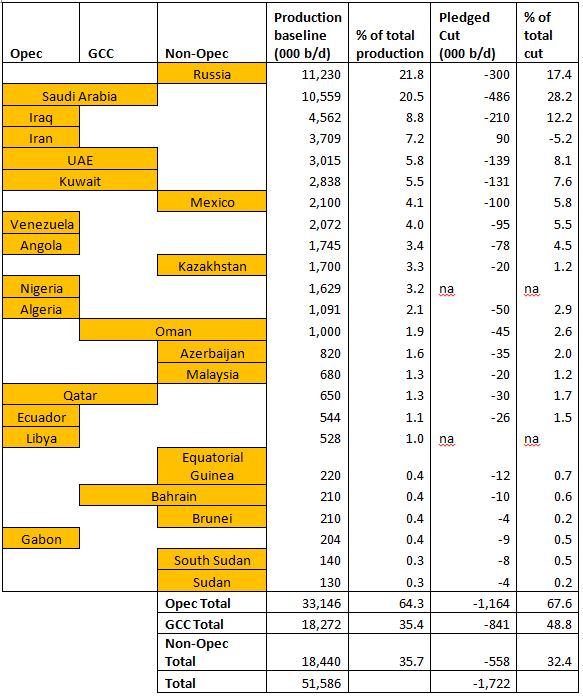