The spike in UK gas prices yesterday demonstrated that the NBP remains a well-functioning hub, while Italy’s PSV struggled to deal with a halt to Tag pipeline flows following an explosion at Austria’s Baumgarten compressor station.

The spike in UK gas prices yesterday demonstrated that the NBP remains a well-functioning hub, while Italy’s PSV struggled to deal with a halt to Tag pipeline flows following an explosion at Austria’s Baumgarten compressor station.

UK wholesale gas prices did what the market is designed to achieve, which is to ensure there are no interruptions to supply.

There was no crisis, despite the recent shutdown of the Forties Pipeline System, the permanent closure of the Rough storage facility and Norway’s largest field, Troll, halting during a cold snap.

NBP prompt prices hit a number of support levels — elastic points on the supply and demand curves — that helped the system balance. 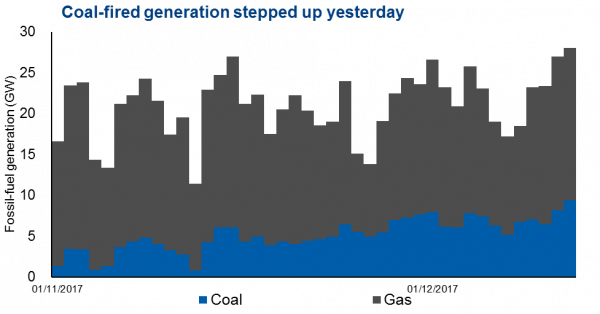 NBP prompt prices also opened a wide premium to the Dutch TTF and Belgian Zeebrugge hubs. Firms increased imports from Belgium through the Interconnector and booked capacity on the BBL pipeline to be able to increase Dutch receipts.

Sendout from the Isle of Grain LNG terminal increased, while a cargo was booked to deliver later this month that will replenish any inventories pulled from tanks during the NBP price spike.

And NBP near-curve prices have returned to an elastic part of the demand curve. The NBP January contract rose yesterday to levels that would make gas uncompetitive with coal, but this morning returned to a price where margins for 55pc-efficient gas-fired plants and 39pc-efficient coal-fired units would be similar.

Small changes in NBP prices in this range would enable power sector gas burn to be displaced by coal if there are more production constraints or a cold snap.

The UK gas market is mostly set up in a way where supply and demand will respond to price signals quickly.

This is not to defend unfettered free markets, which often fail or have unintended consequences. The UK had to burn more coal to meet energy demand yesterday, and the gas price spike exposed the country’s dependence on imports of a key commodity, events that would be seen by some as the market failing.

PSV day-ahead prices climbed to a record high, closing at €78/MWh and hitting €80/MWh after the close of trading. This was easily enough to encourage deliveries from any source, had the gas been available at short notice, but it was unclear how supply would respond.

Italian storage withdrawals, heading into the close of trading, were forecast at 92.9mn m³ yesterday, along with a 65.7mn m³ drop in linepack. But physical withdrawals were running at 154mn m³/d at the same time, and the stockdraw ended up at 122mn m³ over the gas day.

This was considerably above available withdrawal capacity, which was scheduled at 82.3mn m³ at the start of yesterday’s gas day.

A price of €78/MWh would also easily have been enough to offer an incentive for higher sendout at other hubs. But there was barely a response from Italy’s LNG terminals, with sendout from the OLT and Panigaglia facilities close to zero yesterday and this morning.

The OLT terminal offered a delivery slot for 21 December, but this would be too late to capture the value of PSV prompt prices spiking.

The PSV day-ahead market mostly did not provide a price signal for supply and demand. Instead, it headed to just short of the balancing price of €82.80/MWh, which is applied if Italy declares a state of emergency and uses non-market measures.

While Italy declared a state of emergency, it did not resort to non-market measures. And PSV within-day prices slid to around €28/MWh this morning after Tag restarted overnight.