The extension to Rough’s injection unavailability until at least the end of June was priced into the NBP second-quarter 2017 market quickly, but the ripples along the curve have been much smaller.

The extension to Rough’s injection unavailability until at least the end of June was priced into the NBP second-quarter 2017 market quickly, but the ripples along the curve have been much smaller.

Centrica plans not to have any obliged capacity for the 2017-18 storage year and said last week that it would update Ofgem as part of a consultation process.

Much of the focus was on the NBP second-quarter 2017 contract, understandably given that Centrica said explicitly that injection services would not be available in this period.

But reading last week’s update at the same time as December’s consultation document paints a much bleaker picture for the future of Rough.

Centrica pointed to “the uncertainties associated with the differing failure modes” of the wells that had not passed the pressure tests when on 16 February it pushed back the expected restart of injections until at least the end of June.

The consultation document made clear in December that the mode of well failure was important for Rough injection capacity being available.

Centrica will “need to take into account the mode of the well failures” and there is “a possible (but real) risk” that Rough will be unavailable for the 2017-18 storage year, Centrica said in December.

The firm is working out the probability of a blowout following the information gathered about the B11 and C6 wells failing the pressure tests.

The “differing failure modes” Centrica mentioned in last week’s statement is the key here. The greater uncertainty of multiple kinds of failure — rather than the same problem afflicting multiple wells — reduces the chance of Rough returning, at least for the 2017-18 storage year.

Centrica has made investments in Rough, spending £85mn on the facility in 2015 and expecting substantially more expenditure in 2016 and 2017.

But summer-winter spreads have tightened in recent years, reducing margins for storage operators, particularly long-range facilities such as Rough.

Tight storage spreads could offer less incentive to spend substantial amounts to fix wells that have failed, or even to ensure Rough returns at all.

The 47/8A platform, which was more than 40 years old and taken permanently off line last year, was loss making at recent storage spreads.

The remaining 47/3B platform is over 30 years old and Centrica told the Competition and Markets Authority (CMA) that it had “outlasted” its original 25-year design life.

Is a Rough return being priced in?

The second-quarter 2017 market expanded its discount to the front-winter contract almost immediately after Centrica said Rough was not expected to be available for injections until at least the end of June.

But the expansion of spreads further along the curve was more limited. 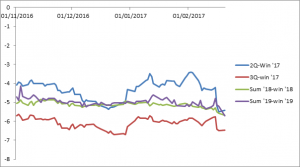 Seasonal spreads beyond the 2017-18 storage year widened slightly, with some market participants saying they were sceptical that Rough would restart.

Liquidity on the winter 2017-18 and winter 2018-19 basis markets has been thin despite the UK’s expected higher import demand from the continent.

But the NBP winter 2017-18 contract has expanded its premium to the TTF with higher expected demand for imports from the continent. The NBP-TTF winter 2018-19 basis market also reached its widest since early November, although remained close to its recent range only moving about 0.46p/th since 15 February. 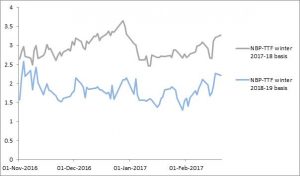 A 0.46p/th change in basis prices has corresponded to an almost 8mn m³/d change in Interconnector flows in recent years, excluding maintenance and periods when NBP and Zeebrugge everyday prices have significantly diverged.

This move could suggest that higher imports are already being priced in for the coming winters given that Rough has long been expected not to return to its former capabilities. 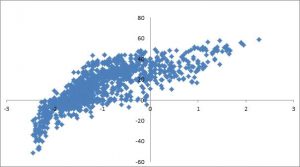 Net withdrawals were only 13.5mn m³/d in the past five winters, when Rough was mostly operating at full capacity. The stockdraw has been about 5.8mn m³/d so far this winter as inventories were limited by the halt to injections in late June. 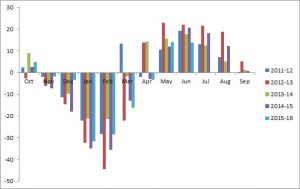