But talk of a nascent consolidation in the sector suggested things could be different this time around. Shipowners with strong enough balance sheets could be looking at other ways to expand, rather than ordering new vessels and adding to an oversupplied market.

Yet in the very large crude carrier (VLCC) segment, ordering has reached its highest since 2008, with 27 tankers totalling 8.5mn dwt added to the order book in the first half of this year, shipping association Bimco said this week.

Most of these are likely to be delivered in 2019. This does not bode well for freight rates from an owner's point of view, and they are the first to say ordering should slow down.

This time the spate of ordering was not prompted by improved freight rates, or a bout of renewed optimism. Rates on the Mideast Gulf to Asia-Pacific route cannot climb as the supply of VLCCs continues to outweigh demand — there are too many ships, chasing too few cargoes. 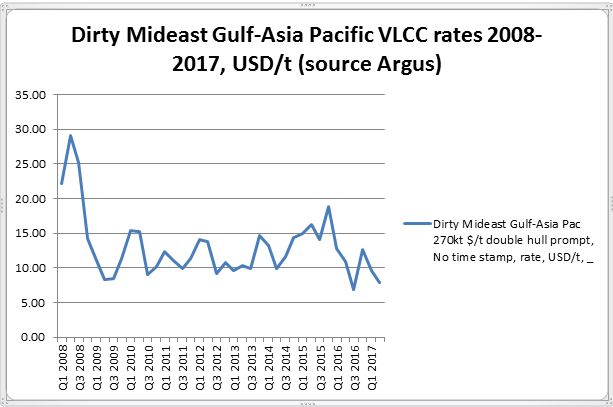 Today, it’s about owning the right kind of tanker.

The forthcoming implementation of two International Maritime Organisation (IMO) regulations, mixed with a certain form of ageism — encouraged by oil firms’ high standards — seem to be pushing shipowners to look for younger tankers.

And a look at the VLCC market shows that there might not be that many candidates with a young enough fleet willing to merge.

Frontline has had two offers to take over DHT rejected.  In its final rejection letter in May, DHT pointed out that its fleet was 6.5 years old on average, including four ships under construction, and that Frontline’s was “relatively older”. As of June 2017, Frontline’s fleet of 19 VLCCs had an average age of just over 10 years.

“To stay competitive in a segment where young ships are highly desirable, we expect that your upcoming capital expenditure requirements will far outstrip our own,” DHT teased Frontline.

DHT in March acquired BW Group’s fleet of nine VLCCs and two newly built vessels, which brought the firm’s VLCC fleet to 30. This includes four new tankers to be delivered next year.

Gener8, another ideal candidate for a merger, is taking pride in its young ships. Its 25 VLCCs, including one to be delivered this year, are on average 2.5 years old. Gener8 says it owns one of the youngest and most modern fleets of VLCCs in the world. The firm’s fuel-efficient eco-VLCCs earn around 12pc more per day than its non-eco ones, it says.

Modern ships command a premium. They also make more sense when it comes to preparing for the IMO’s new rules.

The IMO has capped marine fuel sulphur content at 0.5pc globally from 2020, down from 3.5pc today. Installing scrubbers on a ship's funnel to clean exhaust gases is one way to meet the regulation.

The IMO also requires ships to be fitted with a ballast water management (BWM) system, in order to reduce the shipping industry's impact on ecosystems, from 8 September.

There is still a lot of uncertainty about how the regulations will play out for owners. But it is clear that retrofitting older, limited life span tankers with expensive pieces of kit is unlikely to happen. Spending more money on a younger ship sounds like a safer strategy, and it is a no-brainer when it comes to new vessels as owners are more likely to recoup their investment.

From an economic point of view, as the IMO deadlines loom, a younger fleet makes more sense. And the declining cost of building new ships is proving too tempting for some.

Not all shipowners see doom and gloom. Frontline, which is still looking to grow and renew its fleet, expects market conditions to improve from 2018, as fleet growth slows and older vessels are retired.

"Notwithstanding near-term pressure on crude tanker rates, we believe the market will ultimately return to balance as demand for crude oil continues to increase and vessel scrapping begins to offset the negative effect of newbuilding deliveries," Frontline chief executive Robert Hvide Macleod said as the firm released its first-quarter results.

There is indeed hope that the IMO regulations will increase scrapping levels, as the cost of compliance outstrips returns for older tankers.

Older vessels will increasingly become more difficult to charter. The typical scrapping age for a VLCC is 23-25 years, and IMO regulations could bring it forward slightly.

But older tankers are not going to vanish at once, while younger ones are here to stay.

Euronav chief executive Patrick Rodgers did not sound particularly happy with the recent increase in VLCC orders, saying it was likely to prolong current market conditions. Lower freight rates for longer, were his words.

Bimco pointed out that demolition activity was close to zero across most of 2015-16. And the rate of tanker scrapping so far this year has been lower than in the same period in 2016, according to shipbrokers.

Shipowners are caught between the devil and the deep blue sea — between getting IMO-ready and making their investment last, and flooding the market with new ships, again, at the risk of pressuring rates further.

Or maybe ordering new ships is just what owners do.