Surprisingly high demand for natural gas during the typically ho-hum fall shoulder season in the US northeast combined with new pipeline expansions to boost prices as much as 87pc above year-earlier levels.

September and October are typically a slow time for the US northeast natural gas markets — a time to take a deep breath, look around at what maintenance projects need to get done and squirrel away extra supplies for the cold winter ahead.

But this year was anything but ho-hum. Surprisingly high demand combined with new pipeline expansions for a nail-biting two months, chock full of fundamental shifts that boosted prices as much as 87pc above year-earlier levels. Eastern US storage inventories ended the shoulder season at 826 Bcf (23bn m³), according to the US Energy Information Administration, 11pc below the year-earlier level and 10pc below the five-year average. 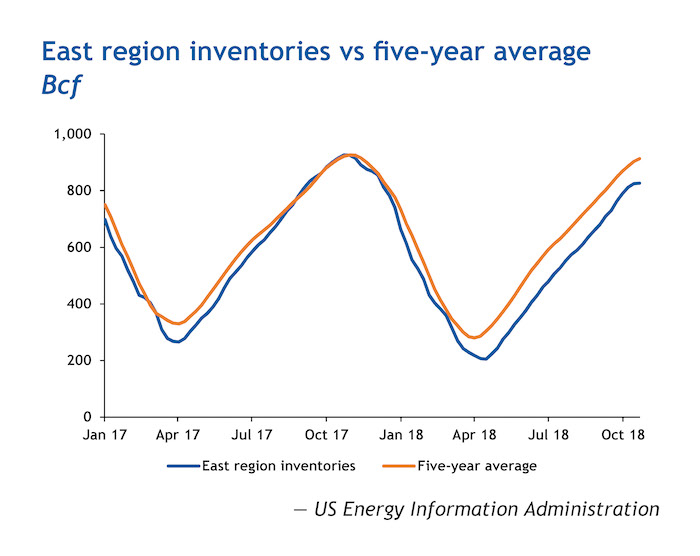 Regional inventories began the injection season in April at their lowest levels in four years, following an intense bout of extremely cold weather in January. And record heat this summer led to smaller-than-average injections into storage facilities, maintaining the gap from year-earlier and long-term average levels.

High demand combined with low inventories resulted in the rising prices. The largest increase in the northeast came at Texas Eastern Transmission (Tetco) M-3, which averaged $2.57/mmBtu this shoulder season, 64pc higher than a year earlier. That index in late October reached an eight-month high of $3.42/mmBtu. Tetco prices have found support as more customers source gas from the western end of its line amid pipeline projects that have increased deliverability to the midcontinent, like the new Rover and Nexus pipelines. 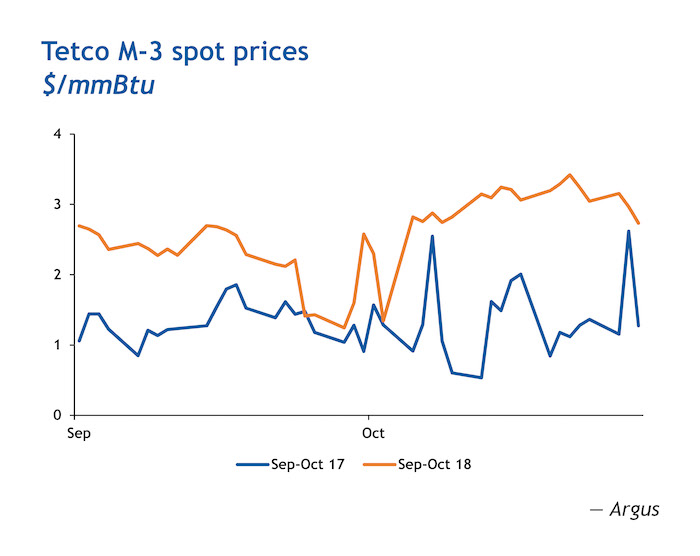 And pipeline expansions resulted in an even larger year-on-year boost in the production region. One such project is the 1.7 Bcf/d Atlantic Sunrise pipeline, which effectively creates a shortcut for lower-priced Leidy Line gas in Pennsylvania to reach Transco's mainline. Leidy Line averaged $2.50/mmBtu in September-October, up by a whopping 87pc from a year earlier as a direct result of the new takeaway. 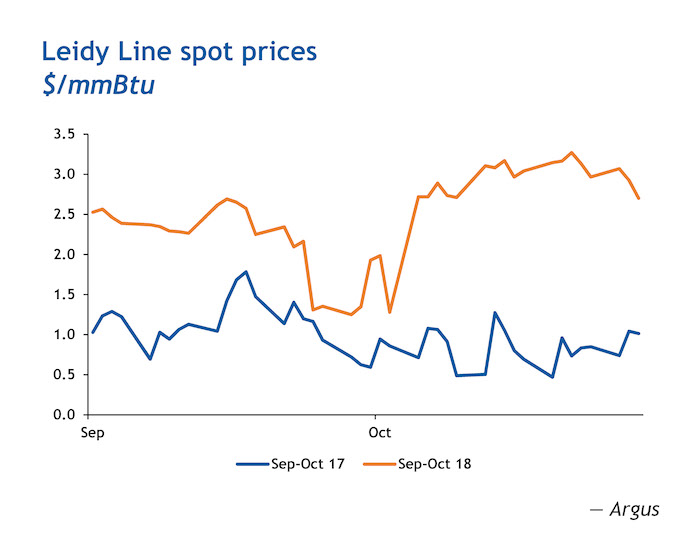 Forward market traders probably thought those weak inventories were the spookiest thing they saw this Halloween season, as 31 October marked the official end of the injection season. Argus forward prices this week suggest plenty of market tightness continuing this winter, with Transco zone 6 New York averaging $9.45/mmBtu for winter 2018-19, and Leidy Line at $4.42/mmBtu. Zone 6 this past winter averaged at $6.42/mmBtu, with Leidy Line at $2.42/mmBtu.

Reconstruction efforts for Venezuela will harness the country's abundant gas reserves and market proximity, not just its oil. Foreign oil companies are positioned to tap Venezuelan gas deposits, but most will hold off until political winds shift.

What is at stake for the private-sector oil and gas investment that has been flowing into Latin America with recent and upcoming elections demonstrating the region's young democracies are shifting?