With financial “intel” now constantly streaming on Twitter feeds, it’s easy to understand why global economic and commodity markets react the way they do — and why market volatility is increasing. Interest rates are negative in Japan and the eurozone, and the US Federal Reserve has been steadily easing rates. As a result, over $16 trillion of the global bond market is now locked into a sub-zero yield. There is also attention on the fact that long-term US bond yields have recently fallen below short-term yields, which some view as an indication of an imminent recession.

But market sentiment overshadows relatively healthy global crude market fundamentals. Forecasts across the board expect fairly strong crude demand growth. While some see average growth of 1.1mn-1.2mn b/d this year and next, Argus’ view as part of Argus Fundamentals and the Argus Crude and Refined Products Outlook is that growth will average 1.4mn b/d, supported by an expected boost from the new IMO bunker fuel specifications that come into effect at the start of 2020. 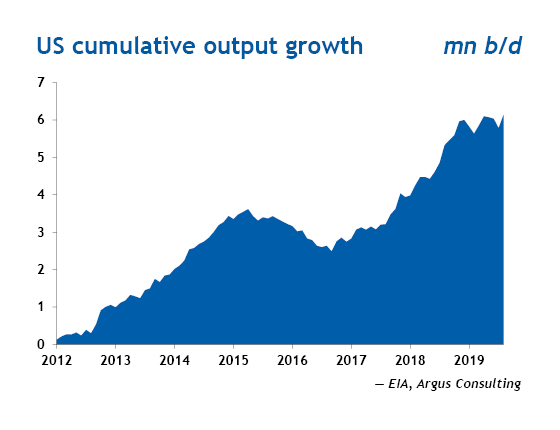 So how well-balanced do we expect the global crude market to be? US cumulative production growth since the beginning of 2012 looks likely to remain flat at 6mn b/d, with increased production from majors such as ExxonMobil and Chevron being offset by slowing investment by smaller independent operators, which are struggling to maintain spending at levels that offset the natural decline in existing wells.

Opec continues a disciplined performance in restraining output — the group’s production fell to a five-year low of 29.56mn b/d in July, and Saudi Arabia has reportedly rebuffed recent nominations by buyers for an extra 700,000 b/d of supply in September compared with August. But despite this, oil stocks in OECD countries are still in surplus, which we expect to persist until the end of 2020.

If producers want $70/bl oil prices, they will collectively need to cut output further. To achieve this, we estimate that Opec production would need to be 28.7mn b/d by the end of 2020, or 28.1mn b/d for that price level to be achieved by mid-2020. This will be a tall order and will test keenly the resolve of the key Opec Mideast Gulf producers, most of all Saudi Arabia, which inevitably would be required to carry most of the burden. There is no doubt that while Riyadh has reduced production by 1mn b/d since October, it recognises that Iraq has yet to make any meaningful contribution to market management.

US sanctions on major oil exporting country Venezuela are having profound effects on the global oil trade, prompting US refiners to seek alternative crude supply and shifting Venezuelan crude flows more toward Asia.

Cushing: The heart of US crude is still beatin’

Podcast: Crude is rushing past Cushing on its way to the coast, but the traditional price setting center of the US oil industry is likely to maintain its role for years to come.