The news of potentially widespread and lengthy fraud cases seems to have galvanised European biodiesel producers.

The level of scrutiny applied to Europe’s growing waste-based biofuels industry will be transformed irrevocably following news of a Netherlands-UK joint investigation into fraudulent biodiesel trading.

The investigation — led by the Netherlands’ ministry of infrastructure and water management (ILT) and the UK’s Serious Fraud Office — will not conclude for several months, but the accusations are alarming and date back several years.

As the EU continues to rely on waste and residue feedstocks for biofuels to meet its ambitious climate targets, improvements to certification mechanisms are now inevitable. The European Waste-to-Advanced Biofuels Association (Ewaba) told Argus it has presented certification body ISCC with proposals for changes to certification schemes, and will announce them in September.

Ewaba’s secretary-general Angel Alvarez Alberdi says the association will also introduce voluntary commitments for its more than 20 members to improve those certification schemes.

Under the EU Renewable Energy Directive (RED), deliveries of biodiesel counted towards a bloc-wide renewables quota for transport fuels are sold with an accompanying Proof of Sustainability certificate (POS). The POS is issued by voluntary schemes recognised by the European Commission.

The ILT revealed in a 20 May report that an unnamed Dutch company incorrectly designated 31.6pc and 22.5pc of “sustainable” biofuels sold in the Netherlands in 2015 and 2016, respectively. “This biodiesel was sold with a fake POS,” it said, adding that this caused a total of 760mn kg of excess CO2 emissions in those years.

Accordingly, the entire EU structure for ensuring complex supply chains for an array of virgin and used vegetable oils certified as being sustainable has come into question.

This is particularly the case for used cooking oil, which is designated as a waste feedstock under Annex IX of RED and had a 56pc share of total biofuels feedstocks used in the Netherlands in 2018, according to emissions authority NEa.

The resulting biodiesel product, known as Ucome, is double counted by energy content towards the country’s renewables mandate, an incentive practised in many EU member states.

Questions over the monitoring of biofuel sustainability have been asked before. In a 2016 audit the European Court of Auditors asked: Have the Commission and Member States set up a reliable certification system for sustainable biofuels?

It concluded that because of “weaknesses in the Commission’s recognition procedure and subsequent supervision of voluntary schemes, the EU certification system for the sustainability of biofuels is not fully reliable”.

The court of auditors added that the commission had granted recognition decisions to voluntary schemes that did not have appropriate verification procedures. These procedures would ensure that the origin of biofuels produced from waste was indeed waste, or that biofuel feedstocks grown in the EU fulfil the bloc’s environmental requirements for agriculture.

The news of potentially widespread and lengthy fraud cases seems to have galvanised European biodiesel producers, which have rallied around the proposal of an EU-wide database for sustainability certificates. German biofuels association VDB says it shared the court of auditors’ criticism at the time, and pointed out further weaknesses and the need for action in discussions with the body.

“An EU-wide database for sustainability certificates, as it currently only exists in Germany, is still missing,” it said. VDB also called for an increase in unannounced inspections by state authorities as well as more effective sanctioning of misconduct.

Days before the SFO and the ILT announced their investigation, Biodiesel Kampen, a large Dutch producer of UCO-based biodiesel, had its ISCC sustainability certification — one of the EU’s more prominent voluntary systems — removed.

With Biodiesel Kampen unable to sell certified Ucome, the spot price of the biodiesel grade has risen to long-term highs in recent weeks. The biofuel had been valued on a spot basis at an average of $968/t fob ARA range during April, climbing to $1,035/t in June and $1,073/t in July.

The hike in spot values also bleeds into related biofuel ticket markets, not only in the Netherlands. The price of German credits, representing the cost of compliance with the country’s renewables mandate, has risen significantly in recent weeks. 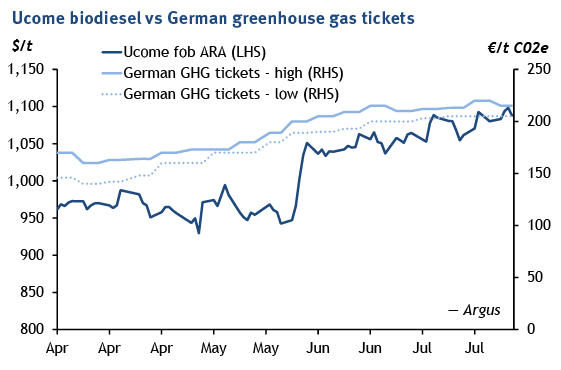 The market does not anticipate significant price relief anytime soon, especially against the backdrop of rising renewables mandates from 2020.

Ewaba expects an EU-wide database to be introduced in June 2021, with the implementation of RED legislation from 2021-30. For the still maturing biofuels market where issues around tracing and accountability have been questioned for years, this will be a welcome step.

Kelley Kizzier is associate vice-president of international climate change at the Environmental Defense Fund. A long-time climate negotiator, she co-chaired the UN negotiations on article 6 of the Paris climate agreement from 2015-18.

Not all ‘net zero’ targets are created equal

When a country reaches net zero emissions it has, in effect, ended its contribution to global warming. But not all net zero goals are equal.

A few weeks ago, the outlook for German diesel demand looked quite clear — consumption in Europe’s largest market is falling for the first time in more than a decade because diesel cars are going out of fashion. But this is not quite true. The picture is far more comple...