Saudi oil minister Khalid al-Falih may have “… no doubt… that US shale will peak and decline like every other basin in history”, but with Opec market share steadily decreasing, the question truly is when?

As crude producers struggle to defend prices in the face of the steady rise in US production and exports, Opec has had to accept an equally steady loss of market share — primarily in Asia-Pacific and Europe. And US crude exports are expected to exceed 5mn b/d before any “decline” in US shale production sets in.

Looking regionally, in the first half of 2019, Asia-Pacific is by far the most important destination for crude shipments, accounting for around 55pc of all inter-regional trade. Europe is the next largest importer with almost 25pc, while North America pulled in just over 19pc. Understandably, imports to Asia-Pacific and Europe are generally growing, while flows to North America are shrinking as more demand is met locally. 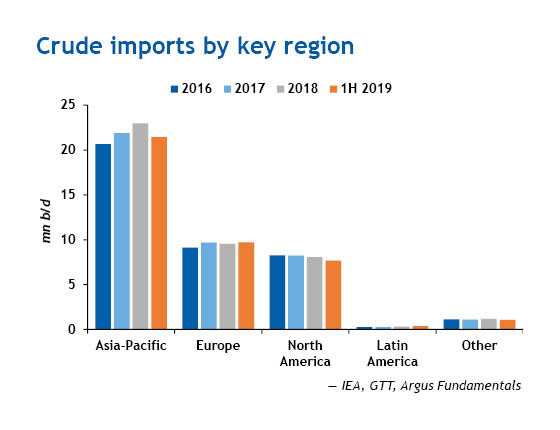 With a market share of almost 70pc in 2016, Middle East Opec producers have long enjoyed the dominant role in supplying crude to Asia-Pacific refiners — and with it the ability to command a healthy price premium. This is now changing fast. In volume terms, flows have held up well until this year at around 14mn b/d, but market share has been eroding steadily. The Middle East’s share of the Asia-Pacific market fell to under 60pc in the first six months of this year. 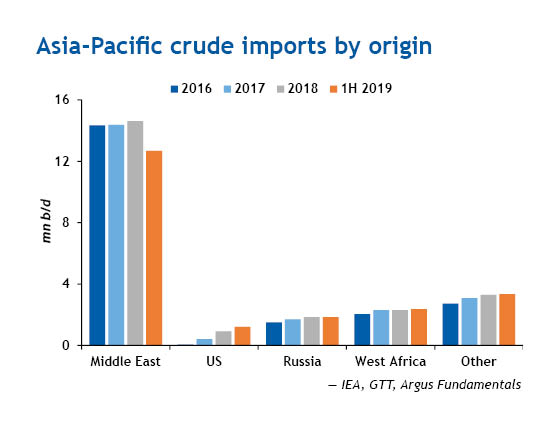 The beneficiary of course has been US producers. Shipments to Asia-Pacific from the US — the majority of which is WTI — are now averaging close to 1.5mn b/d, even with Chinese buyers mostly reluctant to buy US crude because of the countries’ trade war. Interestingly, from the point of view of producer group dynamics, Russia has also managed to increase sales and market share in the region — a fact no doubt not lost on Opec.

The situation is similar in Europe. Overall imports to the region are up by around 600,000 b/d on 2016, but Middle East crude flows are down by around 300,000 b/d, and by 500,000 b/d if compared with 2017. It is interesting to see that Russia has also lost sales to competing US crude, with its share of the European market falling by 5pc, while the US has increased exports to the region.

Opec won’t see much relief from the US export boom anytime soon. The 670,000 b/d Cactus 2 pipeline to the US Gulf coast is expected to start up in September, and in 2021, the Wink to Webster pipeline in Texas is scheduled to start delivering 1mn b/d or more of crude and condensate. Monthly US crude exports have regularly exceeded 2.5mn b/d since the end of last year and are now consistently hitting above 3mn b/d. The harsh reality facing Opec, Russia and others is that before long, US crude exports will be at 5mn b/d or perhaps even more.

A potential hope for Opec is that the growth in US light tight oil production will slow or even halt, leaving this new capacity under-utilised. The EIA’s latest Drilling Productivity Report suggests that this production will rise by 49,000 b/d in August – sharply lower than the 158,000 b/d month-on-month growth recorded as recently as April. Inevitably, production growth will slow as operators refocus their activities on less productive acreage. But the latest data also show that average rig productivity is rising, suggesting that companies may be having some success in employing technology and new techniques to offset this.

Opec is steadily losing market share in the two key global import markets of Europe and Asia-Pacific, and there is nothing the organisation can do about it — unless it is willing to adopt the output and market share maximisation strategy it pursued in 2014, at the expenses of price, which is highly unlikely.

Argus Consulting Services produces short and long-term reports analysing and forecasting supply, demand, trade and pricing, as well as tailored-made research. These include Argus Fundamentals and the Argus Crude and Refined Products Outlook — visit these pages for a sample report and more information.

The narrative of restoring a glorious past is only inspiring for those who prospered in pre-Chavez Venezuela. It resonates less among younger Venezuelans born after Chavez came to power, many of whom have fled, and older ones who still revere him. A vision that looks fo...

China is the world’s largest crude importer, and the Shandong market accounts for over a third of all receipts. This northern province, home to most of the country’s independent refiners, plays an increasingly prominent global role, with prices paid there helping set th...