US crude oil exporters returned to the WTI benchmark to offset some of the pricing volatility caused by spiking freight rates.

US producers are shifting back to selling their crude against a WTI price after moving to the Brent benchmark late last year.

The return to WTI-based pricing for US light sweet crude exports follows disruptions in the freight markets. Spiking freight rates in October made long-haul export sales unprofitable and led to instability against Brent. Some US producers reverted to marketing their cargoes against Nymex calendar-month average, or CMA, WTI for the November trade month. The same producers had moved to pricing against Ice Brent futures in late 2018 and early this year.

Occidental Petroleum is now primarily marketing its cargoes priced against WTI Houston in the fob market. The firm is one of the larger WTI exporters and helped drive a shift towards Brent pricing in the first quarter of this year as it led US shipments to Europe. One other private-sector seller on 31 October offered a cargo from Houston at a $3.15/bl premium to Nymex CMA WTI, ultimately reflecting an outright value more than 15¢/bl higher than the level at which similar cargoes were offered against Ice Brent futures.

WTI fob Houston — the price of WTI crude loading at docks around Houston — averaged just over a $3/bl premium to CMA WTI during the November trade month. This was a drop of little more than 10¢/bl from the grade's average premium to CMA WTI the month before. By contrast, cargo differentials against Ice Brent were more volatile (see graph). The WTI fob Houston discount to Ice Brent futures fell by over 80¢/bl from October to November trade, widening from a $1.25/bl average discount to Ice December Brent to an average discount of nearly $2.10/bl to January Brent amid instability in the market.

Export economics became unworkable in October as US sanctions on affiliates of Chinese shipping firm Cosco pushed freight rates to record levels. Long-haul crude economics were already struggling after attacks on Saudi infrastructure left markets extremely volatile in mid-September and after Beijing placed tariffs on crude imports from the US in retaliation for US tariffs on Chinese goods.

The surge in geopolitical uncertainty is exacerbating volatility in the global oil markets at the same time that supply in the North Sea is tightening. December loadings of the five grades that underpin the North Sea Dated benchmark will drop to 940,000 b/d, down from November's 1mn b/d, largely driven by sharp decreases in Brent and Forties output on a string of outages.

US crude exports averaged 2.73mn b/d in August, only slightly higher than the previous month, as arbitrage dynamics limited trade opportunities. But outbound crude flows look poised to rise again in November and December as the markets stabilise.

At least 2.36mn b/d of US crude was exported to non-Canadian destinations in September and October, preliminary tracking data compiled by Argus show. South Korea remains a key buyer, largely taking light sweet crudes such as WTI or Permian-quality West Texas Light (WTL), with the UK and the Netherlands not far behind in terms of the amount purchased. Nearly 40mn bl has already been scheduled to depart the Gulf coast in November for destinations in Europe, Asia-Pacific and Latin America.

Another 9mn bl is planned for December, including the first of five 600,000-1mn bl WTI cargoes purchased by Vietnam's Binh Son Refining (BSR) in its first multi-month tender seeking crude for the 145,000 b/d Dung Quat refinery in January-May. Other Asian buyers that have taken US crude on a term basis are India's IOC, Japan's JXTG and Taiwanese refiner CPC. 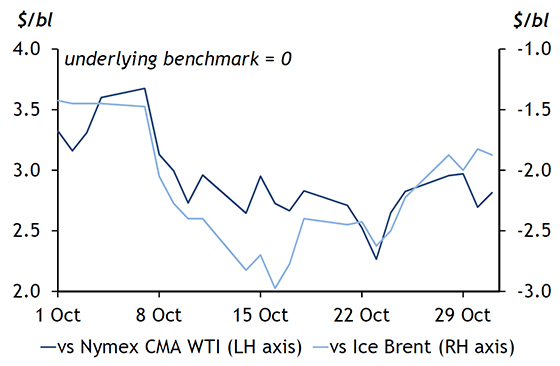 Crude tanker rates hit 10-year highs then retreated. Where to next?

Decade-high tanker rates have prompted crude importers to look closer to home for supply. But the question remains: Can these elevated rates be sustained? Rates have since corrected down significantly. But even these lower rates are higher than anything since 2016, prio...

The China Connection: Xi vs Trump

Podcast: Xi vs Trump. How have global and Chinese and US commodities markets shifted with each blow of the trade war?