Welcome back to Argus Media’s monthly take on US crude exports, with Amanda Hilow (@HilowMidpoint) and Eunice Bridges (@eunicebridges12). We will unofficially call this month’s post The Corpus Christi Crude Export Chronicles, in honor of the booming export traffic that’s emerging from that port city.

In September the south Texas port overtook Houston as the largest loading point for US crude — Corpus Christi exports rose by nearly 400,000 b/d on the month to 1.15mn b/d, while Houston loadings lagged behind at just 750,000 b/d in the same period.

This wasn’t a complete surprise, as September marked the first full month of Permian crude flows to Corpus after the 400,000 b/d Epic and 670,000 b/d Cactus 2 pipelines started up. The Corpus Christi market is dominated by two sellers — independent producer Occidental and trading firm Trafigura. Both have term contracts for pipeline capacity to, and loading capacity from, terminals in Corpus Christi and Houston. Yet due to a narrowing pipeline arbitrage from Midland to Houston, key US light sweet WTI crude was shipped via its new outlets in Corpus rather than Houston. 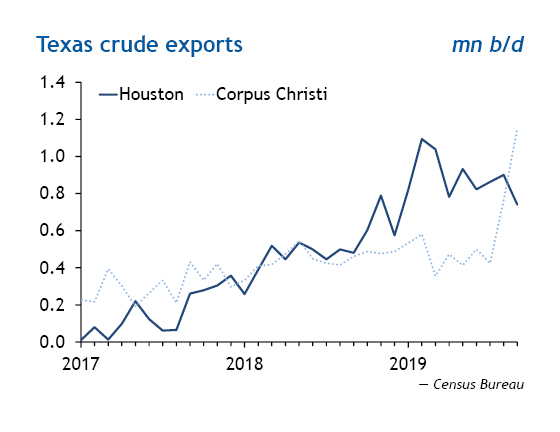 Many factors weighed into the September export data, including US sanctions on a large shipping company toward the end of the month and a 5pc tariff on US crude imposed by China on 1 September.

Still, US crude exports came back strong, rising to a near-record high above 3mn b/d. China continued to import US crude despite the tariffs, taking about 201,000 b/d, although that was down from 246,000 b/d in August. Canada and South Korea continued as the top two importers of US crude in September with 25 other countries on the list.

So, back to Corpus Christi, where the crude infrastructure buildout continues.

NuStar Energy said it moved about 422,000 b/d of crude to its docks in Corpus last month as volumes have soared with new pipeline connections. The company's overall crude volumes in Corpus Christi averaged 591,000 b/d in October, double the receipts from July.

Separately, Moda Midstream has completed nearly half of a major expansion at its crude export terminal at Ingleside, near Corpus Christi, adding about 4.5mn bl of storage, with another 5.5mn bl expected in May.

And lastly, a non-Corpus Christi item. Energy Transfer said it is taking “a number of steps” on a project to load very large crude carriers (VLCC) connected to its terminal in Nederland, Texas.

Continuing our Corpus theme, we can say with certainty that more crude is heading that way.

Phillips 66 Partners started initial commercial service on its 900,000 b/d Gray Oak pipeline from the Permian to Corpus Christi destinations. But Houston could also get some of that crude as Gray Oak shippers can connect to Kinder Morgan's 300,000 b/d crude and condensate pipeline (KMCC) to the Houston Ship Channel.

The increased export volume as of mid-August is depressing spot prices for cargoes loading out of Corpus Christi. Trades from the port averaged nearly 25¢/bl below the Houston market during the November trade month. Corpus Christi prices even fell to a 75¢/bl discount to Houston at one point, reflecting the supply surge from the new pipelines.

And preliminary market indications have revealed fob cargoes from Corpus will maintain a sizeable discount to Houston cargoes in December and at least through early January. The spread between the two locations may narrow over time, but we’ll see how it plays out in the end.

We hope to see you again for next month’s analysis on US crude export flows and dynamics. Until then, smooth sailing.

The US Crude Export Chronicles: September 2019