Decade-high tanker rates have prompted crude importers to look closer to home for supply. But the question remains: Can these elevated rates be sustained? Rates have since corrected down significantly. But even these lower rates are higher than anything since 2016, prior to the recent super-rally.

Extreme peaks and troughs are nothing new to the shipping market, which is considered three times more volatile than the crude oil market. The last major increase in crude tanker rates took place in 2015, when low oil prices spurred demand and the Mideast Gulf-Asia very large crude carrier (VLCC) rate more than tripled to a seven-year high in the space of 50 days. 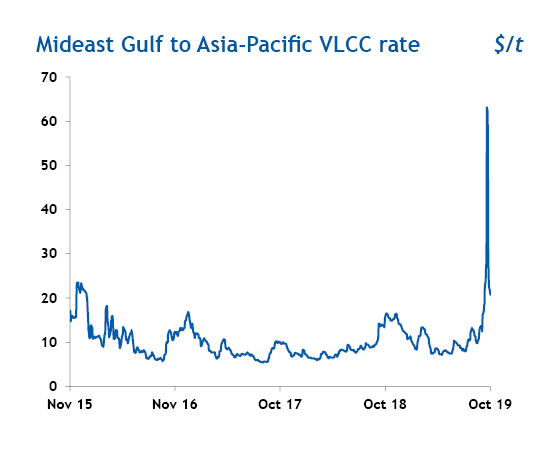 But that surge in rates, which led to a one-year period of volatility and healthy earnings for shipowners, was driven by bullish market fundamentals.

This rally is different as it is politics, not fundamentals, at the helm. While underlying fundamentals in today’s market appear strong, with rising time charter rates supporting that view, political decisions have driven the rally. And given the greater volatility seen among policymakers of late, that makes tomorrow’s market harder to predict.

The first factor is US sanctions on Cosco Shipping Tanker Dalian, a subsidiary of Chinese shipping giant Cosco, for allegedly transporting Iranian oil. While those sanctions are continuing to tighten the tanker market, as charters avoid tankers tied to the parent company, a change in what has been a mercurial US sanctions policy could bring those tankers back to the market again. Just yesterday, in a bid to limit the effects of these sanctions, the US Department of Treasury set a 20 December deadline for entities to cut business ties with the Chinese shipping subsidiary, potentially making those non-Dalian Cosco tankers available for hire again. There is also precedent for the US to delist companies from shipping-related sanctions. In July, the Department of Treasury removed shipping company PB Tankers from its sanctions list after the company terminated its chartering contract with Cuban state-owned Cubametales.

A second political driver to the current rates: Top ten crude tanker charterer ExxonMobil – and maybe other oil traders - have begun [rejecting the hundreds of oil tankers that visited Venezuela in the last year, which has caused further disruption to the tanker market. An adjustment in US sanctions policy toward Venezuela – while unlikely as long as Nicolas Maduro remains in power - could cause ExxonMobil to reconsider its chartering policy, which is more restrictive than what US sanctions stipulate, and start employing those tankers again. This week, the US extended waivers from sanctions for five oil companies, including Chevron, to continue operating in Venezuela, showing some flexibility from the US Department of Treasury toward US oil majors vis-à-vis Venezuela sanctions.

To understand if this surge is a short-term blip or sustained rally, supply and demand can’t just be your guide. Instead, wait and see what world policy makers, particularly those in Washington, have to say.