Prompt European LNG prices have fallen to a discount to US gas prices in recent days, raising the question of whether US terminal operators could import LNG again.

The global gas industry has spent much of the past five years discussing two great waves of US liquefaction growth, dubbed ‘freedom gas’ last year.

Buyers have signed up for volumes, producers elsewhere in the world have attempted to maintain their respective market shares, and the freight market has entered a newbuild bonanza to load the additional LNG.

But as the first wave of growth ends, could US operators really bring LNG produced elsewhere to their terminals? Yes: the economics work – but these volumes would be more likely to be re-exported at a later date than regasified for use in the US.

Weak LNG prices to slow — but not halt — exports

LNG prices in Europe and Asia have fallen to below the US’ own Henry Hub – the market that sets the price of the gas that LNG producers like Cheniere liquefy for export, plus a margin for operating costs.

Cheniere’s customers pay around 115pc of Henry Hub, with the operator itself paying 107-108pc.

Buying LNG produced elsewhere at a discount to Henry Hub would allow US operators to meet their supply obligations, while cutting their own procurement and liquefaction costs.

Low delivered prices in Europe and Asia have already prompted buyers from US export terminals to turn down around 20-25 June-loading cargoes, market participants said, writing off fixed take-or-pay liquefaction fees. And European prices are low enough to suggest that operators themselves would probably choose not to market the cargoes. And there have been signs that operators themselves may opt not to lift cargoes, with Cheniere seeking to buy LNG from third parties for delivery to its customers in Europe.

July-August LNG prices sitting comfortably below US gas prices mean operators may yet see further cancellations in the third quarter.

But June’s cancellations are only about a third of the first-quarter monthly average of 66 cargoes shipped from the US, suggesting that US exports are unlikely to grind to a halt and that the likes of Cheniere will still have a significant number of cargoes to provide in June, and potentially also in July-August.

That said, firms that have not turned down their June cargoes probably already sold them before European and Asian prices weakened, locking in their margins.

Join the webinar
We're discussing this topic and other key developments for LNG in a series of free webinars. Join us for part 1, "US LNG and the impact of Covid-19", on Thursday, May 7.
Register here

Slower scheduled exports would free up berthing slots for discharging carriers, and with a combined working storage capacity of 3.08mn m³ LNG they have ample space to store imported LNG.

At prices yesterday, operators could bring west African LNG to the US at around $1.67/mn Btu, and resell the cargo for loading in July at a profit of around $0.09/mn Btu or in August at $0.36/mn Btu, minus any storage losses.

A similar contango in Henry Hub prices means that if Cheniere instead opted to liquefy US gas for export, priced at 107-108pc of Henry Hub, the operator would chalk up $0.41/mn Btu and $0.26/mn Btu losses for cargoes loading in July and August, respectively.

That said, if US LNG producers opted to buy in a large enough volume of LNG that it would significantly reduce demand at Henry Hub, this could reduce the premium that it currently holds over Atlantic basin LNG prices — and even more so if they opted to regasify some of these imports for domestic sale. Many of the US’ export facilities started life as import terminals, and retain the ability to supply the US grid.

The most likely sources of LNG for such a trade are Trinidad and Tobago and west Africa.

Thanks to its proximity, Trinidad could secure a better netback delivering LNG to the US Gulf coast than to Europe. And with European June prices at a 40¢/mn Btu discount to 115pc of Henry Hub, US operators could afford to outbid European buyers for cargoes from west Africa and still save money relative to the cost of gas from Henry Hub, despite the freight cost being 7¢/mn Btu higher. 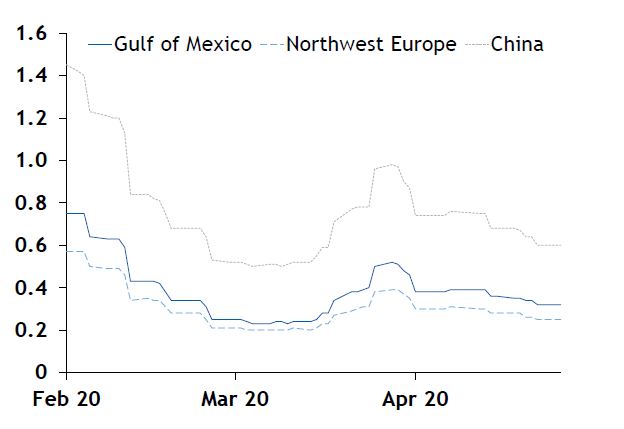 LNG market at turning point in 2020

An oversupplied LNG market could intertwine with political challenges to shape the future of the industry next year.