Nordic prompt power prices have fallen to record lows this summer, delivering significantly below those seen over the past 14 years. But when will prices “normalise”? It’s unlikely to be by this winter.

The Nordic Elspot system-wide day-ahead base load price has settled at €6.55/MWh on average so far this month, well below the August spot delivery range of €13.05-66.50/MWh for the 2006-19 period, with a similar trend seen in each month this year. 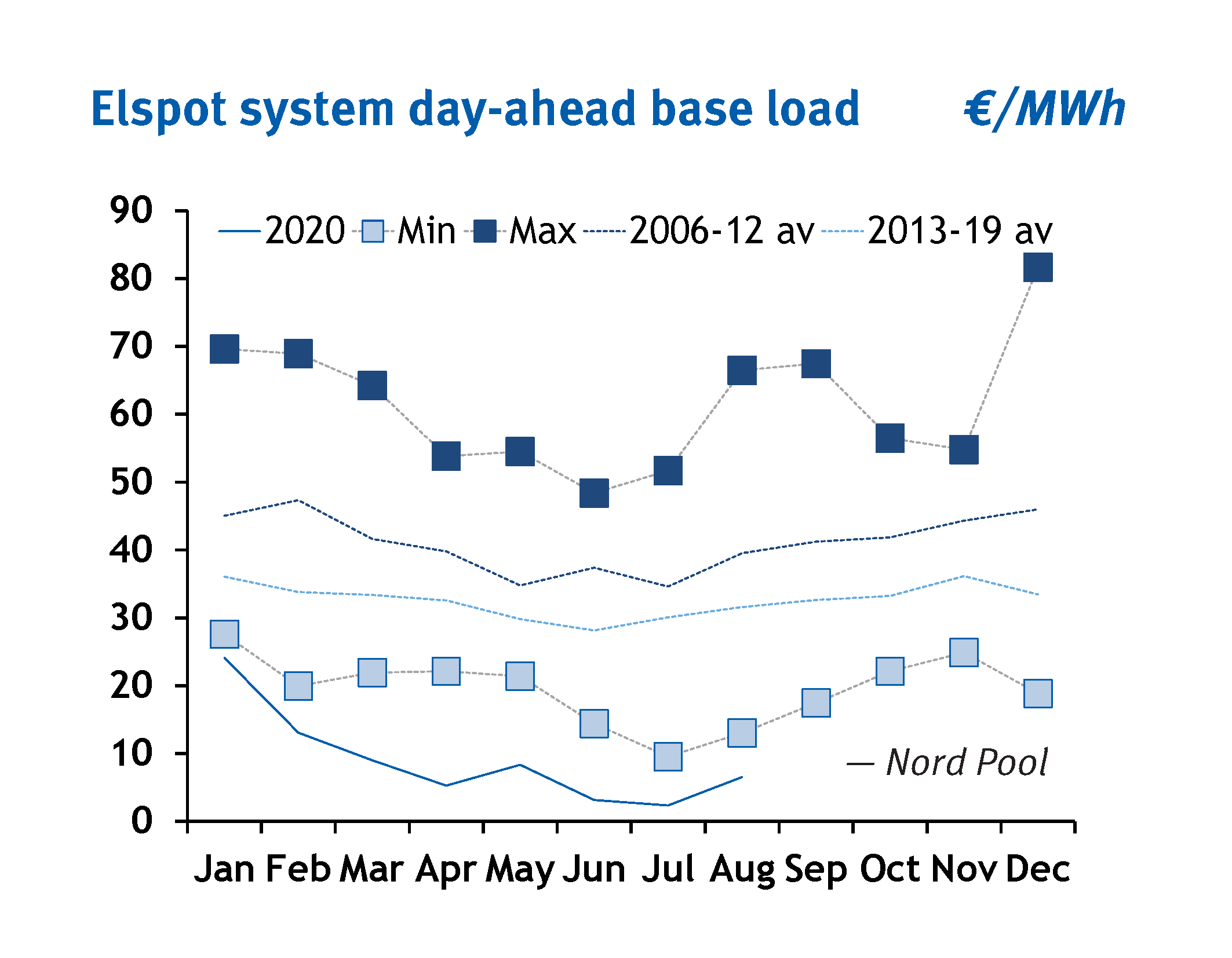 Norway — the country with the highest hydro reserves in the region — has been the primary culprit for weak system prices, with Norwegian hourly power prices settling in negative territory for the first time ever in early July. The Norwegian water resources regulator issued several higher-than-usual spring flood-risk warnings across the country and it declared 2020 the snowiest year in 20 years.

This has meant Norway has remained the principal candidate for intra-regional power exports to premium price zones, mainly Denmark, Sweden and the Netherlands, with Norwegian monthly net exports on track to be their highest for at least two years.

And the water is unlikely to run out any time soon.

In Sweden, the weak power price environment has forced the transmission system operator to implement several measures this summer to support grid stability, including bilateral agreements with nuclear, gas and oil-fired plants to support voltage stability, and it has enforced power interconnector limitations between domestic price zones in the central and southern regions to balance the system.

So far these measures seem to be sufficient, without causing any significant changes to the country’s net export position compared with previous years. But it remains to be seen how Swedish import dependence will adjust in the peak winter period, particularly as the country’s winter supply margins this year are likely to be lower as the share of variable renewable capacity within the domestic generation mix rises and base-load nuclear capacity’s share falls.

Hydropower stocks in Norway, Sweden and Finland were around 89.1pc of capacity by the end of the second week in August, with levels holding well above the long-term average over the past two months, unlike the trend seen for at least the past two years. 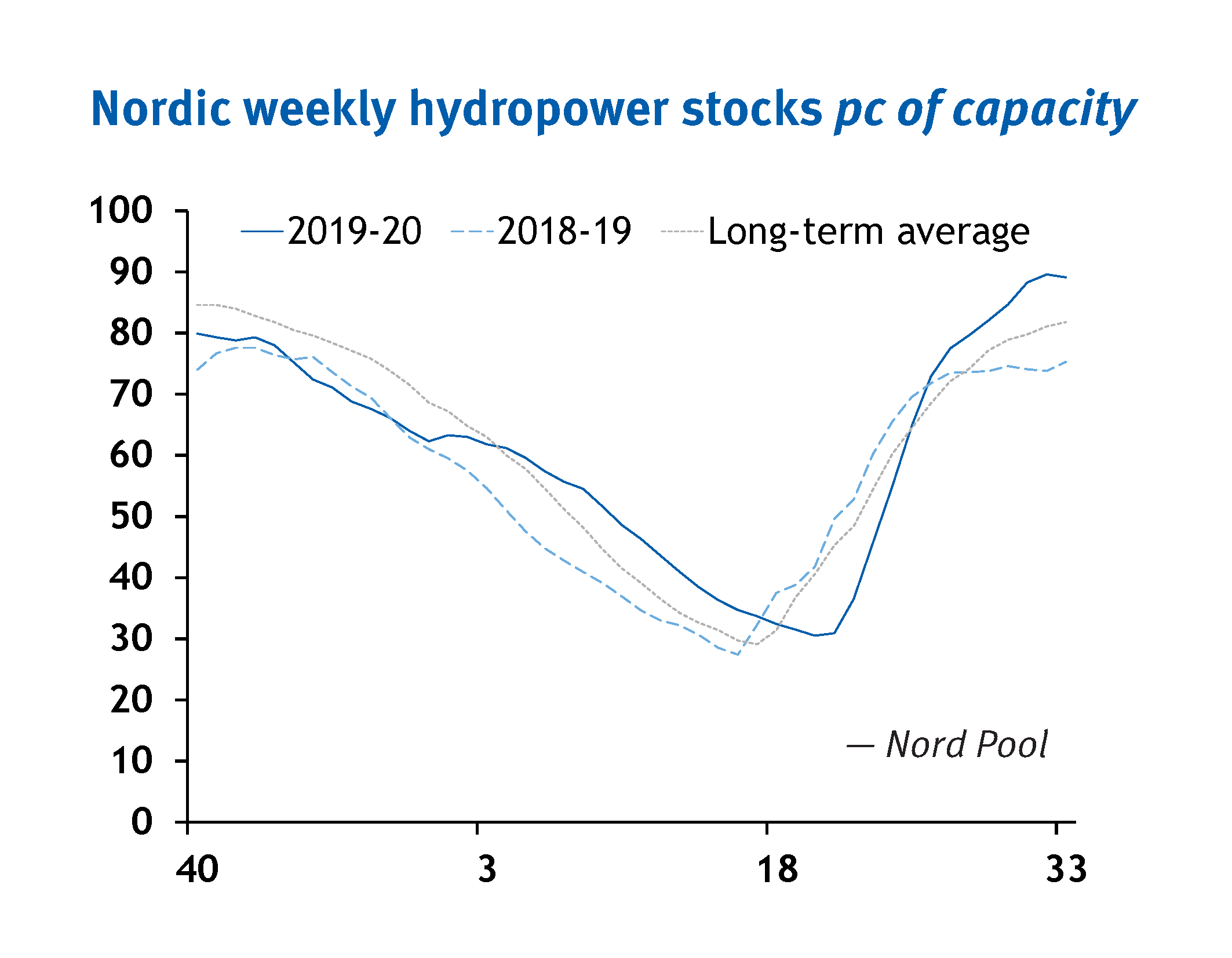 How fast the hydro surplus is eroded ahead of the region’s coldest winter months will be crucial to price developments ahead, but for now, prevailing forward prices point to the status quo.

So far this summer, the Nasdaq Nordic fourth-quarter 2020 and first-quarter 2021 base-load futures prices have held consistently below long-term delivered spot levels in previous winter periods — at around the €39/MWh mark — with levels closing around €19.45/MWh and €25.85/MWh, respectively, this month. This is around €18.50/MWh and €15.30/MWh, respectively, below the average German over-the-counter equivalent contract — suggesting the Nordic region will continue to export to its central and western European neighbours. 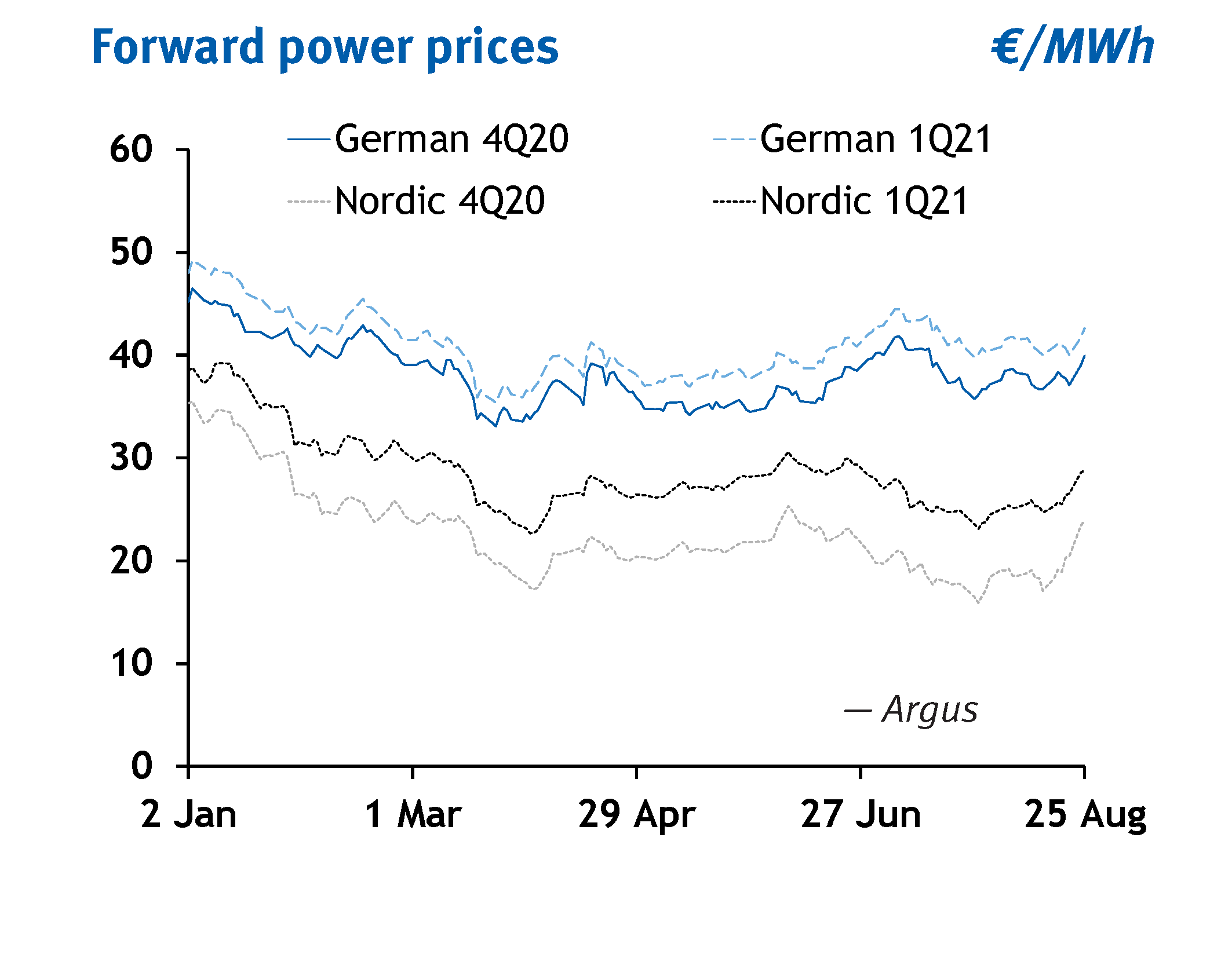 Several new structural changes in the Nordic power market will also come into play over the upcoming months — including new power interconnectors to Germany from Denmark and Norway — the 400MW Kriegers Flak and 1.4GW Nordlink — the closure of Sweden’s 880MW Ringhals 1 nuclear unit later this year, and let’s not forget the long-awaited start of Finland’s new Olkiluoto 3 nuclear unit, which had been expected to start fuel loading in June, before this was pushed back to an undetermined date owing to measures taken to combat Covid-19.

Nordic fourth-quarter power demand averaged 48.3GW over 2018-19, with the level rising to 54.1GW in the first quarter over the same timeframe, as cold spells — defined by the Finnish grid operator as temperatures ranging from minus 20°C to minus 25°C in the southern region and minus 30°C in the rest of country — typically become more likely.

Concerns over a potential supply-demand imbalance in France in the fourth quarter have pushed the physically delivered contract to an unusual premium to the financially settled derivative.