Welcome back to our monthly blog: The US Crude Export Chronicles, by Senior Reporter Eunice Bridges (@eunicebridges12) and Associate Editor Amanda Hilow (@HilowMidpoint). Come back every month for Argus’ take on US crude exports and how they are faring in the shaky Covid-19 recovery.

A lot of uncertainty will still plague the market at the dawn of 2021, with a new strain of Covid-19 causing fresh travel restrictions faster than governments can distribute vaccines. In addition, the incoming administration of US president-elect Joe Biden signals major changes in energy policy, potentially impacting export markets.

But one thing is certain – Asia-Pacific demand for North American crude remains strong as refiners flock to alternative supplies to Mideast Gulf crude amid ongoing Opec+ production cuts, while a widening spread between US oil benchmark WTI and the international marker Ice Brent supports the US export arbitrage.

State-controlled Indian refiners this month expanded their import portfolio to include more US grades, with IOC now including West Texas Light (WTL) as an eligible grade in their weekly import tenders and Hindustan Petroleum (HPCL) issuing a unique tender that sought Mars for its Vizag refinery in January and February.

There’s also been an upswing in deliveries of heavy sour Canadian grades like Cold Lake and Western Canadian Select (WCS) to the US Gulf coast for re-export purposes to Indian and Chinese refiners seeking high-bitumen yields. The trend has pushed the price of WCS in the Houston market to an average $11.50/bl so far in the January US trade month, reflecting a 10-month high with room for further growth. 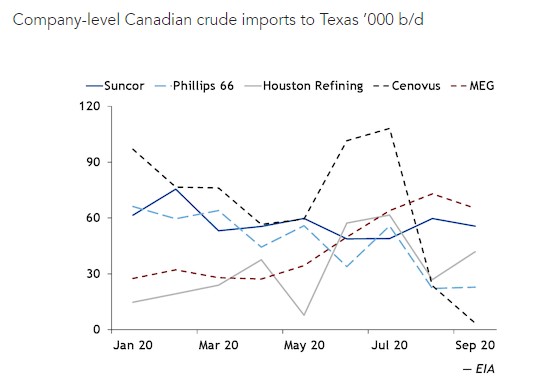 US crude exports, which had been resilient for months in the face of hurricanes and Covid-19, showed some cracks in October.

Domestic crude exports fell by about 10pc to 2.91mn b/d, dropping below the 3mn b/d mark for the first time since June, according to the latest US Census Bureau trade data. China reigned as the top buyer for the sixth consecutive month, taking 679,000 b/d. India was also in the top five with about 245,000 b/d — with more than one-fourth of that on the heavy side.

Corpus Christi in south Texas continued to be the dominant port for crude exports with about 50pc of the total in October.

Speaking of Corpus Christi, we had some news on a major export project. The Port of Corpus Christi Authority approved a lease agreement and a pipeline easement related to the Bluewater plan, a Phillips 66-Trafigura joint venture to build an offshore VLCC port.

Bluewater includes two single-point mooring buoys about 21 nautical miles from the entrance of the Corpus Christi Ship Channel. The project is designed to fully load 16 VLCCs a month.

If you recall, some 10 companies were eyeing possible offshore oil ports when US production was booming near 13mn b/d before the Covid-19 pandemic. In the aftermath of the demand hit and the economic toll of the virus, four offshore VLCC projects remain on the books. Click here for an Argus update on the narrowing race.

Meanwhile, the DAPL drama continues, as in Energy Transfer’s 570,000 b/d Dakota Access pipeline. US district court judge James Boasberg is weighing a motion to halt the flow of oil on DAPL after the court earlier this year vacated a key easement that allows the pipeline to cross under the Missouri river and ordered a new environmental review.

DAPL is the largest export pipeline out of the Bakken shale and connects to another large Energy Transfer line to the US Gulf coast.

Many moving parts are in play as we start 2021.

A DAPL shut down could shake up the export picture early next year. So could any steps by the new Biden administration to mend tensions with China or tweak the interim deal signed early this year.

More US medium sours are expected to arrive in China in the first quarter of 2021 as an extended shutdown of the Cameron Highway Oil Pipeline System (CHOPS) rerouted crude from Texas to Louisiana, inundating refiners with excess supplies of Bonito Sour and Poseidon. Surplus Bonito deliveries have spurred producers to offer the traditionally illiquid grade in the international market near-term, with one 2mn bl cargo recently heard offered on a delivered basis to China for March arrival.

CHOPS is expected to resume services on 19 January after a bypass is built around the Garden Banks 72 platform offshore, which may reduce Louisiana sour crude availability in the export market and possibly support regional prices.

We’ll be watching how the market reacts to the new US administration and, of course, the latest round of Covid-19 outbreaks. In the meantime, we wish you smooth sailing in these choppy waters — and a happier new year.