Waterborne opportunities and medium sour storage plays were the result. The date for when CHOPS returns online remains uncertain.

In this week's episode of The Crude Report, Alex Endress, US Gulf coast crude markets reporter for Argus, is joined by Amanda Smith, Argus deputy editor, who also covers the US pipeline network.

Alex Endress: Hello, and welcome to the Argus Crude Report, a podcast series on global crude oil markets. I'm Alex Endress for Argus Media, and I cover US Gulf coast crude markets for Argus. And joining me is Amanda Smith, our deputy editor, who also covers the US pipeline network. 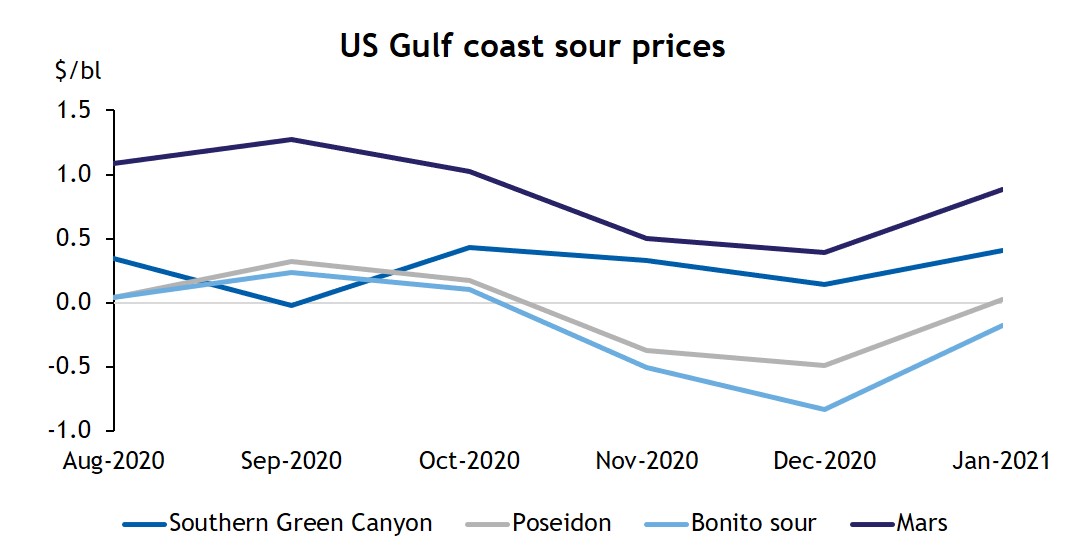 Today, we're going to chat about how US Gulf coast sour prices have been affected by prolonged disruption in the offshore transportation network. The Cameron Highway Oil Pipeline System – or CHOPS – has been offline since late August, and that's because Hurricane Laura's damage on a platform brought down CHOPS flows. Medium sour crude that typically travels on CHOPS to be sold as Southern Green Canyon – or SGC – has been rerouted to Louisiana. Those barrels are now flowing through the Poseidon pipeline system for delivery into the Poseidon stream or into Bonito, and as a result, we've seen increased waterborne opportunities and medium sour storage plays in Louisiana, but the operational return for CHOPS remains unclear. Amanda, you've got the latest. So, what have you been hearing regarding a return to normal operations for CHOPS?

Amanda Smith: Hi, Alex, for sure. So, like as you mentioned, the issue is actually damaged to a platform, the Garden Banks 72 platform, which is on the CHOPS pipeline route. Now, Genesis, who is the owner of CHOPS, has said that it used to receive and launch pigs to maintain certain segments of the pipeline system. But they've said that they can do that from another platform and that they've now decided that a pipeline bypass around the platform is actually going to be the fastest way to get CHOPS back in service. They sent in a notice to shippers in November that they expect to have that completed by the end of the year assuming no large permitting delays. In the meantime, crude that typically flows into CHOPS continues to be rerouted into the Genesis-operated Poseidon system, as you mentioned, it flows crude to the Louisiana coast. Genesis let shippers know that they can expect an update on the CHOPS situation on December 9th.

Alex: So, we know that the Bureau of Safety and Environmental Enforcement – or BSEE – also plays a role in approving an operational change. And what have you been hearing on that front?

Amanda: So, Genesis let shippers know that they had provided BSEE with a structural analysis report. According to Genesis, the report detailed the areas of the Garden Banks 72 platform that may or may not require a repair subject to BSEE's final determination. But they were also applying for a bypass to route crude around the platform. And on a call to Argus, Genesis said that that bypass would be able to move the same amount of oil as CHOPS could prior to Hurricane Laura. They did say that they had not made a decision, whether they will intend to repair the platform or if the bypass will be permanent, then the results from their applications to BSEE were not aware of those yet. But Genesis did say that if in the future they decide to significantly expand the capacity of CHOPS, that they would need to add pumps along the line. They said that they believed they could reinforce the platform to handle more pumping capability or that they also have other options of where to do that. So, again, that's if they decide to further increase the CHOPS capacity. So, all that being said, the latest information as of December 7th is that Genesis is anticipating the bypass to be completed by the end of the year and that at that point, CHOPS would be able to resume operations.

Alex: With such uncertainty around CHOPS and any future deliveries in Texas, you’d think that Texas-delivered Southern Green Canyon or SGC barrels that travel on CHOPS to the Texas coast would be paused for the time being, but we did see a trade for January delivery in the spot market last week.

Amanda: That's right. And now, we in December, we saw very, very little spot trade for December delivery, but we saw a trade for January delivery last week, and we've seen bids and offers with more frequency in the January trade month. So, these seem to suggest there's more confidence that the CHOPS system will return to service in January. And while we know the SGC trades in the Netherland and Texas City markets off of CHOPS can also trade with tank delivery, that said, we do know that the recent trade that we've seen and the discussion we've seen are expected to be CHOPS barrels. Also, if SGC trades for a given delivery month, like the January trade, it has the potential to be paid back at a later month if there's insufficient flow from CHOPS.

And so, with that context, we've seen SGC prices rising against the Cushing benchmark price. The January SGC trade month average is about 40 cents over the Cushing benchmark as of the 4th of December. That's about 25¢/bl higher than it was for December trade month average. And on the second, we saw that SGC trade at a 65¢/bl premium to the Cushing benchmark. So, while we've seen higher SGC prices in Texas, there's also been a noticeable effect in Louisiana with the CHOPS flows diverted into the Poseidon system. Genesis, they've been rerouting this crude that typically flows into CHOPS to be sold as SGC over to the Louisiana coast.

And as you can imagine, we've seen Louisiana medium sour prices pressured against SGC due to the added volumes as well as the effect on the quality. If we look at the December trade month that ended on November 25th, SGC averaged a 97¢/bl premium to Bonito and a 63¢/bl premium to Poseidon. And back during the September trade month, which ended on the 25th of August right before Hurricane Laura made landfall, SGC averaged a 26¢/bl discount to Bonito and a 34¢/bl discount to Poseidon. 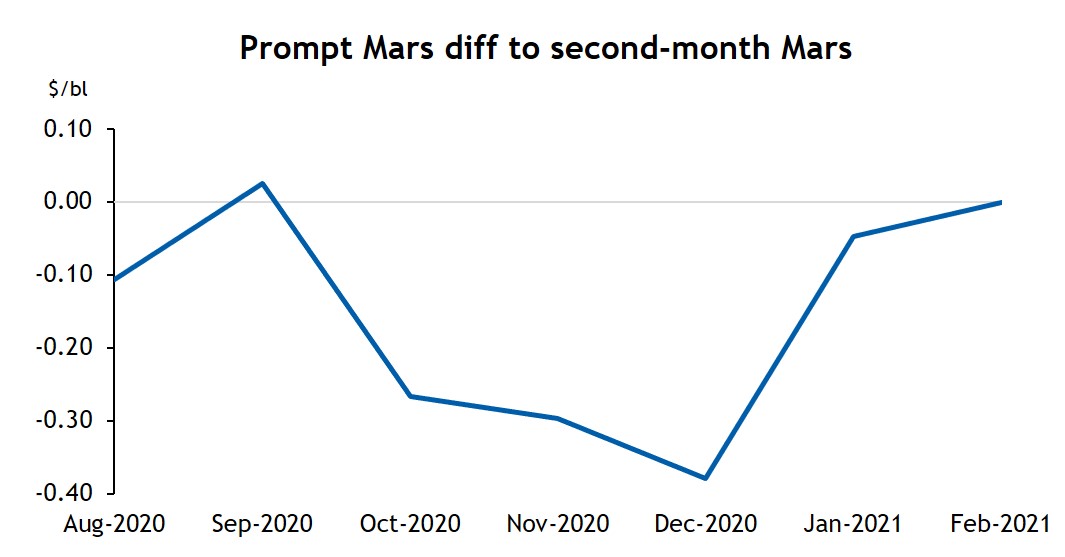 Amanda: All right. And so, with that bit of contango in the market, there were some storage opportunities, right?

Alex: Yeah. And in fact, the Louisiana Offshore Oil Port or LOOP sold 99.7% of the 8.9mn bls of storage offered for sale at its November online auction. And you know, of course, crude grades that can be stored in the LOOP sour cavern space include Mars, Poseidon, Iraqi Basrah, Arab Medium, and Kuwaiti. Of course, once crude is delivered from the LOOP's sour cavern space, it's traded as LOOP sour crude.

And though LOOP often offers storage further out even into 2022, in this case, the highest clearing price at 11¢/bl was for January 2021 storage. And before that, LOOP sold 94% of offered space during the prior auction in October.

However, in the most recent auction in December, we did see interest dip as LOOP sold 5.1mn bls of the 7.8mn bls in offered storage. And one reason could be that we've seen waterborne activity materialize and recent international interest in these US hours. It's possible that the pressure from the additional CHOPS barrels heading to Louisiana maybe helping the grades become more competitive. For example, India-state controlled company HPCL recently issued a unique tender to buy Mars crude for delivery to the country's terminal on the Eastern coast of India. And Mars has also been shortlisted in two tenders by India's largest state-controlled refiner, IOC, and it's been taken by Sinopec's refinery in China. But that said, Amanda, you know, with your experience covering SGC, how do you expect 2021 to unfold in terms of that medium sour availability there on the Texas coast?

Amanda: That's a great question. And, you know, I think as long as CHOPS remains down, we're going to see these Louisiana medium sours pressured and the medium sour crude in Texas price supported now with all other things being the same. But if Genesis is able to create a workaround like they're talking about, then we would probably expect SGC prices to move back in line with the neighboring sours in Louisiana and to return to more like they were before.

Alex: Well, it has been a really interesting story to cover over these past few months, Amanda. I really appreciate your time. Thanks for chatting. And it does sound like the market is anxiously awaiting an update.

Amanda: Absolutely. I'm happy to discuss. And yes, it seems like all eyes are on Genesis right now.

Alex: And listeners, our eyes are on you. So, if you're in need of more in-depth, daily coverage of US crude oil markets, consider subscribing to Argus Americas Crude. You can find more information on this service at www.argusmedia.com. Thanks for tuning in, and we look forward to you joining us on the next episode of The Crude Report.

In this episode of The Crude Report, we look at oil markets through the prism of China, where life seems to generally be back to normal, as even their energy consumption has come roaring back.

Opec+ ministers will meet w/c 30 November to discuss next steps for their production agreement, the decisions of which will obviously have impacts on global crude oil trade flows.