The Permian basin, a key driver of the US becoming one of the world's top oil producers, will come under sharper focus as investors gauge the region's ability to shoulder output growth in the coming years as other geologies falter.

US government agency the EIA's Short-Term Energy Outlook, making its first 2021 forecast, predicts a sharp slowdown in US production growth as independent operators face unrelenting investor pressure to cap spending and focus on retiring debt and improving shareholder returns. The onshore output rise from the lower 48 states will be 400,000 b/d in 2021, versus an increase of almost 1mn b/d this year, the EIA says. Lower 48 production in 2019 averaged 9.9mn b/d, against 8.8mn b/d a year earlier. Of the growth expected this year, 800,000 b/d will come from the Permian, which straddles Texas and New Mexico. The exponential shale industry expansion has pushed US crude output to successive records, with the EIA pegging 2021 expectations at 13.7mn b/d, against 12.2mn b/d in 2019.

But the agency's Drilling Productivity Report, which breaks down output by basins, reveals slowing production growth trends. An expected rise in US shale oil output of 30,000 b/d in January is down from growth of 134,000 b/d a year earlier, while forecast Permian growth of 48,000 b/d this month is down from 73,000 b/d in January 2019. Growth has stalled in the Bakken region of North Dakota and Montana, and production has started to fall in south Texas' Eagle Ford and Oklahoma's Anadarko basins. 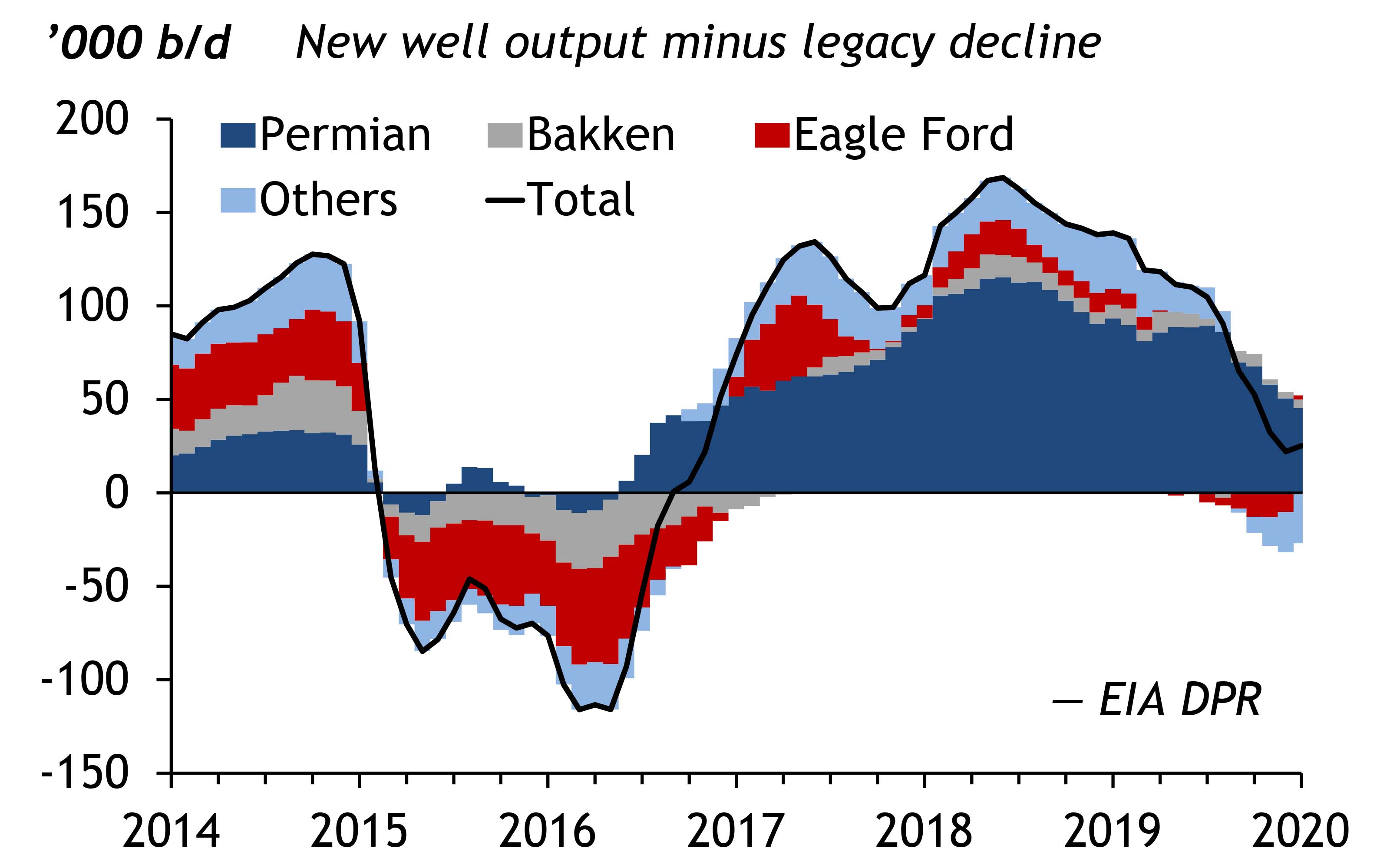 As producers pull back on output plans to keep their spending within cash flow, the US onshore drilling rig count has fallen to its lowest since March 2017 at 772, oil service firm Baker Hughes says (see chart). The Permian accounts for the largest share of this at 405, down by 79 from a year earlier.

A host of factors — basin size, a rise in base decline rates, and access to pipelines and other infrastructure — are contributing to the divergence between the Permian and other basins. Some of the dominant operators in these other basins are flagging the challenges. US independent ConocoPhillips, a key producer in the Eagle Ford, has earmarked $1.9bn/yr of spending for the region, representing the biggest single share of its $4.2bn/yr US onshore budget, laid out under a 10-year plan in November. But

it sees its output from the basin plateauing by 2023, with the Permian — where it is allocating about $1.4bn/yr — steadily growing.

Similarly, fellow US independent Hess, a large Bakken producer, is targeting 200,000 b/d of oil equivalent (boe/d) in the region by the end of this year. But it will then hold production flat, partly because the cost of adding infrastructure to transport a further rise in output would damage the economics of its operations. 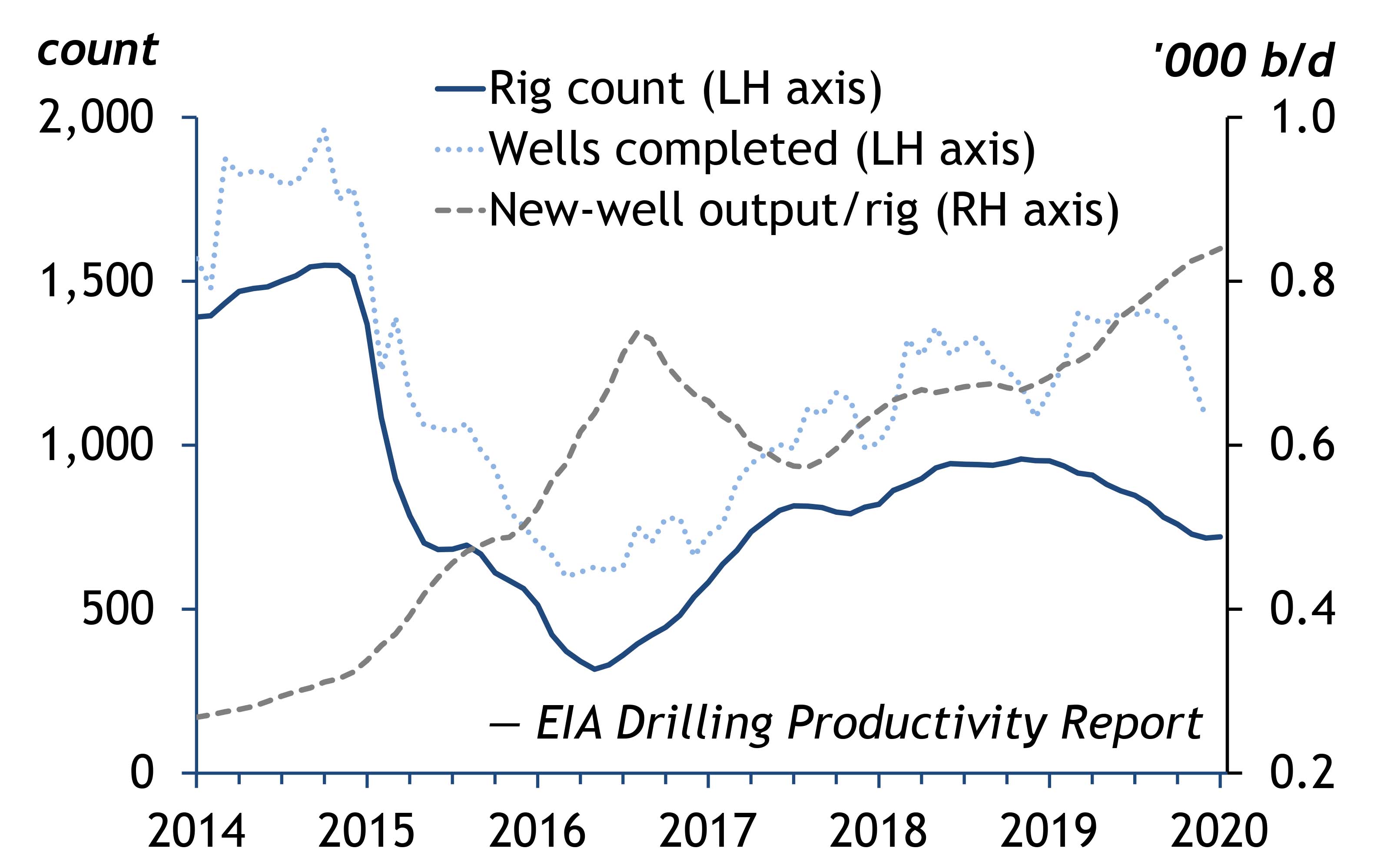 The continued uptick in Permian output despite declining drilling activity reflects the geology of the basin, along with technological and operational improvements, the EIA says. Majors including ExxonMobil and Chevron, and large independents such as Occidental, are enhancing their focus on the basin as pipelines and other infrastructure expand to move rising Permian supply to US Gulf coast refineries and ports. This development could result in output from New Mexico surpassing 1mn b/d this year, with it potentially overtaking the Bakken as the second-biggest producer in the US in 3-4 years, consultancy Rystad says.

Even so, challenges remain for Permian production growth. Limited gas offtake capacity may cap operations as associated gas output rises with oil. And the decline rate at Permian wells is accelerating, to 65-85pc in their first year, as companies drill in newer areas, consultancy IHS Markit says. That means firms will have to drill more wells just to sustain output, resulting in an increase in costs.