Rising production and growing capacity to bring it to market are solidifying WTI's role as a primary and secondary benchmark in the US and beyond.

WTI has had to overcome high hurdles to remain an effective benchmark over the past decade. The primary benchmark market, based around the Nymex futures delivery point at Cushing, lies hundreds of miles inland. Local pipeline and storage infrastructure was unable to deal with steep demand drops and rising inbound flows of Canadian crude that bottled up crude in Cushing from 2009, leaving the WTI price extremely volatile against other seaborne benchmarks.

But the expansion of storage in Cushing, the reversal of major pipelines to move midcontinent crude to the Gulf coast and the lifting of export restrictions in 2015 helped remove the biggest market dislocations.

Infrastructure expansion and the ability to export the US light sweet crude surplus have made the coastal WTI price a key swing market for global oil pricing. US exports regularly top 3mn b/d, almost all of which leaves from terminals around the ports of Houston, Beaumont or Corpus Christi. Growing US crude flows are changing pricing behaviour in European and Asian markets.

Crude markets must meet several requirements to be effective benchmarks. They need enough production to limit participants' ability to corner supply, enough liquidity to generate a reliable price signal, a broad array of buyers and sellers to reduce the market power of any one company, and transparency. WTI is well positioned.

Output in the Permian basin, where WTI originates, will rise to 4.8mn b/d next month, the EIA projects, over a third of US crude output.

The primary WTI futures markets began to overtake Ice's Brent futures contract in mid-2016. Open interest on the CME and Ice WTI contracts peaked at the equivalent of nearly 3.4bn bl in early 2018, before stabilising at around 2.8bn bl for most of last year. But the more dramatic changes have been taking place in the secondary coastal market for WTI. 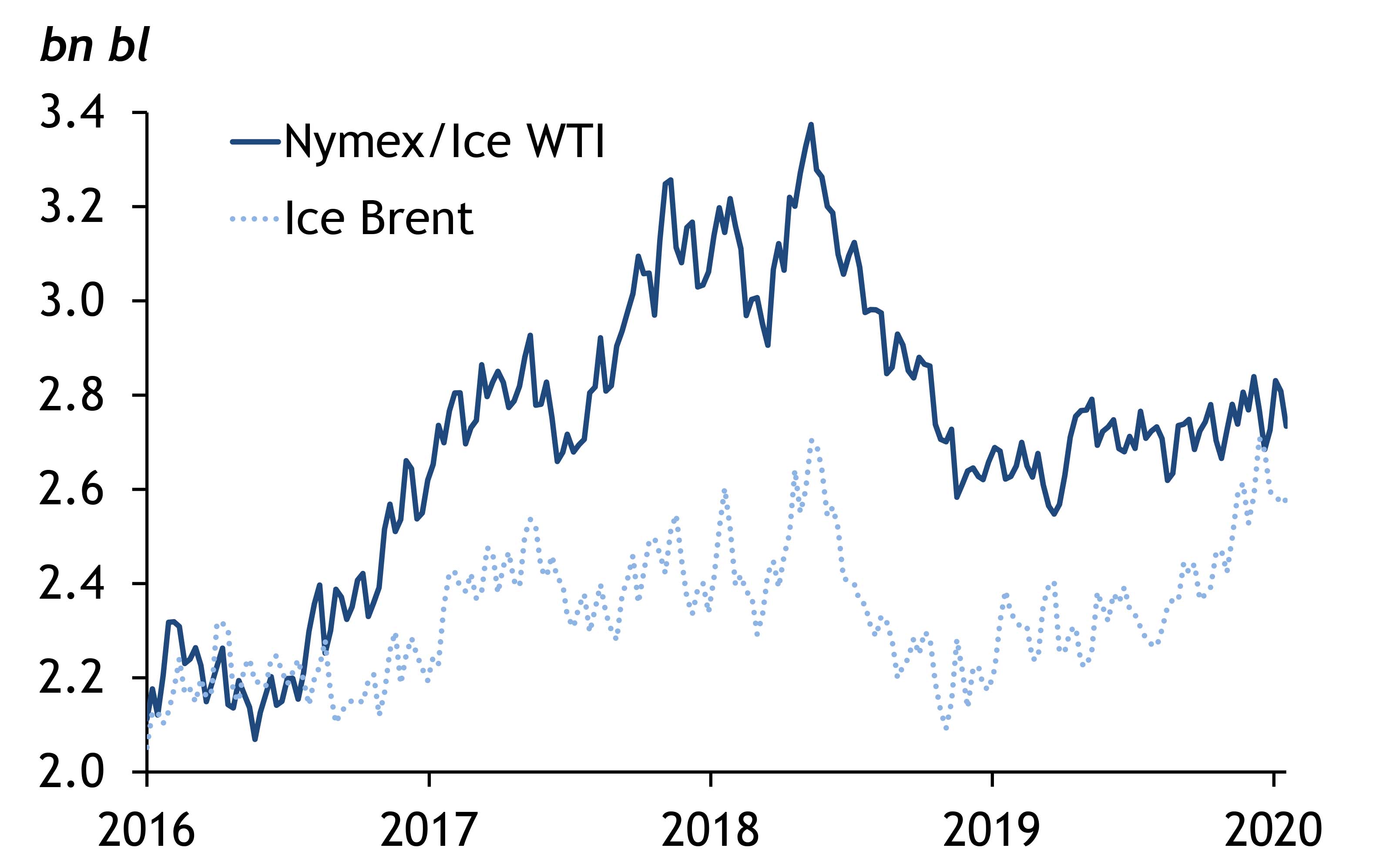 The WTI Houston market has been gradually expanding its benchmark role since exports began to rise. It has taken over from LLS — a blended grade that trades in Louisiana — as the de facto light sweet marker price in coastal refinery economics. Trade volumes attest to the switch. LLS and WTI Houston traded in roughly equal volumes in the spot market in late 2017. But WTI Houston registered a record 710,000 b/d in trade for delivery in February, compared with LLS volumes of just 30,000 b/d. 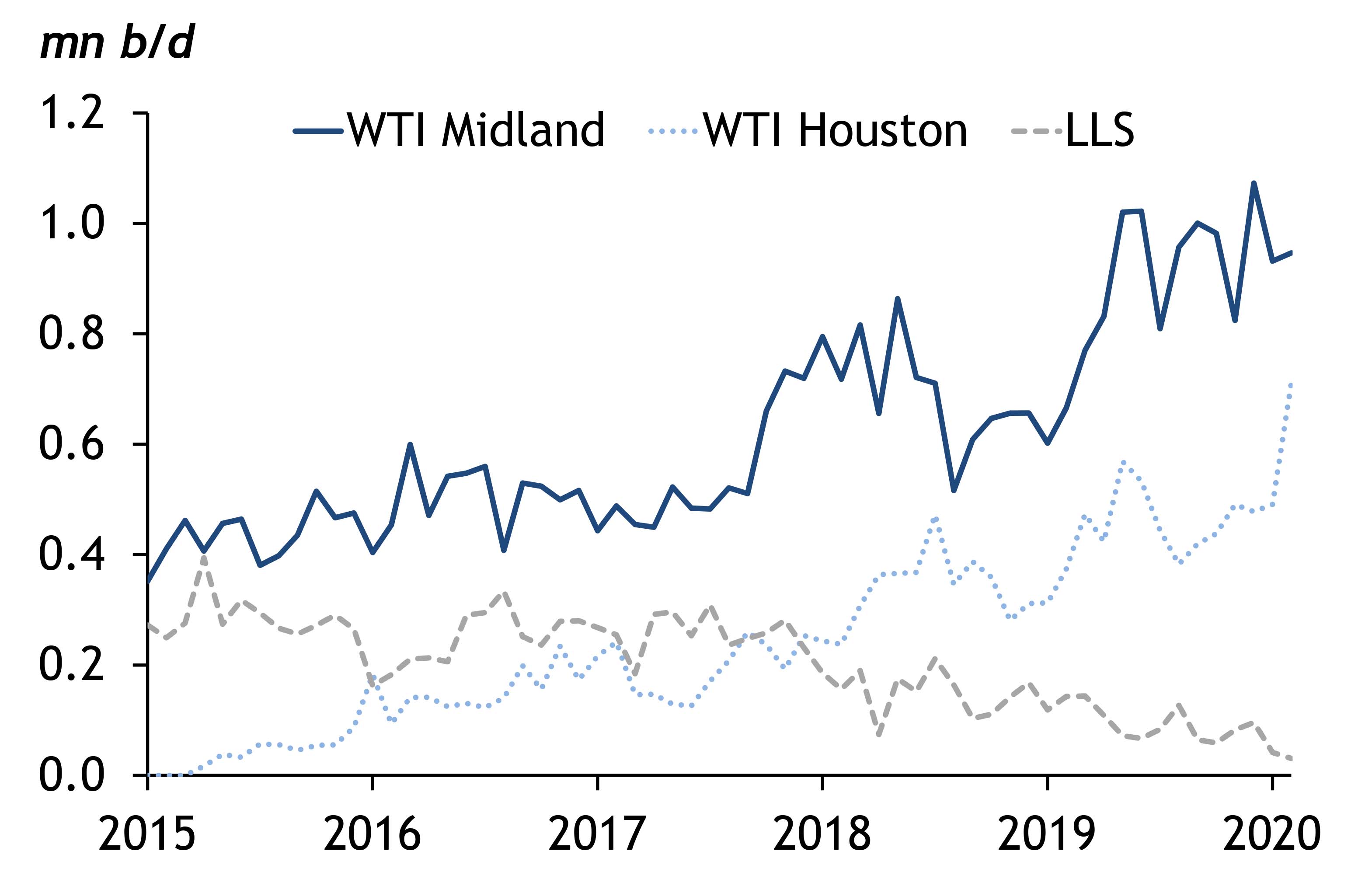 WTI Houston has succeeded in maintaining a diverse base of market participants, even though the shale sector is going through a period of consolidation. Roughly 30 companies are trading the market in recent months.

Mexican Pemex's decision to change the formula it uses to price its heavy sour Maya crude exports last year was a large step to expanding the benchmark use of WTI Houston. The firm now prices

Maya sales to the US Gulf and Atlantic coasts and in the Caribbean against a basket comprising 65pc WTI Houston and 35pc Ice Brent. The shift away from its previous long-standing formula — which included large proportions of high-sulphur fuel oil and light sour WTS assessments — has brought Maya pricing into a more stable range relative to competing heavy sour crudes.

Some Asian refiners are indexing US crude purchases against WTI Houston. Taiwan's CPC and Japan's JX have signed term deals with elements of WTI Houston pricing. But uptake is otherwise slow. For now, Asian refiners, as well as those in Europe, tend to buy US crude through spot purchases linked to more familiar benchmarks, such as Ice Brent or Dubai crude.

Crude oil uniquely ties energy markets with geopolitics and what you hear in the headlines. And with all of the uncertainty around political affairs, it's easy to forget that there are still basic market fundamentals to watch.