An oversupplied LNG market could intertwine with political challenges to shape the future of the industry next year.

Global liquefaction capacity increases have outpaced demand growth in recent months, resulting in a supply glut and a drop in gas prices. The start-up of new LNG export facilities in the coming months is expected to continue to dwarf import capacity increases, exacerbating the build-up in supply relative to demand.

About 26mn t/yr of export capacity began producing last year and a further 23mn t/yr is expected to come on stream in the first half of this year, lifting global liquefaction capacity to 456mn t/yr by mid-2020. Regasification capacity rose by only 11mn t/yr in 2019, with new projects slated to be commissioned this year totalling 22.9mn t/yr. 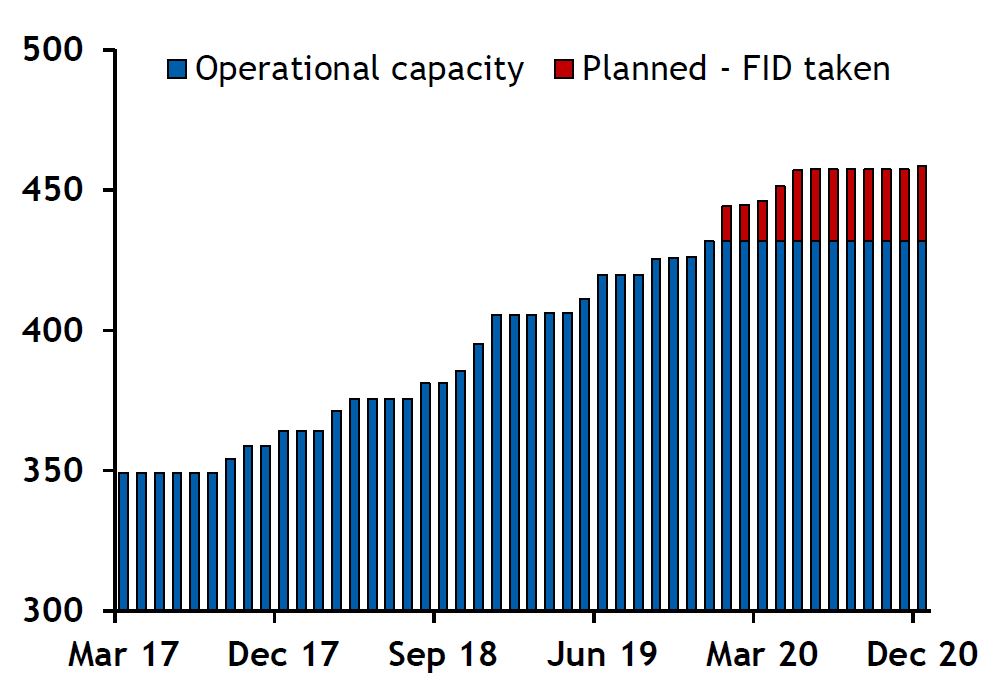 The utilisation rate of import terminals needed to absorb global production, assuming exports are running at full capacity, would need to increase to 57pc this year from 55pc in 2019. But some Asia-Pacific terminals are increasingly underused, with Japanese utilisation dropping to 38pc in January-October from 41pc a year earlier, and the lowest since the Fukushima-Daiichi nuclear disaster in March 2011. Elsewhere, the development of domestic or regional resources could lead to facilities being kept in place to ensure security of supply but being structurally underutilised — as in the cases of Egypt, Jordan, Israel and Mexico.

This may put additional strain on European terminals, which operated at 53pc of capacity in January-November, up from 28pc in 2018 and the five-year average of 25pc. As a result, LNG prices have tracked European gas hubs below oil-linked prices and several coal-to-gas fuel-switching levels — and have been close to the point at which some capacity could be shut in to avoid further losses. 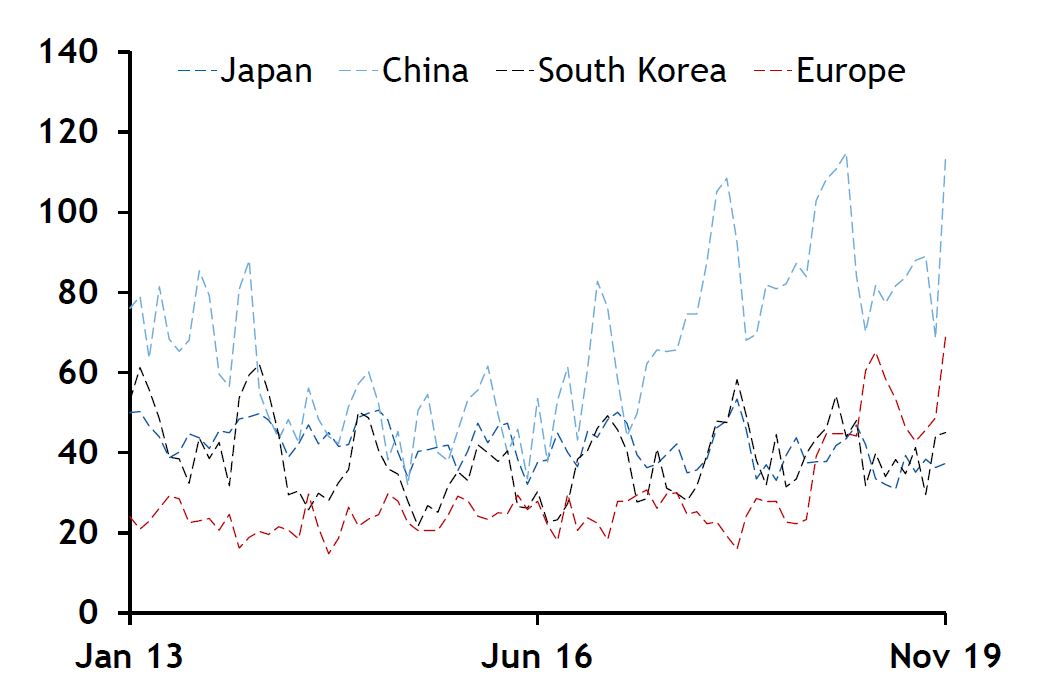 The direction that the LNG market takes this year will depend to some extent on political considerations. Russia and Ukraine finalised a long-awaited new gas transit deal on 30 December, one day before their previous contract expired, which has further pressured European prices and squeezed margins for US exporters. Lower flows through Ukraine have ensured Europe maintained its ability to absorb LNG so far this year, but higher deliveries this summer may further reduce scope for Europe’s balancing act.

On the other hand, the US and China signed a "phase one" trade deal earlier this month, although this included no firm commitment from China to lower retaliatory tariffs that reduced US-China energy trade. And even a rollback of the existing tariffs on LNG may have a limited impact on short-term global trade flows. China's tariff has spurred demand for cargo swaps in Asia-Pacific in recent months, which has reduced the effect of the trade war in terms of the global supply-demand balance.

Should the phase one deal fail to bring about a rollback of tariffs, a prolonged US-China trade war may have a much deeper impact on the LNG industry in the long run, as a recent slowdown in manufacturing activity shows. And having limited access to the fastest growing LNG market in the world makes it more challenging for many US developers to fund their projects.

Rising US supplies indexed to gas prices had already called into question the traditional model of point-to-point, "virtual pipeline" contracts. A prolonged period of lower prices and unprecedented liquidity may hasten an industry transformation already in progress — putting a nail in the coffin of oil indexation — and usher in an era of shorter-term contracts and indexation against global gas prices.

This could further complicate project financing, which is already becoming problematic for an industry whose future is being called into question by environmental concerns. The European Investment Bank has approved new lending guidelines that are likely to hamper investments in gas projects, particularly if private banks start following a similar path.

Political pressure on the fossil fuel industry is expected to intensify in the coming months. The new European Commission has announced an ambitious package of climate policy measures, with a 2030 emissions reduction target to be announced by October. The European Central Bank has also pledged to put the environment at the heart of its future investments.

The gas industry could be the next casualty, unless it proves that it can and should retain a role in a decarbonised economy.