Global gas demand has fallen sharply this year, as public health interventions against the coronavirus have stifled demand to heat offices and power industry. The International Energy Agency (IEA) expects gas demand to fall by as much as 4pc this year — which would be the largest drop since a gas market has existed and would end a decade of uninterrupted growth.

Yet LNG deliveries have continued to rise so far this year. The collapse in global LNG prices in recent months has come about only as a result of global demand growth slowing at the same time as liquefaction capacity recorded its largest increase since late 2018. 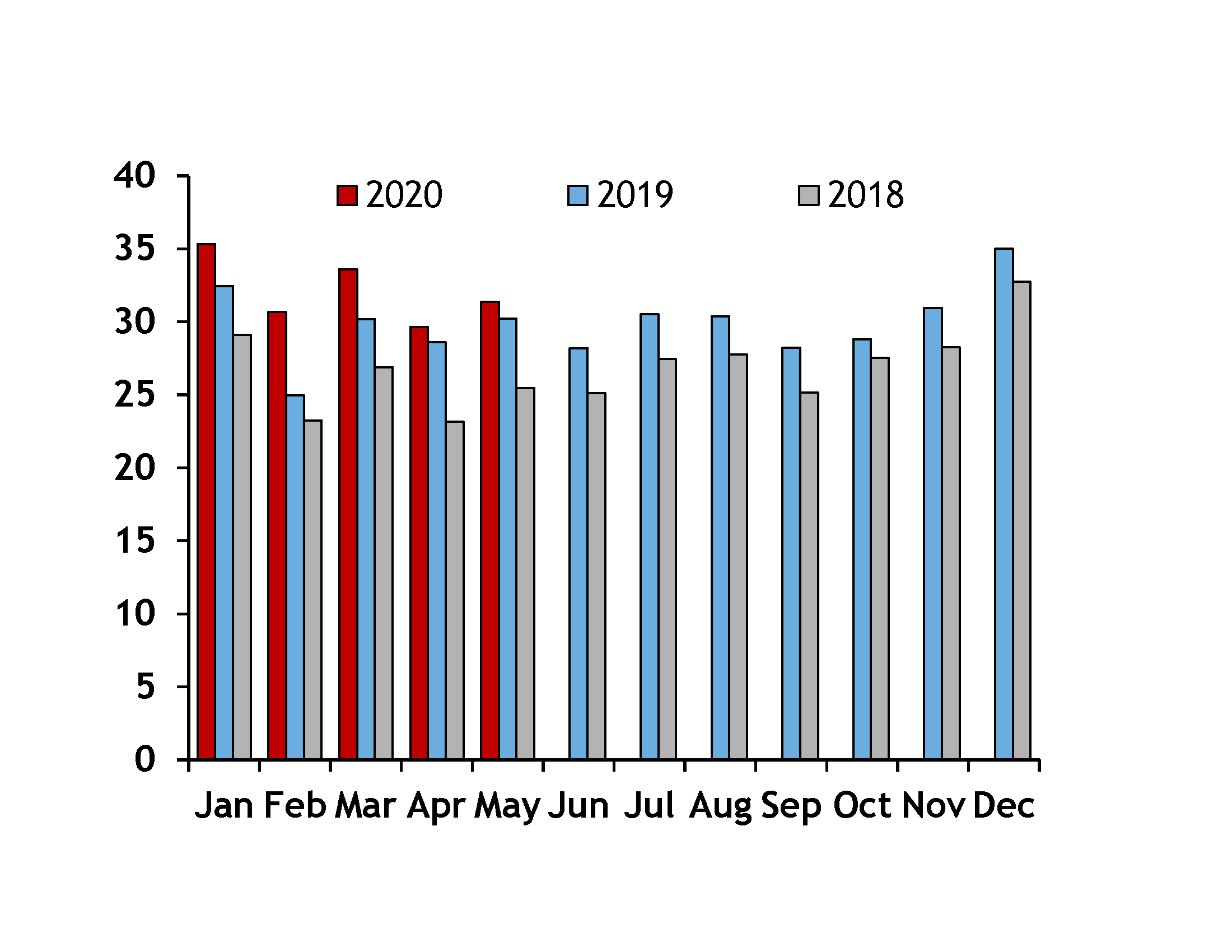 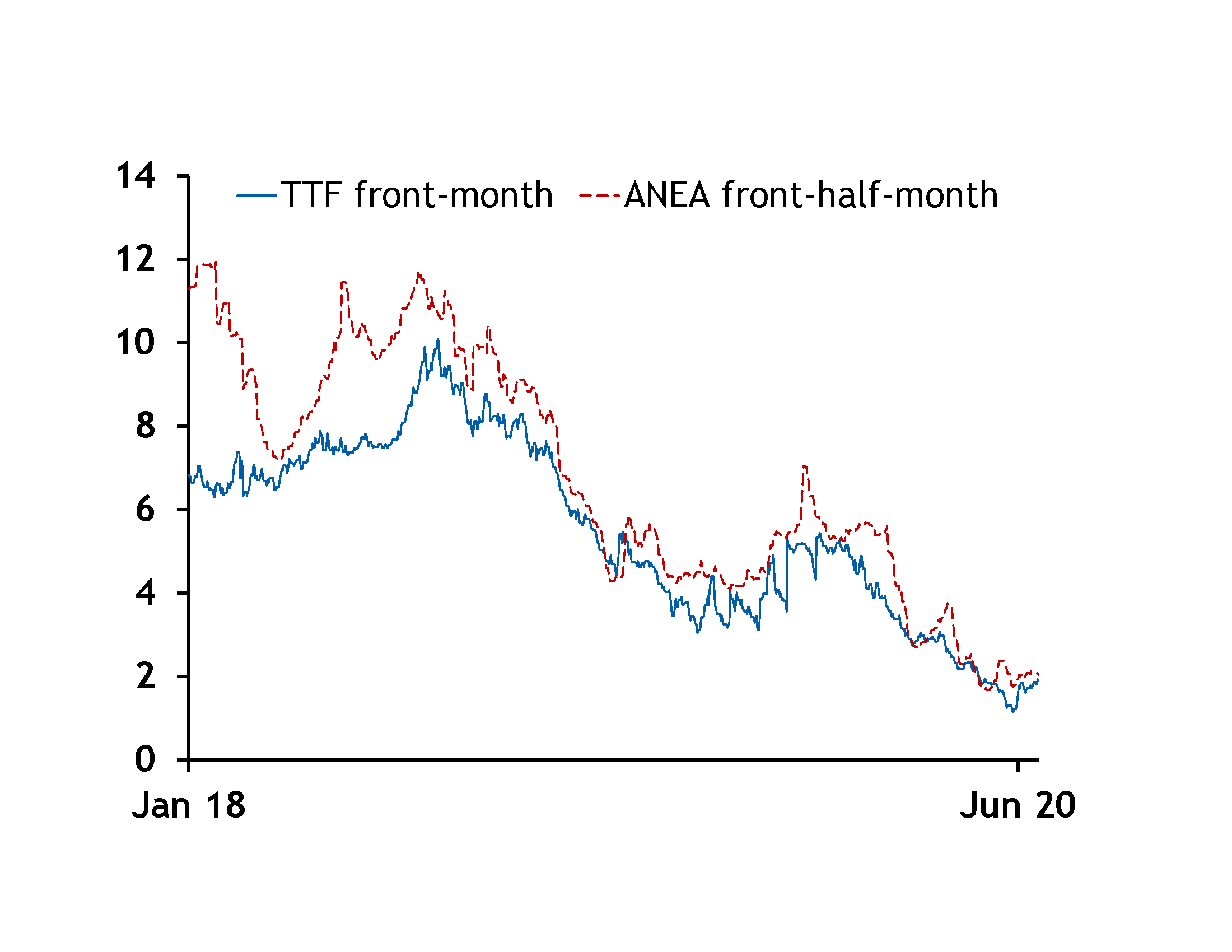 The world’s appetite for LNG has remained so strong because, for many countries, it has been cheaper than pipeline gas — particularly when that pipeline gas has been delivered under long-term contracts priced at an index to oil. As this pricing method remains widely used in pipeline gas contracts, a similar trend has emerged around the world — including Mexico, Brazil, Spain, Turkey, and China.

The switch is nowhere more apparent than in China, where total gas demand has held broadly stable compared with a year earlier, with the increase in LNG deliveries broadly matching the drop in pipeline receipts. 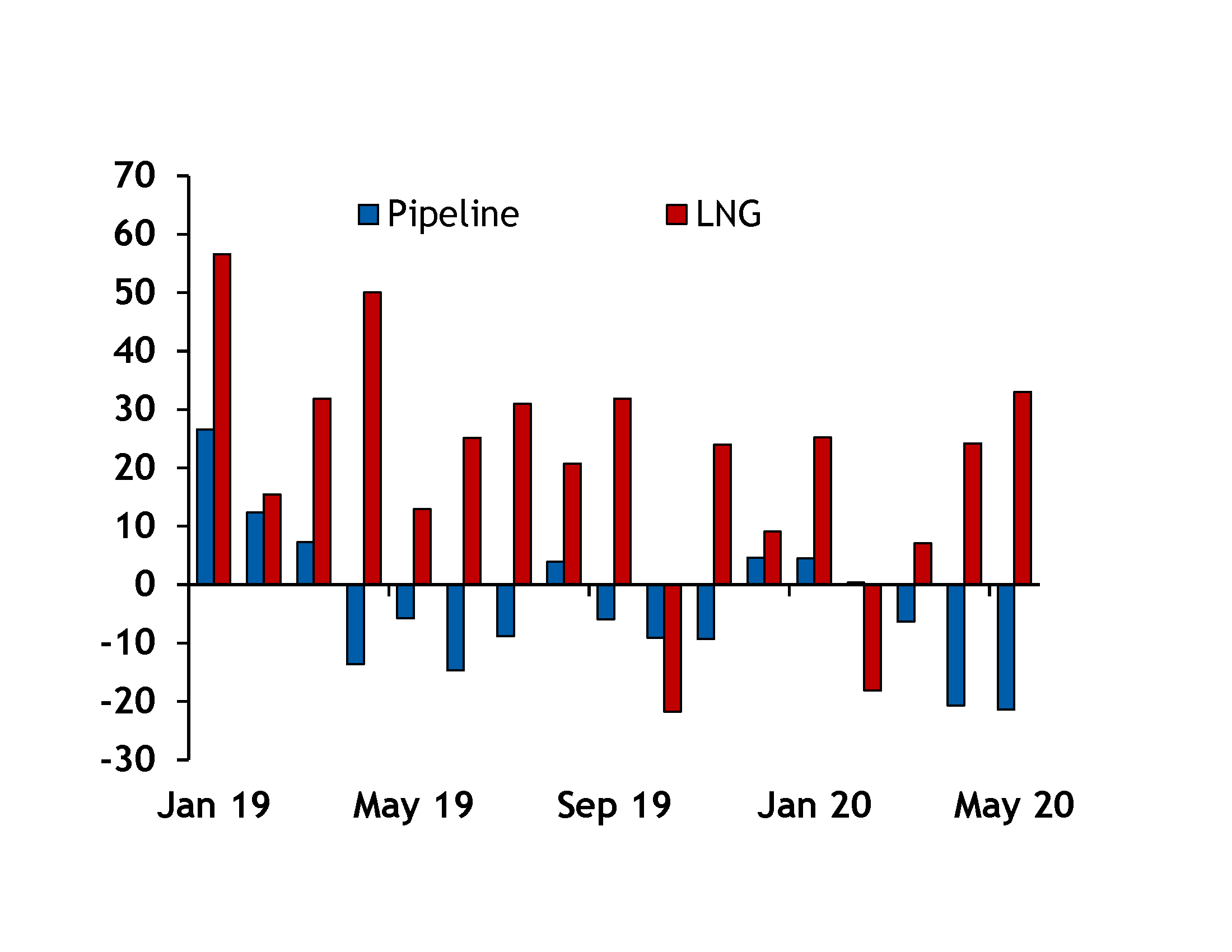 Turkey was also swift to seize the opportunity. Turkish state-run gas firm Botas has been much more active in the LNG spot market this year, seeking a large number of summer cargoes through spot tenders despite the drop in gas demand. In March, as gas flows plummeted, LNG overtook pipeline gas as the country’s largest source of supply for the first time. 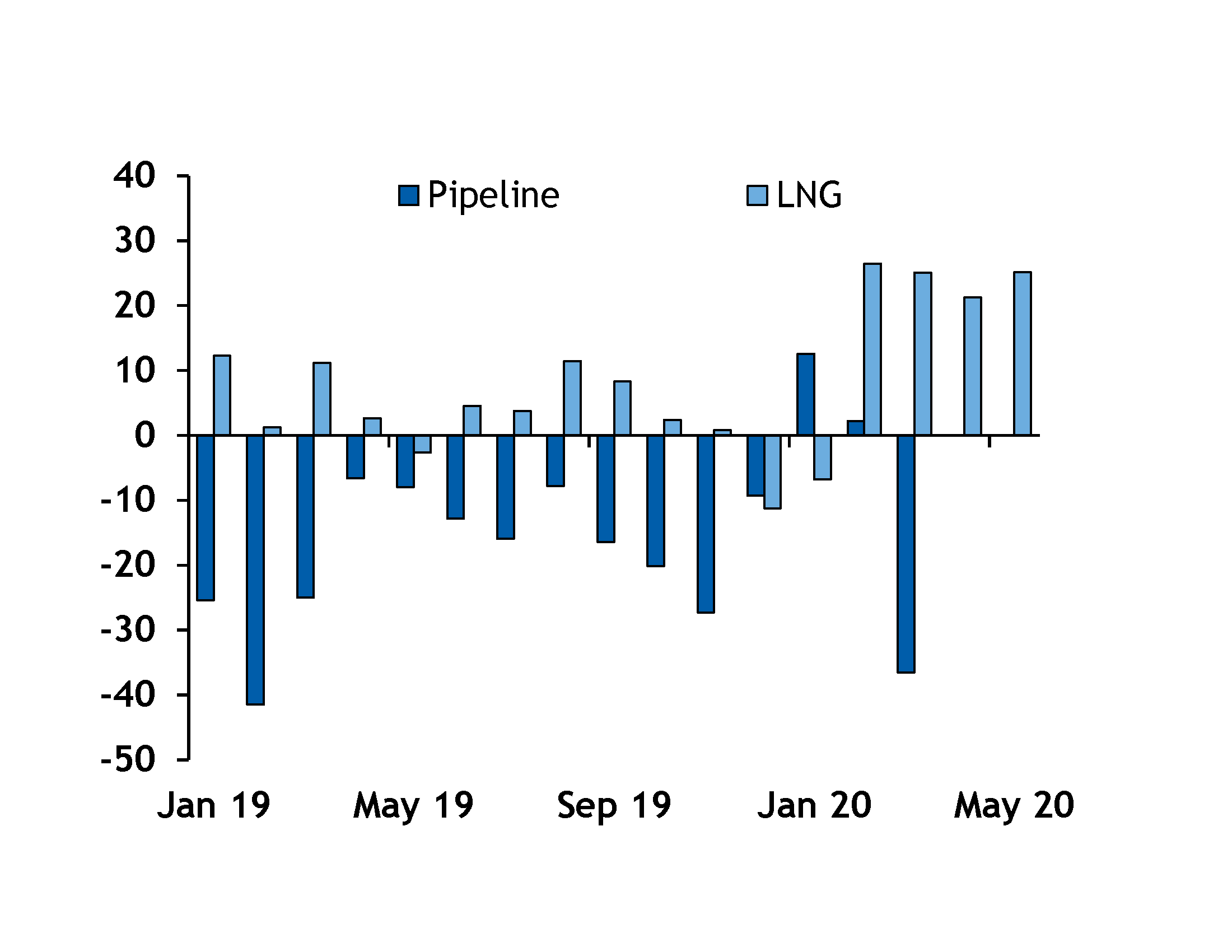 But while buying cheap LNG may have been too good an opportunity to pass by, firms importing pipeline gas under long-term contracts know that they have take-or-pay minimums to reach. Some volumes could be deferred into later years, but that requires specific negotiations often involving the buyer paying for some of the deferred volumes in advance, and at current prices. Brazil’s Petrobras has already secured a reduction in its take-or-pay commitment from Bolivia’s YPFB. But few producers have selling options as limited as YPFB, and may require considerably more convincing before they agree to make concessions.

For most other buyers, ramping up pipeline flows through the remainder of the year — when oil-linked prices will be cheaper, albeit still slightly higher than spot LNG — looks a more attractive option. A rebound in pipeline deliveries in several countries later this year will reduce space for LNG, although when and to what extent may depend on indexation formulas and whether contracts are based on calendar or gas years.

For firms whose pipeline volumes are delivered over an October-September gas year, that ramp-up in offtake may need to begin as soon as next month. In some places, it may already have begun — Algerian pipeline flows to Italy, which remain largely indexed to oil prices, have been rising gradually in recent weeks, after dropping in March to the lowest for any month since October 2014. Similarly, Mexican pipeline deliveries from the US have edged higher so far this month after falling sharply in April-May. 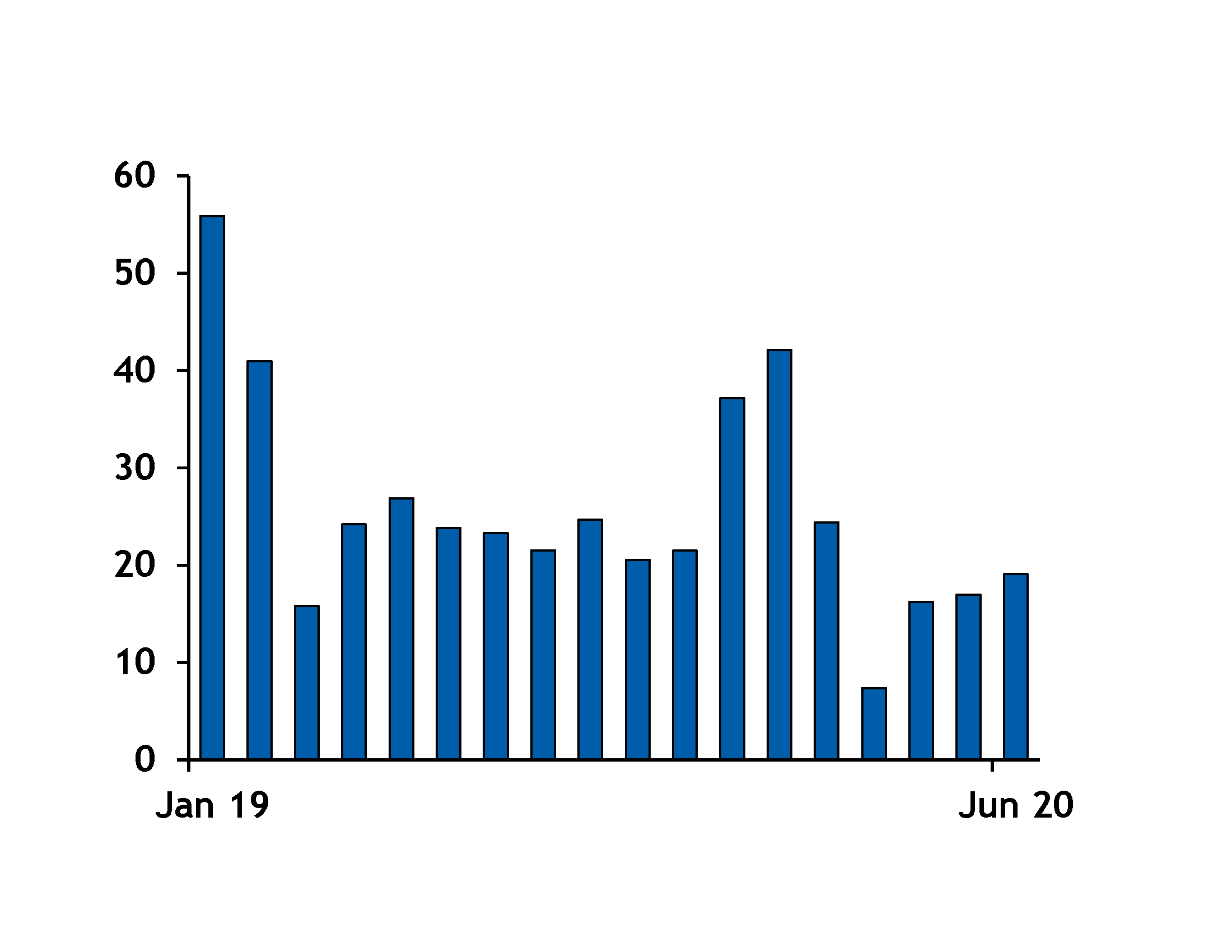 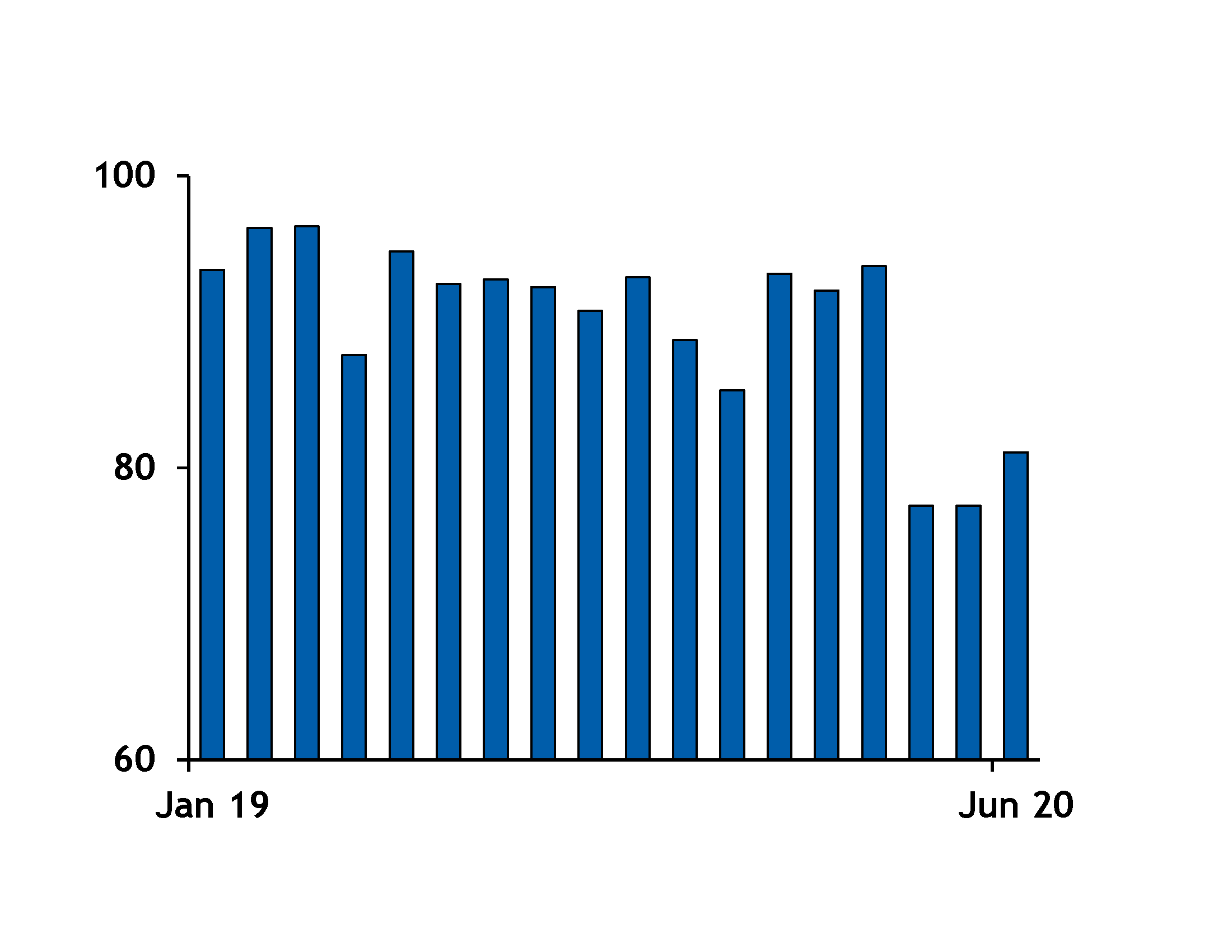 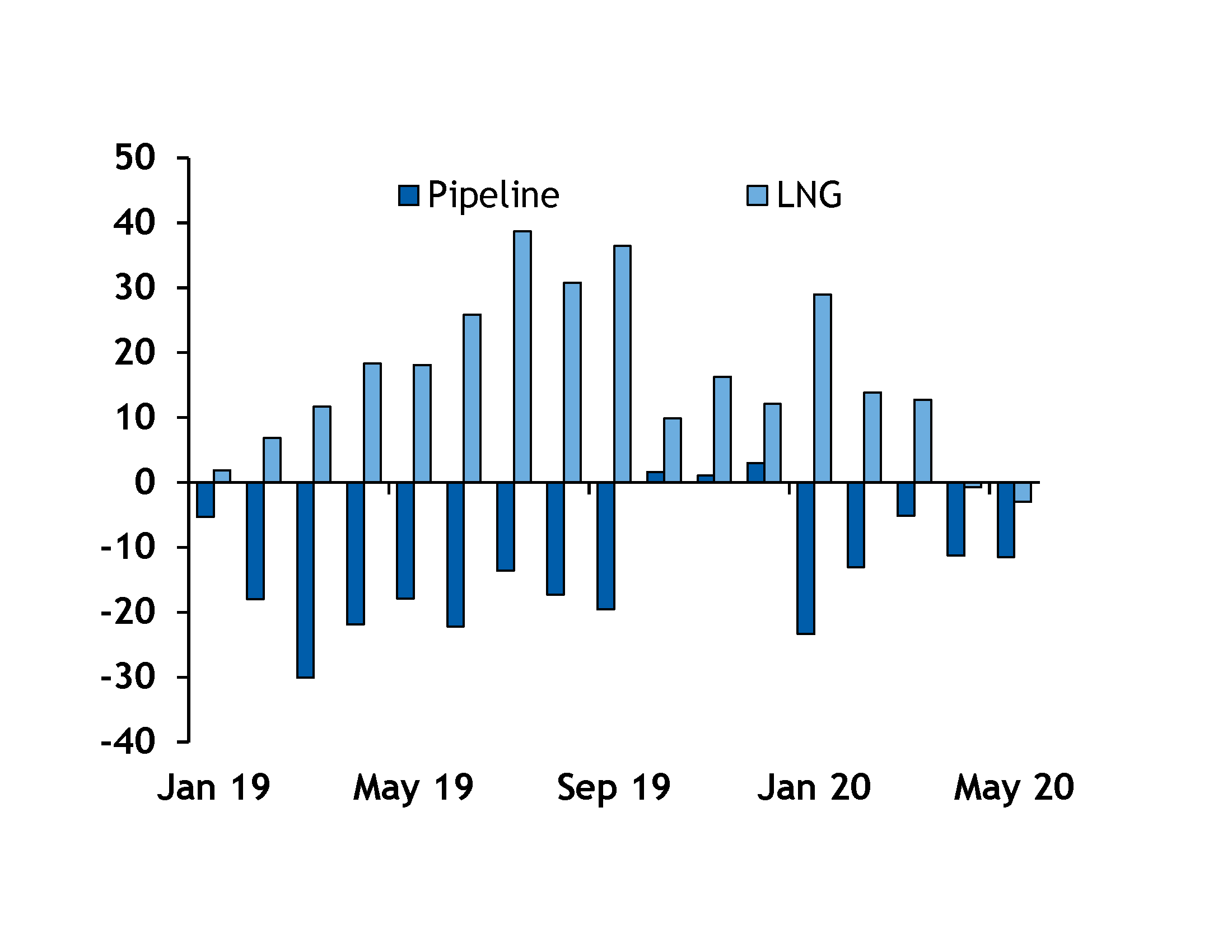 The LNG market is not immune to these tensions between buyers and long-term suppliers. Long-term LNG contracts are even less flexible than similar pipeline gas contracts. LNG contracts typically allow buyers to turn down their receipts by only 5-10pc in a given year, much lower than the permitted reduction tolerance common in oil-linked pipeline gas contracts — typically 10-15pc, but much higher in some cases. Even worse, LNG contracts generally require those reductions to be nominated at the start of the delivery year, although there is a rising clamour of requests for mid-year adjustments.

Some firms may succeed in securing mid-year adjustments to their offtake commitments. UK-based Neptune, the operator of Indonesia’s Bontang liquefaction facility, has agreed to cut the take-or-pay thresholds for its customers by about 10pc. Others may be able to negotiate the deferral of some LNG supply until a later date. But for many, meeting their take-or-pay commitments by the end of this year will require them to focus on taking long-term contract supply at the exclusion of cheaper spot market cargoes. This could imply a significant reduction in LNG spot market liquidity compared with the flurry of opportunistic buying that marked the first half of this year.

Prompt European LNG prices have fallen to a discount to US gas prices in recent days, raising the question of whether US terminal operators could import LNG again.