Amid the current volatility in crude markets, secondary benchmarks such as WTI Houston are becoming an increasingly valuable tool for market participants to manage their price exposure.

One of the early lessons from US crude trading in the days after the collapse of the Opec+ production agreement has been the value the market puts on secondary benchmarks, particularly WTI Houston.

Open interest soared to more than 187,565 contracts — more than 187mn bl of crude — on 17 March on CME Group’s HTT contract, which settles on the trade month average differential price of Argus WTI Houston. Last week and into this week, the market was putting positions on HTT for months in 2021, while decreasing those for most months in 2020.

The WTI Houston physical price index on which HTT settles has maintained a much steadier relationship to Ice Brent than has the CME Nymex Cushing contract (see graph below). The moves emphasized that it is WTI Houston that global markets look to for signals of the Atlantic basin export price for US light sweet crude. 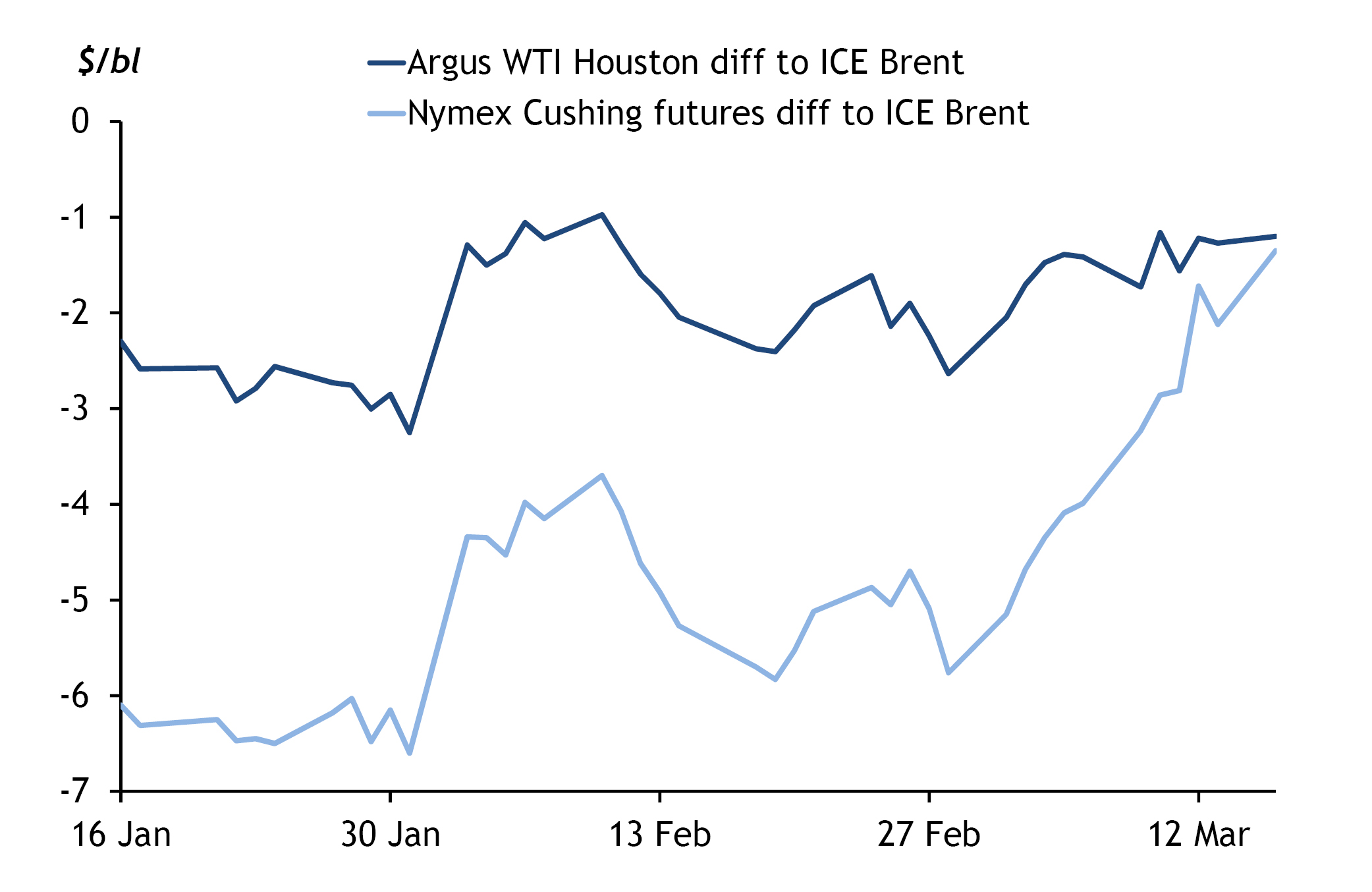 This relative abundance of storage at Cushing has made it a more desirable destination for crude than either Midland, near the Permian production wells, or Houston. In the past two weeks, the market has seen the price of WTI at Midland fall from a $1/bl premium to Cushing to more than a $2/bl discount, while WTI at Houston has fallen from a premium of $3/bl to Cushing to now trading at about parity to Cushing. 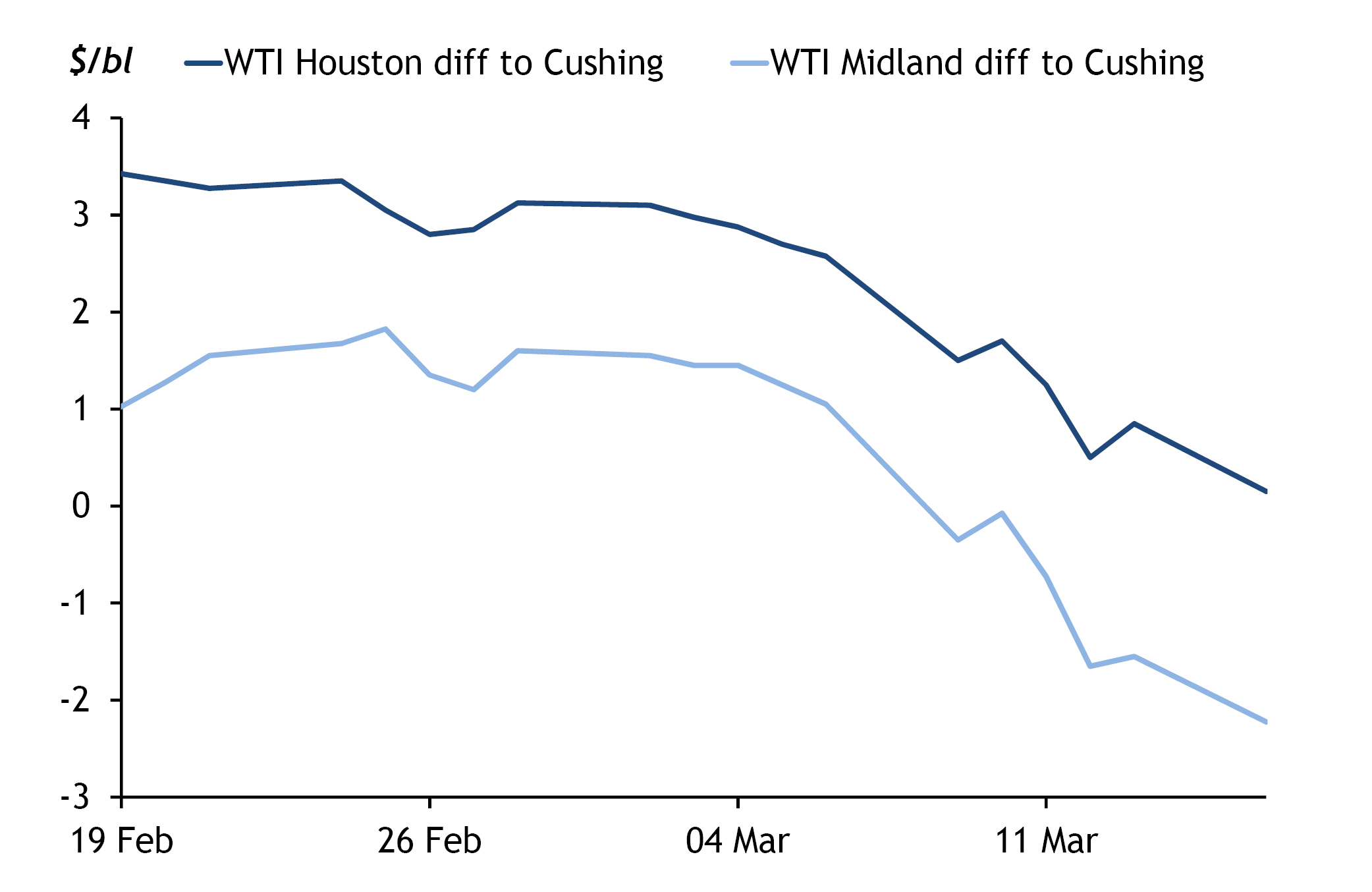 These relationships, and their volatility, have increased the desire of the market to manage its exposure to the price of WTI at Houston. Many companies learned the value of hedging the WTI Midland to WTI Houston spread in early 2019, when the lack of pipeline capacity between the Permian basin and the Gulf coast caused the spread between Midland and Houston to balloon to more than $20/bl.

Mexico has put in place a $1.67bn hedging program for its crude sales, using a series of “put” options, which Mexico’s finance minister, Arturo Herrera, says lock in a price of $49/bl.

Alongside the WTI Houston market development, an actively traded and fully hedgeable market for Canadian heavy crude at the Gulf coast has emerged. The Argus WCS Houston price index reflects the pooled trade of similar-quality Canadian Cold Lake and WCS at three locations in the Houston area — Enterprise’s ECHO terminal, Energy Transfer’s Nederland terminal, and the nearby P66 Beaumont terminal. The industry has embraced this pooled price index for Canadian crude at the Gulf coast, and Argus now has about 60 trades reported into this index each month (see graph).

Volatile markets lead many market participants to seek additional pricing tools to protect their positions. With the VIX volatility index closing on March 16 at 82.69, the market is experiencing exceptional volatility. The Houston area has two relatively new pricing tools – WTI Houston and WCS Houston – that markets are using to address this uncertain price scenario.