The Covid-19 pandemic has had a disastrous impact on the lives and well-being of citizens across the world. Major economies have been temporarily shut down, while freedom of movement has virtually ground to a halt.

But could the silver lining of the resulting extensive cuts in global greenhouse gas (GHG) emissions turn governments’ approaches to meeting climate neutrality goals on their heads?

Global efforts to reduce GHG emissions are set to ramp up this year, as countries are due to submit their revised nationally determined contributions to the Paris climate agreement. These targets will be for 2030 emissions reductions, but with some parties to the treaty having already set goals to reach climate neutrality by 2050, including the EU, significant cuts in CO2 output will have to be achieved in the coming years.

The most favoured approach so far to bringing down output has principally focused on the supply side — reducing emissions at their source. This has led to the incentivisation of renewable power generation and fuel development, alongside the penalisation of more carbon-intensive processes.

EU member states have subsidised the development of green energy infrastructure and innovation in new forms of low carbon technology, while raising the costs that polluters must pay for their emissions.

The EU last year reduced market supply of carbon credits under its emissions trading system (ETS) to support their value, further disincentivising polluting activities. The bloc is also considering introducing a carbon border mechanism to impose a price on the carbon footprint of imported goods. Some large industrial producers have committed to net zero value chains by 2050, including Shell, Total and BP and European cement association Cembureau. Countries such as the UK have pledged to invest in measures to prevent emissions from being released into the atmosphere when carbon abatement is not possible, including carbon capture and storage technology. But the large reductions in emissions seen so far this year have had little to do with such measures. In fact, a drop in demand for carbon allowances pulled down the price of carbon in the EU ETS market to its lowest in 20 months in March, technically making it cheaper for complying entities to pollute, and opening up the opportunity for firms to hedge their carbon output for the coming years at a lower cost. 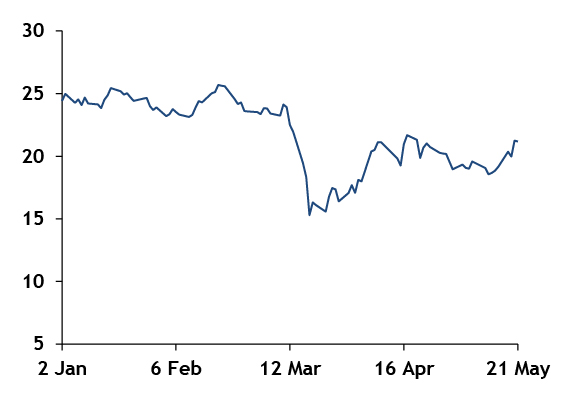 The drop in CO2 output has been caused by the reduction in power generation, industrial output and aviation sector activity because of Covid-19 restrictions, as a swathe of European industry has been forced to a halt and individuals’ movements have been limited by nationally-imposed lockdowns.

And the effects are not negligible. Analysis by environmental think-tank Sandbag predicts that EU ETS-covered emissions will be down by 14-19pc on the year in 2020. Some fallout has already been seen in the German and UK power sectors, two key European demand hubs, where emissions hit record lows last month. This opens potential for policymakers, which has so far been largely underused. If behavioural changes can be effectively incentivised, significant reductions in demand-side GHG emissions could be achieved. For example, as has been seen in recent months, if more people can be encouraged to work from home on a regular basis and to limit unnecessary air travel, power and fuel usage will drop significantly.

UK government advisory body the Committee on Climate Change (CCC) has already alluded to the importance of such measures, pinpointing “a shift towards positive, long-term behaviours” — including increased home working — as a key aspect of its advice to the government, published this month, on a resilient recovery from the coronavirus crisis.

But such developments hinge on climate policy not being pushed to the wayside as governments scramble to rescue their economies from the effects of Covid-19, and the CCC is not the only body to have emphasised that any recovery from the pandemic should be a “green” recovery. Members of the European Parliament voted last month to call on the EU to ensure that any financial stimulus provided to member states in the wake of the pandemic will be aligned with the bloc’s climate action objectives.

It remains to be seen how individual governments will respond to such calls, with concrete recovery measures for the most part still to be announced. But this global crisis has undeniably highlighted the significant potential that reducing demand for carbon-intensive activities holds for the attainment of climate ambitions that continue to pose an enormous challenge.

Read more from our emissions team

Download the recent whitepaper EU ETS emissions set for further sharp decline to access analysis into the fall in ETS emissions seen last year and an outlook for how steep the decrease is likely to be this year.