Ruxandra Iordache, who follows Mediterranean crude markets for Argus, joins to talk about the sudden comeback of the primarily light sweet crude from Libya and what the implications are of this additional volume in the market.

Libya crude oil production, which is primarily light sweet, has seen a sudden comeback. And with me is Ruxandra Iordache who follows Mediterranean crude markets to talk about how this affects global trade. Thanks so much for your time, Ruxandra.

Ruxandra: Hi, Jessica. Thank you so, so much for having me.

Jessica: So now that, you know, you've been following the Libyan oil industry for some time, could you give us some background to this latest research?

Ruxandra: Sure. So Libyan production has historically been very closely linked with the political stability within the country. Unfortunately, that has been in a state of turmoil and suffering, some kind of civil unrest since 2014. There have been certain escalations between two factions within the country since April last year, which culminated in blockades that effectively shut in production from all onshore Western fields and exports from all onshore Eastern ports since January. 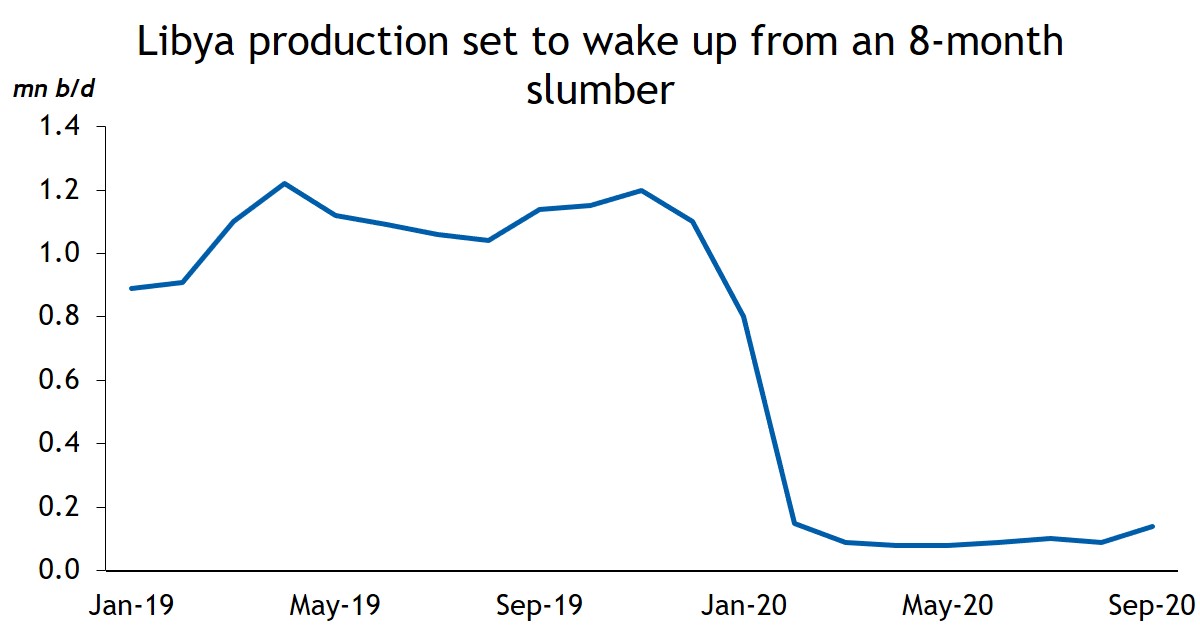 Now, there has been a restart under the terms of a preliminary agreement since the middle of September. This provisional accord kind of set out to only cover one month's duration but has happily since been informally extended because of a permanent ceasefire deal that was announced at the end of October by the UN between these rival factions. So we are potentially now looking at a full recovery of Libyan supplies. Having said that, you know, Libyan fields because of smaller-scale conflict, because of power outages, because of infrastructural collapse have not always been the most reliable in terms of their production rates. So even though, obviously, output is rising and the expectation is that we are looking at significant volume re-entering the market, it is a little difficult to envision a precise figure that will be reached.

Jessica: So is this a permanent opening or should we expect the fighting to re-escalate and for production to subsequently halt again?

Ruxandra: So it's a little bit challenging to call it on the long term. The ceasefire agreement is certainly very promising and the fact that the UN has been and remains very heavily involved in monitoring and mediating this conflict is again a positive sign. That said, regardless of the longer term, Libya has had a phenomenal ability to come back online, just hit the ground running, as the sweet cliche goes, whenever there has been an opportunity to export and to produce. And another supportive factor is the fact that oil revenues are essentially the backbone of the Libyan economy and both rival factions a very much aware of this and both have an interest in seeing the money come in.

Jessica: So how much production has come back and how much could come back?

Ruxandra: So our sources within the country today said that production had reached close to 830,000 b/d. The National Oil Corporation around the 23rd of October said it expected to reach 1mn b/d within four weeks of then. To give you just a quick glimpse, it compares with Argus estimates of average production at around 1.1mn b/d in December. Last year's high was close to 1.22mn b/d, again, according to Argus estimates. Having said that, we do need to disclaim the fact that the National Oil Corporation has not necessarily been able to carry out all the maintenance that it would have wanted to on the fields that were blockaded and it hasn't necessarily evaluated all the infrastructural impact of the blockade. So there may be obstacles in the way of fully resuming production that the company itself has not had the chance to assess just yet.

Jessica: And so I guess on the pricing side, have we seen an impact on that yet?

Ruxandra: The pricing impact has been slightly more modest just because prices for light sweet crudes, which as you mentioned encompassed most of the Libyan production, have generally speaking been depressed in the European and Mediterranean markets. We're looking at rival flows of, let's say, Algerian Saharan Blend, Azeri BTC Blend, and also, not as much of a newcomer for you in the states, but for us, certainly, you know, West Texas Intermediate. It's been gaining a foothold with the European refiners and it'll probably take something of a hit.

Jessica: So what are the wider implications for more Libyan oil production?

Ruxandra: We are potentially looking at 1 million barrels per day of relatively unexpected light sweet production hitting the markets. Libyan internal consumption is fairly small, so basically, most of what they produce will actually be exported. To give you an idea, Algerian production, according to Argus estimates was close to 910,000 b/d between January and September, so you're already looking at Libyan volumes exceeding that.

So on the market side, we are looking at further pressure on rival light sweet crudes like the Algerian flows we mentioned, the Azeri flows we mentioned, the US crude shipments into Europe, which according to Vortexa data have been just on the 1.2mn b/d to date. This is primarily WTI and Eagle Ford, so again, light sweet. Also, just because of lower demand worldwide, there has been an overhang of West African grades, which are also set to suffer because they are also, you know, light sweet or medium sweetish.

But even beyond that from a slightly more macro point of view, you are looking at the Opec+ coalition and its ongoing output restraints agreement. Now, Libya, Iran, Venezuela, they're all Opec members who are exempt from actual quotas, but the coalition's joint technical committee, the joint ministerial monitoring committee already in October have had to put in special provisions for a new case that posits sharp increases in Libyan production and lower demand. So this is obviously on their minds and it may well be one of the critical factors that end up impacting their decision to unwind or to continue the current production cuts.

Jessica: Thank you so much for giving us an update on Libyan oil production, Ruxandra.

Ruxandra: Thank you for having me and let's stay tuned.

Jessica: For more information on Argus's crude pricing, news, and analysis both globally and more specifically in the Mediterranean, consider subscribing to our Argus Crude service. You can find more information on this service at www.argusmedia.com. Thanks for tuning in, and we look forward to you joining us on the next episode of The Crude Report.

The Crude Report: Mind the (small) gap between light and heavy sour prices