The price was also up by $22/t on GASC’s previous purchase in September and $58.87/t above transactions in July, at the start of the 2020-21 marketing year. All three of Egypt’s latest purchased cargoes are Russian, as are 82pc of overall purchases for July-December shipment. 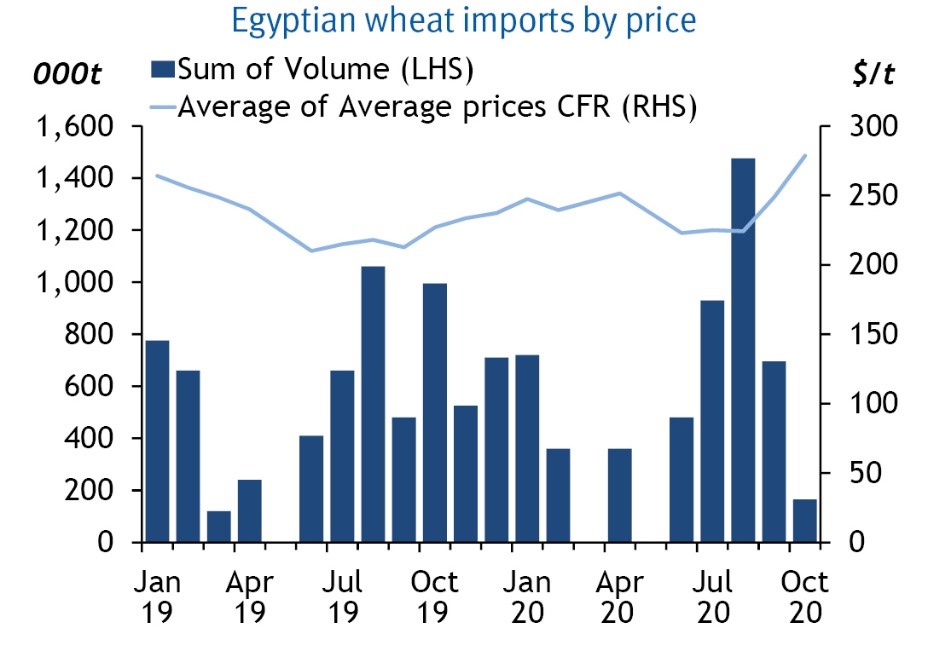 Russia’s supply dominance in Egypt this marketing year has been driven by lower production in competing seller markets in the Black Sea and northern Europe, following prolonged drought conditions during the growing season.

In Ukraine, France and Romania, wheat production is forecast to fall by 5pc, 25pc and 44pc, respectively, from last year as a result of the adverse weather. Ukraine and France have since set export caps on their wheat produce to ensure internal food security.

In contrast, Russian production is forecast to hit a record 80.5mn t this year, following optimal weather in the central and Volga regions, despite drought hitting the south.

As Russia’s bumper crop began arriving at ports for export in September, Egyptian orders gathered pace. GASC’s orders for September shipment rose to 1mn t, up from 519,000t August and 770,000t in September 2019. 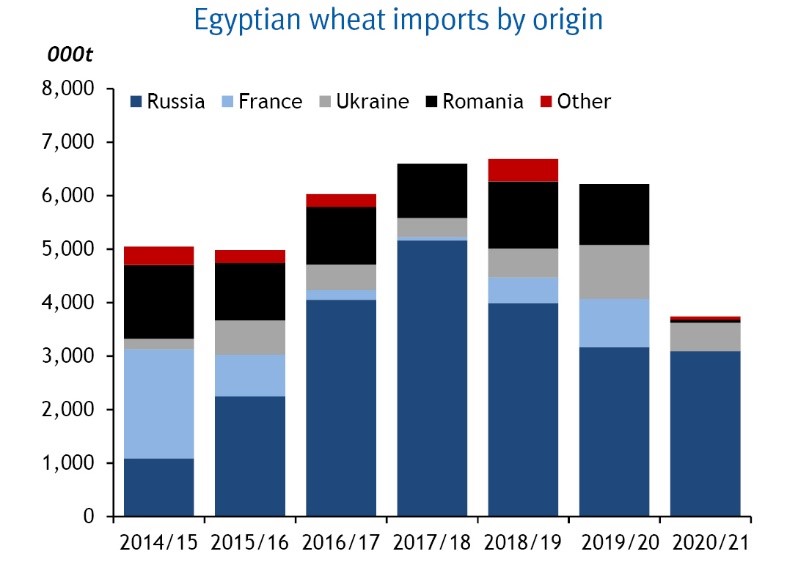 Egyptian demand for Russian wheat accompanied growing interest from less established buyers in Pakistan, Saudi Arabia and Algeria, as food security concerns escalated on tighter global supply and the prospect of a second wave of Covid-19.

In October, Pakistan waived import taxes and duties on a fixed sum of government-sourced Russian wheat, while state-run buying agencies in Algeria and Saudi Arabia relaxed their insect tolerance for wheat with a 12.5pc protein content, to attract more offers from Black Sea suppliers.

Amid the heightened demand, some Russian sellers even took to holding back wheat cargoes to spur additional price gains. And the rouble’s slide against the US dollar this season has only encouraged this trend, with farmers preferring to delay export sales until they can secure higher dollar-value returns.

Despite GASC’s record purchase price this week, the prospects for further increases are uncertain.

Overall demand is now waning for cargoes scheduled to load during the remaining two months of 2020, with buyers covered by a flurry of recent purchases. Sentiment in the futures market has also shifted to the cautious side in recent weeks, which could further encourage buyers to delay a return to the spot market until lower offers materialise.

Nevertheless, traders are largely confident that the market will not see any significant price reductions in the near term, with global supply remaining tight and state-run grains agencies still prioritising food security over securing competitive prices. Egypt's buying activity has shown little sign of slowing during early-November, with GASC returning to the market again on 5 November, with a tender to buy cargoes of between 55,000t and 60,000t, which could offer further support to market price.

Market Talks: What has changed in Brazil’s grains exports contracts?

Malaysian palm oil at a crossroads