This week, The Crude Report turns to the North Sea, with Michael Carolan, editor of Argus Crude, joining Alex Endress to discuss the current state of the Brent complex, its grades, production streams and what it may say about the future of the market and benchmarks.

I'm Alex Endress for Argus Media and I assess US crude prices, but today we're talking about the North Sea. The Brent complex made up of five North Sea benchmark streams is a traditional oil price marker that underpins a large portion of global crude contracts. Although it began as an exclusive representation of Brent crude, additional grades were introduced over time as physical production from the Brent deal declined. And this year, production declined has accelerated for all five streams, including Brent, Forties, Oseberg, Ekofisk, and Troll. And with me to explain this further is Michael Carolan, our Argus Crude editor. Welcome, Michael.

Michael Carolan: It's a pleasure to join you, Alex.

Alex: Glad to have you. So let's begin with just a bit of context regarding these five different streams. How has production changed over time for these different grades that make up the North Sea Dated benchmark? 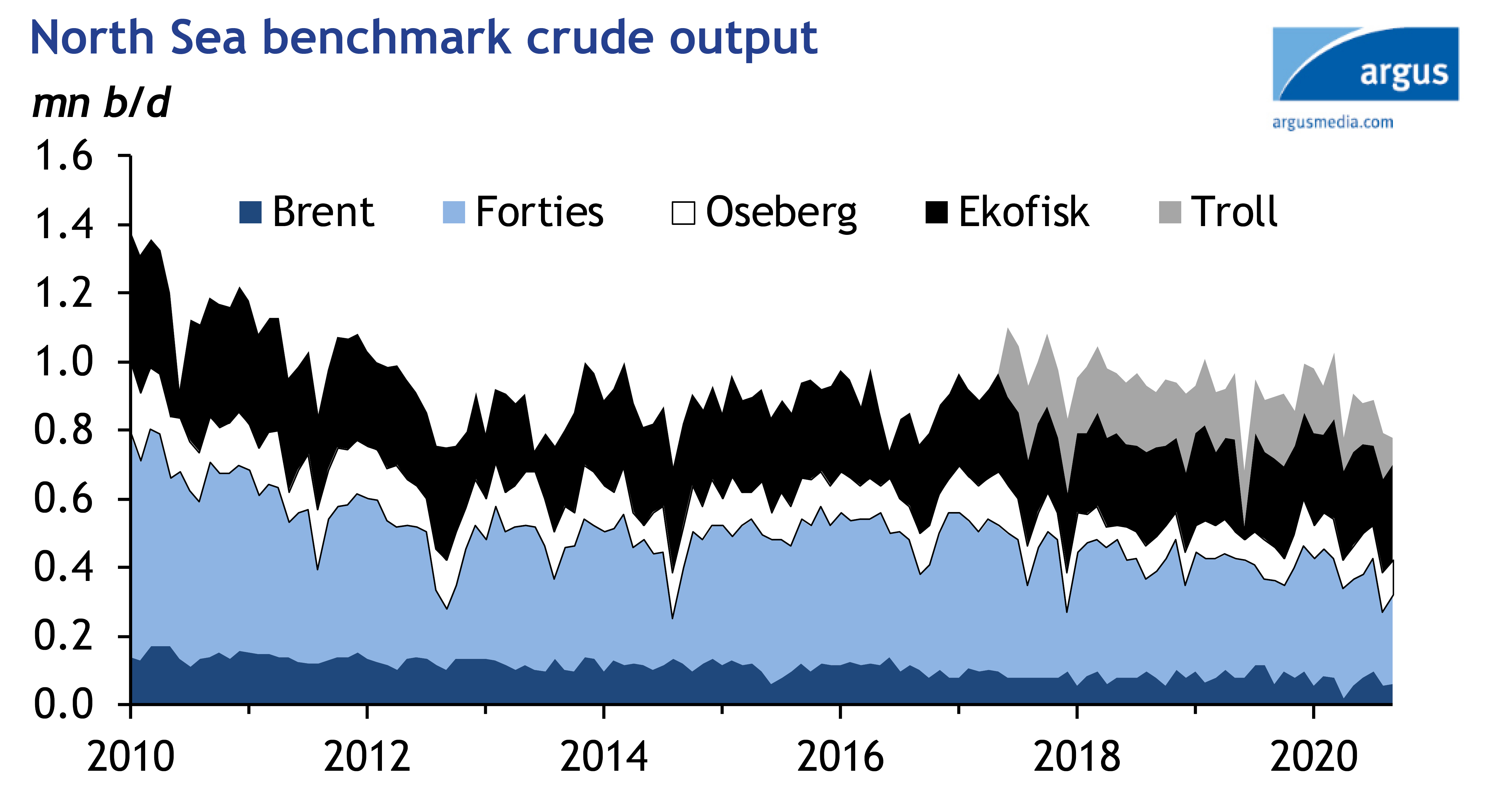 Michael: Well, as you know, the Brent field has been with us since the 1970s and it has acted as a European benchmark since the '80s. Historically, Brent was large enough on its own to act as a benchmark, but over the years, volume concerns meant that other grades needed to be added to add to the volumes. The last of those was Troll that was added in 2017. It boosted Dated underlying volume to around 1mn b/d. Now that's a long way short of the peak, but it's efficient for a functional benchmark. Unfortunately, those volumes have declined once again, and this year, volumes look to set to fall to levels similar to prior to Troll's inclusion.

Alex: And so we know that Forties is the largest and most heavily traded of the five grades, but its decline is particularly marked this year. With that in mind, how does current Forties output compare to what we've seen in years past?

Michael: Yeah, the Forties decline has been particularity marked this year and Forties is typically the lowest priced of the five grades, and that means it's key in setting the benchmark and has been for many years. The first half of this year production was down 10% year-on-year and in the second half it's been lower still. So a full year, Forties production looks set to fall below 310,000 b/d - that would be the lowest since 1976. Now the concern is that the rate is accelerating. So Forties production's on course to fall by 13% year on year in November. And in December that's gonna be more than 20%.

Alex: I also understand that there's been a delay to the startup of the phase two development of the Buzzard field. I believe that's the largest field on the FPS (Forties Pipeline System). How could that affect expected North Sea data volumes?

Michael: Yeah, that's right, the Buzzard phase two development has been in the pipeline for many years and it was due to start this year but has now been delayed to next year. That's because of the lower oil price environment and pipeline maintenance issues. But it's important to remember when it starts up, it's gonna add just 37,000 b/d to Forties' production. Now that in itself is not enough to offset the current rate of decline seen in fields other than Buzzard.

Alex: Yeah, and despite that expected delay combined with declining Forties output, we also know that other streams are in decline. How was the overall makeup of North Sea Dated shifting and how would you expect that to evolve in the near to long-term future?

Michael: Yes, the production of the Brent grade in particular is running almost 25% below last year's levels and the production rate of Troll is quite interesting because, before it was added to the benchmark, it was producing around 225,000 b/d - that's in 2016 - but that's now below 145,000 b/d. So combined loadings of the five grades this year are gonna be roughly around the level that was produced by Brent, Forties, Oseberg, and Ekofisk in the year before Troll's addition to the basket. But that decline has not really affected the number of trades, bids, and offers needed for price discovery for Dated Brent, or North Sea Dated as we call it. There was a change to the methodology last year to Dated Brent, which means trading activity in cargoes delivered to Rotterdam is also used in setting the benchmark.

So this has increased the apparent trading activity. But the fact remains, Europe's main crude benchmark is based on an ever-dwindling number of cargoes. And that decline could accelerate as we go forward. The long-term outlook for the North Sea is not promising. Remember, these fields have been around for decades and the declines would be greater still, but for the addition of fields over the years into those streams. Investments have now slowed, so the pipeline of new developments is shrinking. Equinor announced just this month that there are going to be delays to a number of its projects as well as rising costs. And I imagine other operators in the region are suffering similar delays. So it's unlikely that declines for mature fields in the North Sea can be offset by the new startups.

Alex: Yeah, so Michael it does sound like the long-term outlook for North Sea production is less than stellar. Do you think there's an opportunity for a new benchmark? I mean, for example, Argus recently launched the AGS Marker which represents Midland-quality crude at the Gulf coast. So long-term, this seems to be a growing market that will be bolstered, of course, by US exports in Permian production.

Michael: I think it's inevitable that US crude will eventually play a role in European pricing, whether that's a separate benchmark or is part of the Brent complex is unclear. The volume of US crude bought in Europe is already greater than the combined volumes of Brent, Forties, Oseberg, Ekofisk, and Troll. There have already been moves to integrate WTI into Brent. At Argus, we have been running an alternative New North Sea Dated price in recent years. This includes our own delivered Rotterdam WTI price that's an accurate reflection of the European landing price of WTI. But it could be that coastal US price such as Argus AGS could eventually be regarded as a reliable Atlantic basin benchmark on its own. That remains to be seen.

Alex: Well, that will be an interesting development that those of us in the US will be especially keen to watch. But that does seem to be all the time we have today. Michael, thanks so much for chatting.

Michael: Pleasure to join you, Alex.

Alex: And, listeners, the Argus New North Sea Dated assessment is available in our Argus Crude service, which you can find more information on at www.argusmedia.com. Thanks for tuning in and we look forward to you joining us on the next episode of The Crude Report.

The Crude Report: From Canada to Asia, with a Texas layover