It might be tempting to view the Australia-China trade spat as a simple case of all pain for Australia and all gain for other producers. But the shifts caused by China’s ban on Australian coal imports have not been that simple.

Is it all losses for Australia?

Australia in 2020 exported coking coal to four main countries — China, Japan, South Korea and India. Australia since the import ban was imposed has managed to diversify its customer base and exported more coking coal to emerging economies such as Turkey. This might be a good move in the long run, given the unpredictable nature of Chinese import policies. But the initial sting was inevitable, as Australian producers were caught unawares and are locked into fixed take-or-pay contracts with port and rail operators that forces them to ship premium coal at a loss.

Is it all gains for non-Australian coking coal producers?

Yes and no. The benefits to US and Canadian producers are obvious — they have gain access to an essentially captive market i.e. China, and are selling at unprecedented premiums to Australian coal because they lack alternative supplies of high-quality coking coal. But the blessing that Chinese policy brought to them could very well turn to bane. There is no sure way to tell whether or when Chinese policy might reverse to allow Australian imports again. Any product reallocation plan requires time and all this uncertainty might throw a spanner into the works for US and Canadian producers trying to build long-term relationships with customers.

Mongolian coal producers, which should be the biggest beneficiary of the Australia-China trade spat, have been unable to capitalise. Stricter border checks after an increasing number of Covid-19 infections have slowed its cross-border truck deliveries.

Coking coal producers in Mozambique and Colombia are also taking advantage of the opportunity as much as they can but they have limited supply upside. Two cargoes of Mozambican tier-two hard coking coal were sold to a northeast China steel producer at 98pc of the premium hard coking coal index over the past week.

What about the non-Chinese steel producers?

Perhaps the biggest winners of this trade spat would be any steel producer not in China. Excess supplies of premium low-volatile coking coal favoured by the Chinese has not only cut the prices for this coal but also for premium mid-volatile coal favoured by Indian buyers. Premium low-volatile coal averaged $127.28/t fob in the first quarter, down from $155.36/t fob over the same period last year. This is despite similarly rainy conditions in Queensland that typically constrain supplies to some extent at the start of the year. 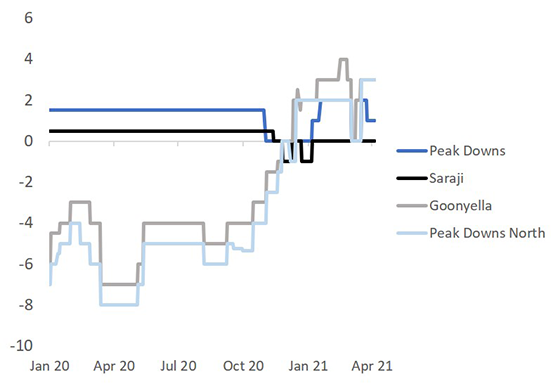 China’s loss = the rest of the world’s gain?

Ex-China steel producers paid lower prices for coking coal. But for producers unable or resistant to change, they saw higher costs for premium mid-volatile coal relative to premium low-volatile coal. This in a way penalised big buyers of brands not typically used by Chinese steel producers. The major buyers of US and Canadian coal now must compete with China, willing to pay a delivered price almost double the fob price for Australian coal.

When choice takes on a different meaning

The excess supply of premium low-volatile coal has narrowed the spread between premium coking coal and lower-tier met coal to unprecedented levels. A perfect storm of China’s import ban, the market’s forced supply cuts for lower-tier coal and "once-in-50-year" storms in New South Wales that hit thermal and lower tier met coal supplies the hardest. A two-week shutdown of a Newcastle shiploader added further fuel to the fire, pushing prices for thermal coal to within $20/t of premium met coal. 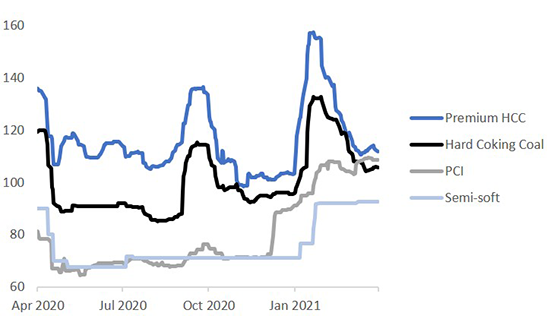 A lingering unknown that remains is when this situation will change. Non-Australian coal producers are aware of the fact that Chinese policy is fluid and there is no telling which country they will choose to target next. Buyers and sellers alike will play this situation to their advantage while they still can and be prepared for the next big shake-up to come.

5 things we learnt from the Suez Canal blockage

Combined coal-fired generation in key global markets rose on the year in July-September as a result of a swift economic recovery in China, but overall coal burn remains below 2019 on a year-to-date basis.