Welcome back to our monthly blog: The US Crude Export Chronicles, by Senior Reporter Eunice Bridges (@eunicebridges12) and Associate Editor Amanda Hilow (@HilowMidpoint). Come back every month for Argus’ take on US crude exports and how they are faring in an uneven Covid-19 recovery.

The key word this year: Volatility. Light sweet waterborne crude prices at the US Gulf coast have swung from a one-year high to a six-month low so far this year as Covid-19 lockdown measures erode demand in Europe and Asia-Pacific.

May-loading WTI fob Houston fell by 50¢/bl against July Ice Brent over the course of the trade month to close at a roughly $2.50/bl discount to the international benchmark by 23 April, reflecting the waterborne crude’s deepest discount since September 2020. The fob assessment had touched its highest value since before the Covid-19 pandemic less than two months prior, at a roughly 90¢/bl discount to Ice Brent on 10 February, when US and global values alike drew support from expectations of an extra 1mn b/d cut in Saudi crude supplies. 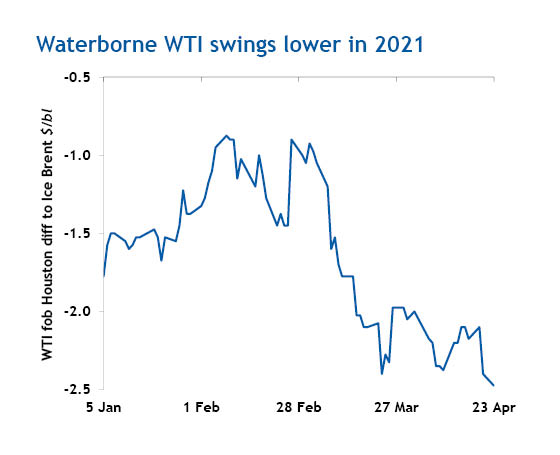 Meanwhile, the latest US Census trade data was not pretty. US crude exports fell by a whopping 14pc in February to 2.65mn b/d, the lowest monthly average in about two years. To be fair, the numbers were partially skewed by a brutal winter storm in the US midcontinent and Gulf coast that shut down production, caused widespread power outages, and disrupted pipeline and port operations. Still, the February drop was larger than expected and weekly estimates by the Energy Information Admiration show an average below 3mn b/d in recent weeks.

India repeated as the top buyer of US crude in February with about 460,000 b/d, but the demand picture is turning bleak in that country as its Covid-19 outbreak worsens. India recorded more than 350,000 new Covid-19 cases on 25 April, the highest single-day tally anywhere since the pandemic began. As such, transportation demand in India is likely to weaken further in the coming months.

As a reminder, India became one of the top buyers of US crude last year, helping to keep exports resilient despite the pandemic. But that boost could be waning.

At the same time, US crude headed to China in February averaged just 270,000 b/d, down by 120,000 b/d from the previous month as trade tensions continue to simmer between the two countries. US crude exports to China have dropped sharply from the 690,000 b/d average in May-December last year.

Moda Midstream in early April resumed some loading operations at its terminal in Corpus Christi, Texas, that had been curtailed after a vessel lost power and clipped a structure at the end of a pier the previous month. Moda, which has been tight-lipped on specifics, said it resumed loading operations at the affected berths “on a modified basis," but that it will take "several weeks" to fully restore operations.

Further inland, the fate of the Dakota Access pipeline (DAPL) hangs in the balance – again. The 570,000 b/d pipeline is facing a possible shutdown order in federal court in a case involving its environmental permitting. A shutdown was first ordered last year, but owner Energy Transfer and the US government appealed. DAPL is part of Energy Transfer’s Bakken pipeline system which connects North Dakota to the Texas coast.

In the latest action, US District Court judge James Boasberg asked the administration of President Joe Biden, represented by the US Army Corps of Engineers, to take a position by 3 May on whether to shut DAPL.

And a last interesting nugget of midstream news — Energy Transfer and Centurion are offering a joint tariff to move crude from Platteville, Colorado, and Cushing, Oklahoma, to Nederland, Texas. The joint tariff service will use existing pipelines linked by new connections in Oklahoma. In summary: more Rockies crude could reach the Gulf coast.

A slew of midstream earnings the first week of May including Enterprise, Magellan, and NuStar should paint a more definitive picture for crude exports in 2021. We’ll be listening.

And Opec+ has postponed its next ministerial meeting until 1 June, when it will revisit the existing production curtailment policy. Earlier this month, Opec+ agreed to increase production by a combined 350,000 b/d in May and further increases through July, while Saudi Arabia planned to unwind its additional voluntary 1mn b/d cut over the same period. For now, the production policy will remain unchanged.

The Joint Technical Committee (JTC), which monitors market conditions, raised concerns about global oil demand during the 26 April meeting following the drastic surge in Covid-19 cases in India, as well as new waves of the virus in Europe that have resulted in further lockdown measures.

We’ll be watching how the market reacts to the worsening Covid-19 situation. In the meantime, we wish you smooth sailing in these choppy waters.