The LME’s fob China hot-rolled coil (HRC) contract has surpassed $1bn in nominal trade since its launch in March 2019, making it the fastest international steel futures contract to reach this threshold.

The quick uptake of the derivative product is worth noting because it underscores demand for ferrous derivatives by the world's second-largest commodity complex with 2bn t/yr of crude steel production.

Steel is a crucial and omnipresent material in the construction and manufacturing sectors, but almost uniquely the commodity has few hedging tools compared with non-ferrous metals. Surging steel prices over the past year have added billions of dollars in costs for users. US HRC prices are the highest, at record levels above a $2,000/metric tonne (mt) ex-works equivalent for US Midwest coils. That is four times prices of around $500/t a year ago. Americans buy in short tons (st) so the index level has risen to $1,850/st from $455/st over the period.

The effects of that increase have filtered through into markets such as construction, where projects have been put on hold. Waiting it out is one strategy, but price increases are proving persistent, rather than transitory.

GFI brokers the trade for the milestone

Steel broker Henry Herbert at GFI cleared 300 lots on 29 July to take the contract above the billion-dollar traded level. “Thrilled to hit the milestone. We’ve been broking this market since the day it launched,” Herbert said.

The 3,000t October trade was done at $980/t, highlighting a significant contango to the physical spot market’s price level at $930/t, with the forward curve pricing in an expectation of a new highs being set for the year. July prices are up 96.6pc year on year.

Fob China HRC is not the only contract setting records. The CME Group's North European HRC contract set a new monthly record for trade on 29 July, taking the month above 40,000t traded. The CME contract launched in March 2020. 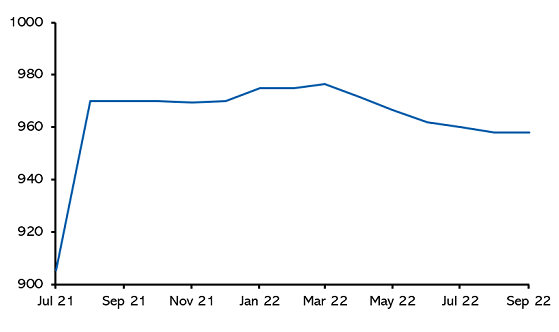 Nothing is a given in how markets develop. For more mature markets like oil and non-ferrous, major pricing hubs were established decades ago. For ferrous, it is a work in progress to see how contracts will develop across regions and products.

Right now, three major HRC hubs are trading: China, Europe and US. Traders and consumers can hedge or trade against differences in each region’s fundamentals and policies. The past year has given markets a lot to trade and hedge against, with differences in the regions more apparent. 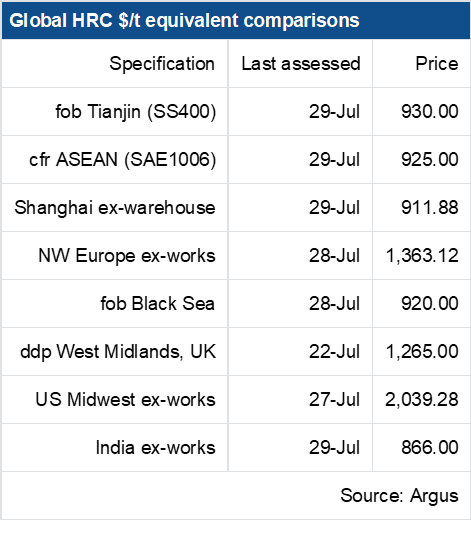 Chinese HRC prices, at less than half the price of US HRC, merely doubled compared with a quadrupling for the latter over the past year. Differences in regional supply and demand as well as in economic, trade and environmental policies are major factors:

Weight of Freight — Not a magic bullet: Opec+ boost could have little impact on VLCC freight

Editor-in-Chief Jim Washer talks to Dubai Editorial Manager Nader Itayim about the Opec+ alliance’s new output agreement, the Saudi-UAE row that nearly derailed it, and the challenges the group could face, not just through to the end of this current deal, but even beyon...