Global Group I base oil prices were mostly lower as supply improved and demand slowed. Prices have fallen sharply in the fob Baltic market especially. Prices have held firm in the US market. Prices for Group II and especially Group III base oils have also held firm because of strong demand and still-tight availability.

Fob Baltic Group I SN 500 prices have fallen by more than $450/t since mid-June to their lowest since March. Prices have fallen in response to rising supply following the completion of a protracted round of plant maintenance work in Russia. At the same time, demand has slowed everywhere from Europe and Turkey to Africa and India.

Prices have fallen more quickly than prices in Europe. The discount of fob Baltic SN 500 to domestic Europe SN 500 prices has widened to more than $400/t. The discount was the widest in more than a decade.

Baltic SN 500 prices had previously risen to a rare premium to Europe SN 500 prices as recently as February. Prices rose at that time after tight global supply triggered a surge in competition for supplies from the Baltic region.

That dynamic is now reversing. Even so, the steep discount of Baltic prices again boosts the competitiveness and attraction of Russian supplies in the European market. 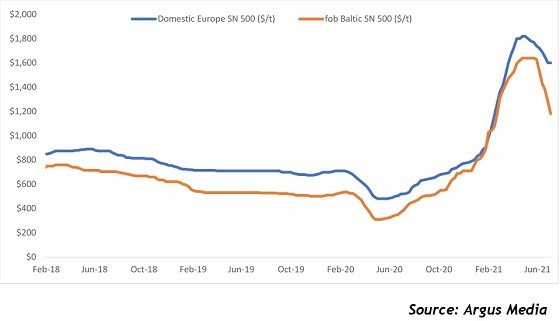 The competitive prices have opened the arbitrage to the US. A growing number of Group I base oil shipments have been lined up to move from the Baltic region to the US market this and last month. 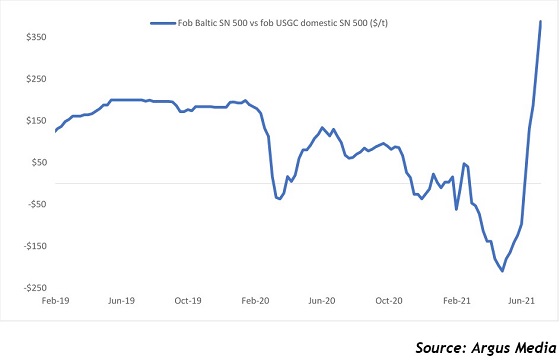 The weakness of Group I heavy neutrals has extended to the Asia-Pacific market. Supply has improved following a pick-up in production in key sources like Japan. Rare shipments from China to southeast Asia have added to availability. Competition for supplies has eased.

Prices have fallen in response. Prices for fob Asia SN 500 have dropped by $200/t since mid-June to their lowest since March. The lower price has cut the premium of fob Asia Group I prices to domestic China heavy-neutrals prices to its narrowest since February. The narrower premium could complicate subsequent arbitrage flows from China to southeast Asia. 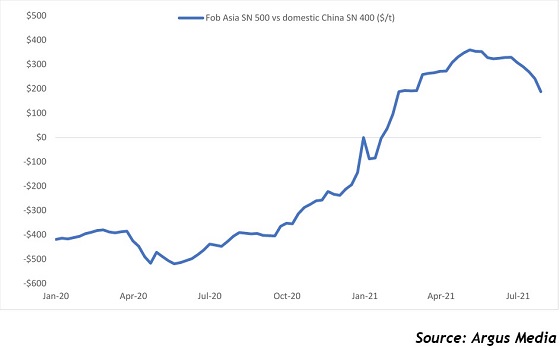 The price weakness in a growing number of markets contrasted with ongoing price strength in the US market. Prices have held firm because of still-tight supply and strong demand for all grades, and Group III base oils especially.

The price strength has pushed US Group III base oil values to increasingly steep premiums to Group III prices in competing outlets like Europe and China. The US Group III premium to European prices has risen to its highest in more than a decade. The steep premium incentivizes producers to move more supplies to the US market.

US Group III prices extend rise versus other markets 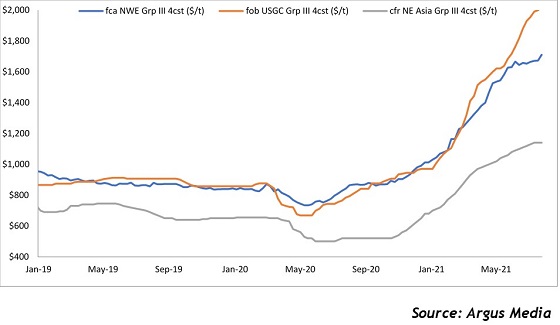 Global base oil prices were mixed. Prices in Europe and Asia-Pacific have fallen as supply tightness eased and demand slowed. US prices have extended their gains in response to supply tightness and strong demand. Buyers in Latin America have struggled to cover requireme...