Traditional wisdom on price linkage is increasingly being challenged by developments.

If further evidence of the decoupling of LNG and oil prices were needed, the last 12 months provided plenty of it. When crude demand and prices collapsed last spring as the Covid-19 pandemic swept through many of the world's advanced economies, gas demand remained resilient, as locked-down populations continued to heat and light their homes. And when gas demand rose towards the end of 2020, the ensuing price rally far outpaced the crude market's more modest recovery in the summer.

Of course, all of this is relative. Gas prices were low as 2020 began, as a succession of mild winters exacerbated a structural oversupply resulting from overenthusiastic investments made years previously in new LNG export capacity. The usual summer dip in prices took global gas prices to their lowest in many years, even cutting through all layers of fuel-switching against coal, which had traditionally provided a floor for gas prices.

As 2021 began, another historical price relation was put to the test. With cold weather blanketing the northern hemisphere and Japanese utilities caught off guard by a combination of nuclear restrictions and low LNG stocks, LNG prices reached unprecedented highs. The Argus northeast Asia (ANEA) des price peaked at $39.72/mn Btu on 13 January, almost double the highest price that Argus had recorded previously — before swiftly declining in the second half of that month to more familiar, albeit still high, levels.

This peak was a staggering 70.6pc of the Brent crude price, eclipsing a previous high of 20.8pc of Brent set in January 2015. 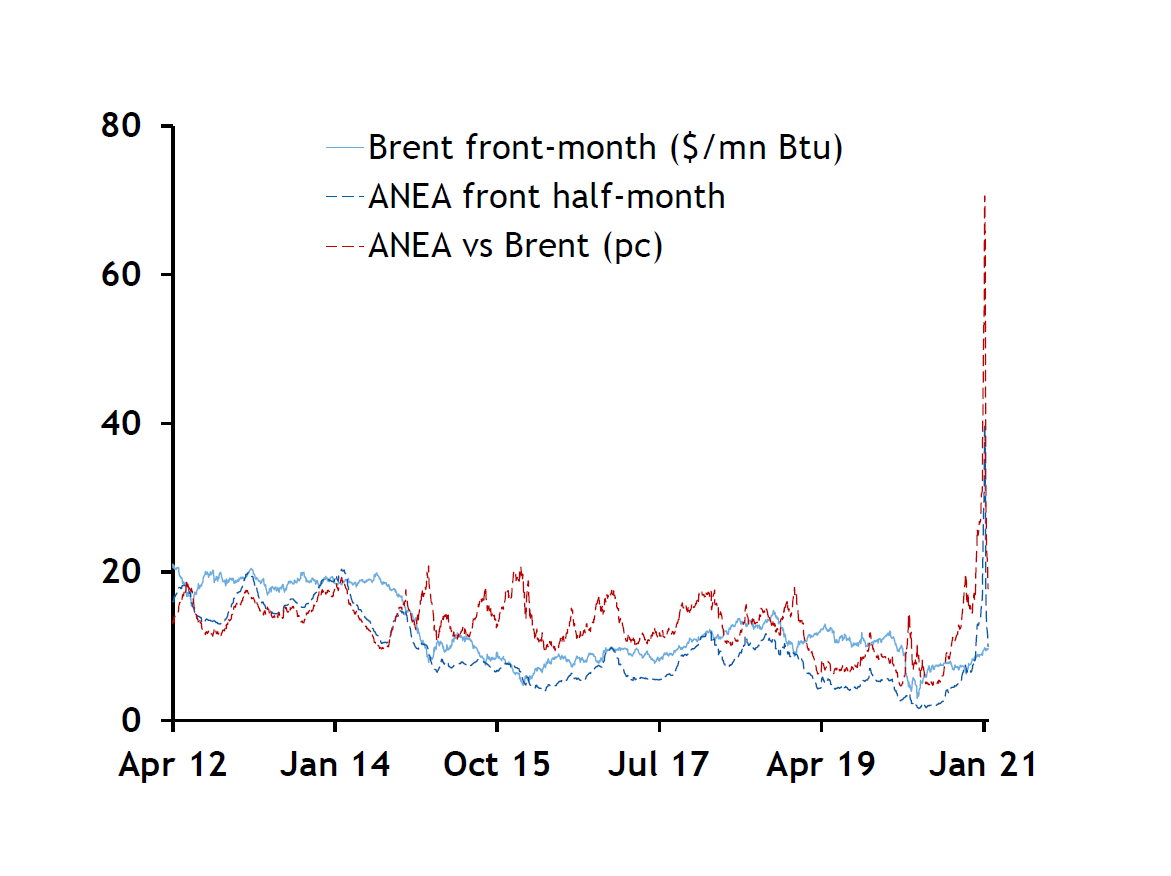 As one barrel of oil contains about 5.8mn Btu, traditional wisdom has it that LNG prices are capped at about 17.2pc of Brent — so-called "oil parity". Beyond that, it would cost less to burn fuel oil to generate electricity.

But this traditional wisdom is antiquated. Oil-fired power plants account for just 4pc of total installed capacity in Asia-Pacific. And in Japan — the only Asian country in which oil-fired power plants still account for a double-digit (13pc) share of the generation fleet — fuel oil contributed little more than 1pc of the country's power output in the year to September 2020, down from 2pc a year earlier and a three-year average of 3.1pc.

And as curbs on climate-changing emissions tighten in the region, it is increasingly unlikely that these oil-fired plants will be used for much apart from emergency back-up. Japanese utility Jera — the largest power producer in the country, accounting for a quarter of national power supply — has not used any of its 10.1GW of oil-fired capacity since April 2020 at least.

Oil’s influence over the gas market persists in the form of indexation in long-term contracts. But this oil linkage provided perverse price signals to the market last year, with crude-indexed prices higher when demand was at its nadir and lower when demand spiked. Producers that had widely used oil indexation to shield their portfolios from spot price volatility saw their margins slashed, and the fourth-quarter rally in spot LNG prices did little to bolster oil-indexed revenues.

The US' emergence as one of the world's largest LNG producers, and by far its most flexible, is already playing an important role in redesigning the global gas market, allowing it to readjust to demand swings at hitherto unheard-of speed, although shipping constraints can at times hamper its global reach. A more dynamic shipping market will only strengthen its role.

The global gas market needs its own price to signal to the market when to invest, and when not to, if it is to escape the extremities of the business cycle seen over the past decade. And however much it may discomfit northeast Asian importers, the market needs price volatility, too — because only this will signal to the market that it needs to invest more in the flexibility that will help smooth price cycles and soften the market's peaks and troughs.

Why are carriers with US LNG changing tack for Suez?