US crude exports rose year-on-year to a new record high in 2020 despite falling production and reduced global demand during the Covid-19 pandemic.

Welcome back to our monthly blog: The US Crude Export Chronicles, by Senior Reporter Eunice Bridges (@eunicebridges12) and Associate Editor Amanda Hilow (@HilowMidpoint). Come back every month for Argus’ take on US crude exports and how they are faring in the still shaky Covid-19 recovery.

The hot topic this month was freezing — as in freezing temperatures across a large swath of the middle US, and Texas in particular.

The brutal winter snap wreaked havoc on energy markets and infrastructure, including pipeline flows to the US Gulf coast, with several large pipelines declaring force majeure, including Plains All American Pipeline’s 670,000 b/d Cactus 2 and 390,000 b/d Cactus pipelines, which move crude to Corpus Christi — the number one port for US exports.

In addition, production shut-ins helped boost the value of Midland-quality West Texas Intermediate (WTI) crude in the region as temporary curtailments peaked mid-week around 2mn-3mn b/d with some estimates as high as 4mn b/d.

The Argus AGS Marker — a new index of Midland-quality WTI trading across the Texas Gulf coast — climbed by $2.75/bl, or 4.6pc, during the freeze to a record high $62.45/bl by 17 February and has since reached an unprecedented $64.68/bl as refinery demand begins to resume.

The anxiously-awaited crude export trade data for all of 2020 is in and can be defined in two words: record high. Yes, you heard it right – record high. Despite Covid-19, despite a string of hurricanes and tropical storms battering the Gulf coast, despite a 2mn b/d drop in US production. Despite it all, crude exports still hit a record high of about 3.2mn b/d in 2020.

The continued growth in exports — especially after the pandemic hit hard in the spring — was largely thanks to China, which took about 690,000 b/d of US crude loaded in May-December, buoyed by the interim trade agreement signed last year with the administration of former president Donald Trump. The future of the deal is unclear as President Joe Biden’s administration reviews China's implementation of the agreement.

India also increased its intake of US crude toward the end of 2020, reaching a record 560,000 b/d in December as it continues to eye sour crudes loading at the US Gulf coast. 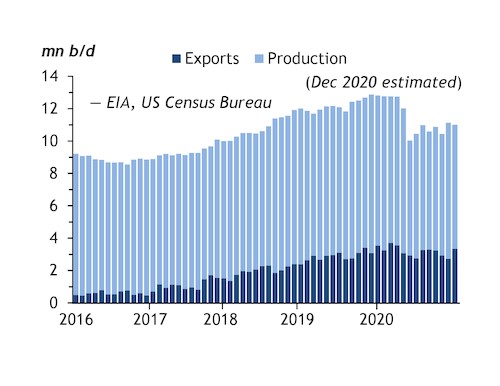 US midstream companies appear to be bullish on future exports, according to recent earnings calls. Key projects are still in the works that will move incremental crude to the Gulf coast despite major cuts in capital spending last year.

Plains, Marathon Petroleum and BP are moving forward with a reversal of the 1.2mn b/d Capline system, which will move crude southbound from Patoka, Illinois, to St James, Louisiana. The project is expected to start initial service in the first quarter of 2022.

And the ExxonMobil-led joint-venture 1.5mn b/d Wink-to-Webster pipeline linking the Permian basin to the Houston area has started initial service, with "real commitments" expected to start in the latter part of this year, project partner Plains said. Enterprise Products also started service on its portion of the Wink-to-Webster system last year.

Meanwhile, the drama surrounding Energy Transfer’s 570,000 b/d Dakota Access pipeline (DAPL) is taking a breather. A key court hearing on whether to shut the line during a new environmental review was postponed by two months to 9 April. DAPL is the largest pipeline out of the Bakken shale and connects to another Energy Transfer line to the Gulf coast.

Nymex light sweet crude futures re-entered contango —when the next month is at a premium to the current month — in the final days of the March US trade month as refinery interruptions during the freeze were slower to recover than production and pipeline flows.

US Gulf coast refinery runs plummeted 2.26mn b/d to an average 6.03mn b/d the week ended 19 February, while total US production averaged 1.1mn b/d lower than the week prior, according to the latest weekly estimates by the US Energy Information Administration (EIA).

Production and throughputs will both likely return to seasonal norms by the end of March, while waterborne prices for US light sweet crude continue to trend lower for March-loading cargoes.

We’ll be watching how the market recovers from the Texas freeze and, of course, the lingering Covid-19 outbreaks and related shut downs. Dial in early next month for a webinar detailing last year’s trade patterns. In the meantime, smooth sailing from Eunice and Amanda.