In this episode of The Crude Report, our reporters Alex Endress and Brett Holmes discuss the resulting lift in domestic prices which could support a return to crude-by-rail demand in 2021 and how Canadian crude is becoming more competitive on the global landscape.

Alex Endress: Hello and welcome to The Crude Report, a podcast series on global crude oil markets by Argus Media.

I'm Alex Endress for Argus and I cover US and Gulf coast crude markets. And joining me is Brett Holmes, our Calgary Bureau Chief that heads up coverage in Canada. Today, we're going to chat about how international demand for Canadian heavy grades may support arbitrage economics between Hardisty and Texas, and indeed return to crude-by-rail supply.

Demand from the Asia Pacific did materialize in 2020, but we may expect to see even more buying interest after recent news about Saudi Arabia. The country is cutting production by 1mn b/d in February and March, on top of its commitments under the Opec+ agreement.

So Brett, let's begin at the source. I think the last time we chatted, Canadian producers were starting to turn a bit of a corner after taking a massive hit when the pandemic began. So what's the latest in Canada?

Brett Holmes: Hi, Alex. Well, I think it's safe to say that Canadian producers have started now to turn that corner. And while there are no guarantees in 2021, there is a rare sense of optimism up here in Canada. So first of all, let's talk about pricing. So Canada's heavy sour benchmark at Hardisty, Western Canadian Select, has been trending down relative to the basis over the last few months.

The differential for WCS in February is actually around a minus $15/bl to the February Nymex WTI CMA last week. This is a departure of nearly $7/bl since October. So at first blush, this may seem bad, but even with a widening discount, we're seeing more favorable conditions for Canadian producers because of the rising tide that is lifting all boats, which are global benchmarks.

The outright price of WCS is on pace to settle at over $37/bl in January, which is almost a 40% gain over the average price in 2020. So rising prices, coupled with Alberta government's decision to effectively end its cap on production, has allowed operators a clear path to increasing output.

The provincial government's curtailment order had been in place for almost two years and caused strife among companies and divided those normally in alignment on policy issues. The latest official numbers from the government show that oil sands producers actually hit a record high in November for production at 3.2mn b/d. This is nearly 700,000 b/d higher than the lows we saw in May.

So, of course, one big driver has been the global demand, and there seems to be more interest at the US Gulf coast that you alluded to earlier. Isn't that right, Alex?

Alex: Yeah, absolutely. And so as many may know, the Argus WCS Houston weighted average assessment, that includes both WCS and Cold Lake barrels in the Houston area, which Argus defines as Nederland, Beaumont, and Enterprise ECHO terminals.

The production cut from Saudi Arabia that I mentioned earlier, that will more than offset a slight easing of Opec+ production restraints. And so we've certainly seen an impact on WCS Houston prices. At the end of last week, February WCS Houston closed at roughly $1.40/bl under the CMA Nymex basis, which is about 45¢/bl stronger against the basis than at the start of the prompt trade month.

So it does seem clear that refiners in the Asia Pacific may look for US Gulf coast exports to help fill this gap. Just last week, India's largest state-controlled refiner, IOC, they were heard purchasing a cargo of WCS to a terminal on the eastern coast of India, and that's between, I guess, March 27th and April 5th. And, you know, we're still confirming some details, but we did hear the tender sought 1mn- or 2mn-bl parcels offered on a delivered basis relative to dated, Brett.

And so WCS was heard to be an eligible option to offer as either a single-grade cargo or as a co-load with other sours, such as Mars, Poseidon, and Southern Green Canyon, among some others. You know, with that in mind, it also looks like recent support we've seen at the Gulf coast is beginning to drive a bigger wedge between Hardisty and Houston prices, and so supporting better arbitrage economics, maybe even crude-by-rail. So, Brett, what are you hearing on that front? We do know that Canada has a history of pipeline congestion. As you noted, production's up.

Brett: So, the vast majority of production will still be exported via pipeline, but yes, producers and their old foe, pipeline congestion, meet again. 2020 was an unusual year, of course, where we saw several months of excess capacity because of the pandemic-induced hit to demand, but that now is in the rear-view mirror.

Despite the midstream bottlenecks appearing and the race for shippers to restart crude-by-rail movements, the demand in the US Gulf coast has been picking up steam for months. This is a market Canadians have been increasingly eager to reach, and crude-by-rail has helped in that pursuit. Crude-by-rail bottomed out at less than 40,000 b/d in July after the pandemic crushed both rail and pipeline economics.

It has, of course, been a long haul, but crude by rail has partially recovered to almost 100,000 b/d on October with shippers facing a Houston-Hardisty spread in the heavy sour market of just $8/bl at the time. This spread has since widened to past $10 in January and now $13/bl in February. 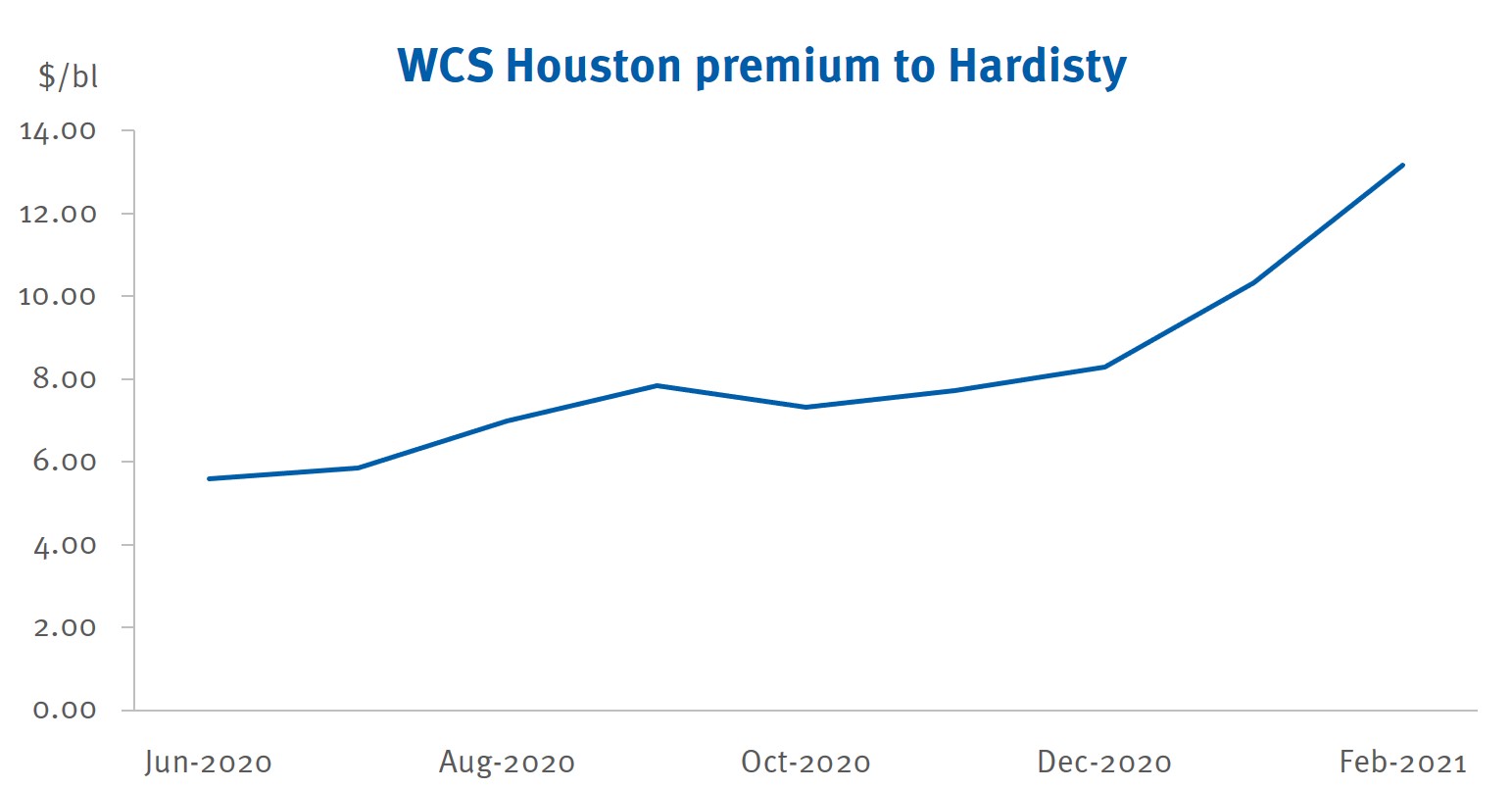 So we last saw a $13 spread in March, 2020, almost a year ago, and at that time, 350,000 b/d was exported via rail, just to give you some perspective. But not only is the wide spread necessary for more shippers, they're also looking for consistency in the prices. So having the rail arm open and close month to month is not desirable and it makes it difficult to make that arbitrage work. So if production continues to be high and pipeline congestion persists, crude by rail can help place some of these barrels, as we've seen in the past.

Alex: Yeah. And I'll also point out while the news from Saudi Arabia is a very recent development, we've been tracking this trend for a bit of time now. In fact, just back in November, we heard about a couple of cargoes of Cold Lake loading at the Gulf coast. So one was a VLCC destined for China, while the other was a Suezmax headed for India, we believe. So that would total, you know, 3.1mn bls leaving the US Gulf coast during the December load month.

And as we've seen, more water-borne demand materialized. We've also seen increased liquidity in the domestic pipeline market. So in fact, Cold Lake and WCS Houston combined trade volumes totaled just shy of 230,000 b/d during the January trade month, which is up by about 6,000 b/d from the December trade month. It's possible that this export demand may also drive higher competition domestically with asphalt-buying season and the spring just around the corner.

But despite firming prices in the US, delivered WCS prices in China and Singapore are looking competitive against some similar grades. So for example, WCS is averaging a delivered February discount of about $2.50 cents against Basrah Heavy in China. And the Canadian heavy's grade is also averaging roughly $2.65 less than Basrah Heavy for February delivery in Singapore, as of last week's market close. 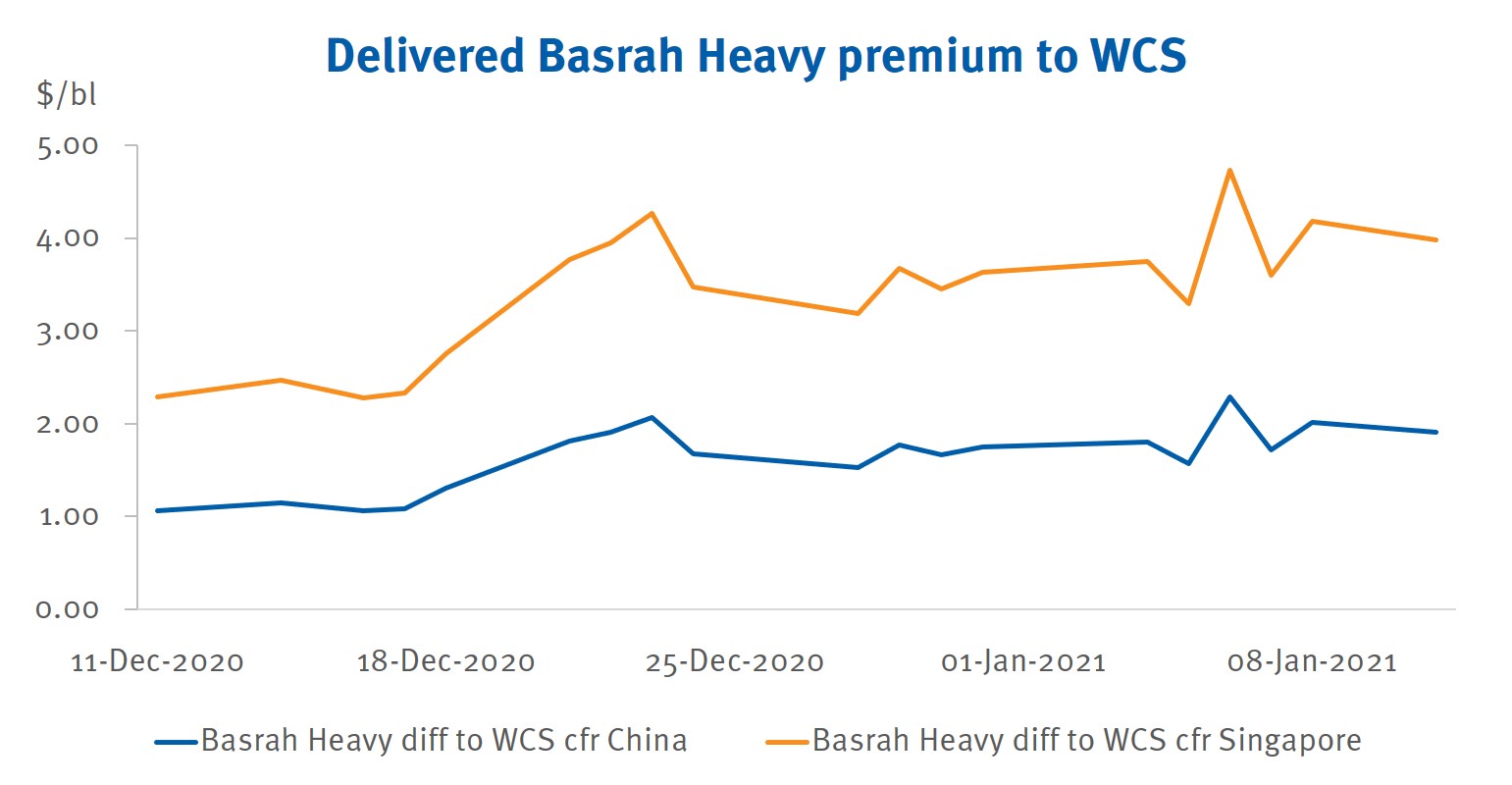 Alex: So early indicators suggest that with international demand driving competitive WCS pricing at the coast and a growing production in Canada insulating prices in Hardisty, we might expect more substantial rail supply this year. Brett, do you think there's anything else that we need to watch for?

Brett: Yeah, so Alex, I think one sort of big takeaway is that Canada is getting back to its old ways, for better or for worse. We have strong production-type pipelines, crude-by-rail activity, and most producers are looking forward to more connectivity to international markets with Enbridge's Line 3 Replacement Project, which should be online later this year, along with Trans Mountain expansion to the West coast.

So even with prices relatively low compared to pre-pandemic levels, producers here are hitting record levels of output. And this, to me, highlights just how resilient Canada's oil patch is in challenging times. As we talked about last time, it's not their first rodeo having a massive downturn. So after years of headaches, including many downturns, many see Canadian producers well-positioned to take advantage of this rebound here in 2021.

Alex: Well, Brett, thanks for your insight. I know that we'll continue to track this trend and we'll provide continued analysis on the Canada-to-Texas arbitrage economics.

Brett: Sure thing, glad to chat about it.

Alex: And listeners, if you're in need of more in-depth daily coverage of the US and Canadian crude oil markets, consider subscribing to Argus Americas Crude. You can find information on this service at www.argusmedia.com. Thanks for tuning in, and we look forward to you joining us on the next episode of The Crude Report.

Locational WTI spreads are tightening across the US Gulf coast as new connectivity options boost total liquidity, ultimately paving the pathway for Argus AGS to succeed as a future benchmark for light sweet crude in global markets.

Covid-19 continues to wreak havoc, as three Asian refineries are on the brink of shuttering thanks to weakened refined product demand.

The Crude Report: The effects of Opec+, vaccines and piracy on WAF markets