The last couple of years have increasingly seen hydrogen, which had so far taken the backseat in energy transition narrative compared with other options, suddenly being trumpeted as the missing link for reaching carbon neutrality. Although the energy world has gone through previous phases of excitement about hydrogen, the current cycle is attracting an unprecedented amount of interest.

Along with hydrogen, the search for suitable hydrogen carriers shone a spotlight on ammonia — a product that until recently was relegated to the backwaters of the commodity world — given that it is being touted as a competitive option as a hydrogen carrier. Green ammonia produced by renewable sources is receiving significant exposure as a potential alternative fuel on major media outlets and is explicitly featured in several governments’ long-term energy plans, more recently in Japan’s 2050 net-zero emissions plan.

Despite the hype, questions about the viability of a hydrogen economy abound, especially on the scale envisaged by optimistic government roadmaps and by the most ambitious projects in this sector. Multi-billion dollar projects are emerging that claim the future ability to upend current energy patterns.

But they are currently based on technologies that are yet unable to support green hydrogen production at competitive costs compared with competing energy sources, and at the same time are planning to address a purely hypothetical future demand. It must be also noted that alternative technologies in some of hydrogen’s potential end uses, in particular electric vehicle technology in the transportation sector, have also become increasingly competitive, further complicating hydrogen’s market penetration potential.

Much-needed government support to kick-start this market in most cases only exists on paper, with almost all regulatory frameworks needed by the prospective hydrogen market perhaps years away from being implemented. These include subsidies, regulations and certifications and transparent carbon credits markets, both mandatory and voluntary.

Regulations will be needed to avoid carbon leakage, which is likely if “brown” ammonia that emits carbon is used as an interim solution as a fuel in sectors such as shipping and power generation.

Certifications will be needed to avoid dubious green credentials and provide a definition for truly green hydrogen and ammonia. Without direct subsidies, an efficient carbon market will be essential for the financial viability of most green hydrogen projects given the expected production costs of this technology compared with incumbent energy sources.

It is a case of a market that won’t exist without investment, and investment that won’t materialise without a market. But the sheer size of planned investments and the pledges made by several key developed economies is suggesting that the wheels of the hydrogen economy are certainly in motion.

There is increasing awareness that hydrogen might indeed become an important instrument on the path towards decarbonisation. In this context, once all the technological, financial, and regulatory drivers are in place it is not unreasonable to expect hydrogen to become gradually more competitive and to gain a growing share of the downstream market, with ammonia possibly playing a role in the hydrogen supply chain.

Together with hydrogen, interest in green ammonia as a hydrogen carrier also boomed in 2020, especially for export-oriented investments. In this review of the green hydrogen/ammonia market, we present our green ammonia project tracker, which currently includes around 20 projects globally with a total potential capacity of over 15mn t/yr. The Asian Renewable Energy Hub (AREH) in Australia alone accounts for almost 10mn t/yr. 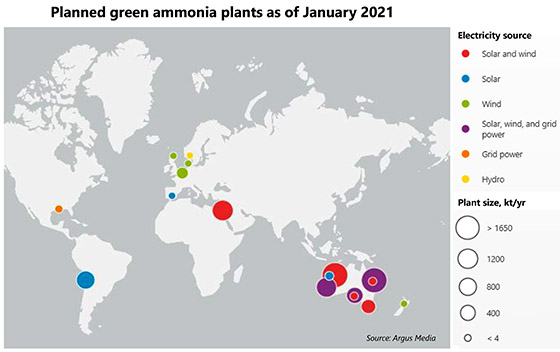 The projects under review include both pilot plants with capacity below 100,000 t/yr, as well as mega-projects with capacity over 1mn t/yr. Although almost none of these projects have reached final investment decision stage yet, with the largest projects’ intended start-up date is 2025 and beyond, typically with a phased approach.

The projects are that are targeting green ammonia as a downstream product of hydrogen are so far focused on four regions — Australia, the Middle East, Chile and Europe. This is because of the convergence of existing renewables experience with an area of substantial nitrogen and/or hydrogen demand, or the potential for hydrogen/ammonia exports.

Saudi Arabia and Australia are targeting export markets of Europe and Japan respectively. Europe faces a net-zero carbon mandate with aggressive targets by 2030 and 2050 that aims to remove methane as a fuel for heating and power generation, as well as its use as a feedstock. Chile combines stranded solar generation potential and an existing sink for ammonia used for explosives production.

The most ambitious of these projects is the Neom project in Saudi Arabia in which $5bn is being invested in around 1.2mn t/yr of green ammonia production, as well as Australia’s AREH. They both include new investment in GW-scale solar and wind generation, the corresponding electrolysis capacity, as well as ammonia synthesis.

This investment model can definitively be called “green” ammonia as it does not face any issues of ‘additionality’ — the impact caused by linking a new electrolyser with a significant power requirement to existing renewable generation capacity, which could cause an increase in net carbon emissions if the resulting additional peak or base-load power requirements are covered by fossil fuels.

Despite the boom in project announcements in 2020, it is too early to predict the extent of ammonia’s role in the potential future hydrogen supply chain. It is safe to assume that not all of these projects will succeed. The race for financing will be won through a combination of favourable regulatory frameworks, competitive project economics and clear pathways to downstream demand.

Argus Consulting, thanks to its comprehensive expertise in energy, alternative fuels and fertilizers, is at the forefront of the development of this market and can assist a variety of stakeholders, from government entities to project developers and financial institutions.

Argus Consulting
Download the brochure to read more about our case studies and reach out to consultants at this page.
Sign up

Conscious uncoupling: The UK leaves the EU’s IEM during a supply crunch

Listen in as industry experts explore the viability of methanol as a fuel of the future in this latest episode in our marine fuels series.