Decarbonising the road transport sector will be a crucial element in solving the issue of climate change and mitigating against rising global temperatures.

Road transport accounts for approximately 15pc of global carbon emissions, making it the single largest source of carbon dioxide by sector. The attention surrounding decarbonising road transport perhaps then should come as no surprise.

Electric vehicles (EVs), hydrogen fuel cell electric vehicles (FCEVs) and biofuels are all hot topics. For many countries, a combination of these technologies lies at the heart of their decarbonisation strategy. Slowly but steadily, we are beginning to see alternative fuels taking a greater market share of overall road transport fuel consumption.

EVs over the past decade have emerged as the frontrunner as the alternative to conventional internal combustion engine (ICE) vehicles. In 2020 there were an estimated 11mn electric passenger cars on the road globally, double the number from two years previously. This includes both battery EVs as well as plug-in hybrid EVs.

Argus Consulting forecasts that by 2030 there will be more than 100mn electric cars on the road. This rapid uptake is being driven by carbon neutrality targets. Since EVs are a proven technology, several countries have set bans on the sales of ICE vehicles as a sure-fire way of meeting their overall carbon target. 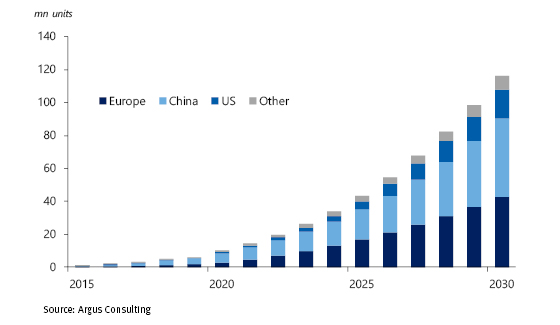 Norway leads the world in EV penetration with ICE vehicle sales to be banned as early as 2025, while several other European countries have committed to follow by the end of the decade. Similar announcements are beginning to be made outside of Europe.

One of Joe Biden’s first executive orders as US president was to request all federal vehicles to be zero emissions. Several US states have unilaterally set bans on private ICE vehicle sales, while there are calls for Biden to extend this to the entire nation.

China currently has more EVs on the road than any other country but is still deciding on a timetable on which to ban ICE vehicle sales altogether. But an ICE ban looks inevitable given its carbon neutrality by 2060 target.

The ability of countries to set targets for banning conventional fossil fuel cars is no doubt because of the momentum behind EVs. While sticker or retail prices remain more expensive than conventional ICE vehicles on the whole, EVs have become increasingly cost competitive underpinned by a steady fall in battery prices. Battery costs saw a sixfold fall Between 2010-19.

Further cost reductions are required for true price parity between ICE vehicles and EVs to become established, but it looks increasingly likely that this will occur this decade. Government subsidies in the meantime will be important to overcome the barrier that higher sticker prices provide.

But lifetime cost of ownership, i.e. the combined cost of buying, maintaining and refuelling a vehicle, of EVs is already at parity, if not slightly below, that of ICE vehicles given the relative cheaper cost of electricity compared with gasoline and diesel. 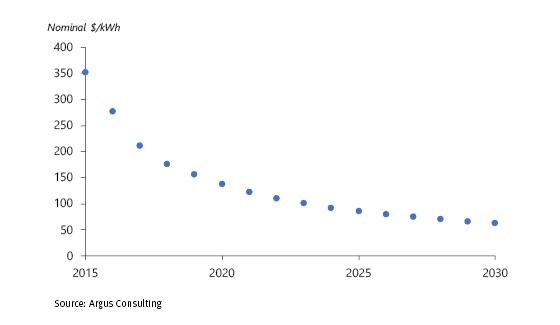 But there are several challenges associated with owning an EV. Perhaps the two most key barriers to overcome are prolonged charging times and low range. Both issues are progressively improving over time.

The advent of fast charging has cut the charge time of an EV down from hours to minutes, while new battery chemistries are being developed that could further extend the range of EVs.

If progress in solving either of these issues stalls, hydrogen could prove a worthwhile alternative as a zero-emissions vehicle. FCEVs have charging and range characteristics that greatly improve on current EVs and are more akin to ICE vehicles.

Despite this very clear advantage that FCEVs hold over EVs, their penetration into the marketplace has been slower by about three orders or magnitude. While EVs on the road number close to 10 million, the latest estimate for global FCEVs is just around 20,000.

The simple reason for this is price. FCEVs have not enjoyed the same price falls as has been the case for EVs. Buying a FCEV currently costs almost twice as much as an EV. But this is to some extent a function of the small production volumes currently in the market.

But with manufacturers such as Hyundai and Toyota committing to producing FCEVs moving forward, we could well see FCEVs prices start to converge with EV prices over the coming decade.

Argus Consulting forecasts that the total cost of ownership for a FCEV will fall to close parity with EVs in the future within the passenger car segment, provided manufacturing volumes increase providing economies of scale.

But the outlook for buses and for heavy goods vehicles (HGVs) is even more promising, with total cost of ownership expected to fall to below that of EVs. In these two segments hydrogen has the advantage for two reasons. 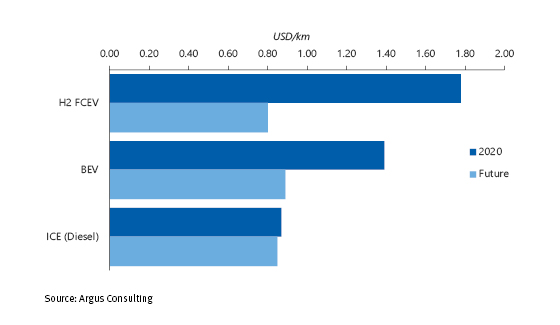 Decarbonising the road sector will be crucial in meeting carbon neutrality targets. It is clear that increasing EV penetration will form the backbone of the transition to zero-emissions vehicles, certainly within the passenger car segment.

What is less clear is the role that hydrogen will play, but given the drawbacks associated with batteries, there is scope for alternatives to EVs to emerge. Further questions remain for both EVs and FCEVs with regards to infrastructure, sources of renewable electricity and hydrogen, as well as safety.

It will be fascinating to observe how this massive shift evolves.

Argus’ consulting team is well placed to research and advise on the possibility of extending hydrogen use and alternative road transport fuels.
Click here to contact us to find out more details or how this trend will affect your company

Environmental Market Insights: Legislative impacts on RECs at the federal and state level

This fourth and final episode will discuss updates in environmental market programs at the federal and state level.

Driving Discussions: New pricing solutions for the transition to E10 in Europe

Learn about Europe's transition to E10 fuel in this latest episode of the Driving Discussions series.