The blockage of one of the world’s most vital shipping lanes caused headlines around the globe, and considerable concern in a number of commodities markets.

At around six days, the blockage was not long enough to fundamentally affect the freight market, or have a lasting impact on commodity prices. But it gave a clear sign of the importance of the canal, and the significant impact that a longer blockage may have had:


1. The queue of vessels built up very quickly, with many ships unwilling to divert

By the morning of 29 March, six days after the Ever Given ran aground, the queue of vessels waiting to transit the Suez Canal had grown to 367, according to shipping agent Leth Agencies. This included 35 crude tankers, 14 product tankers, 98 bulk carriers, 26 chemical tankers, 16 LNG vessels and 10 LPG carriers.

Bypassing the canal adds considerable time to certain journeys, and a difference in cost that will vary depending upon the starting point. A journey from the Black Sea port of Novorossiysk to east Asia via the Cape of Good Hope would be more than 7,000 nautical miles (nm) further — and take around 20 days longer at 14 knots — than a journey through the canal, according to oil analytics firm Vortexa.

For a Suezmax vessel, an additional 20 days voyage at 14 knots would amount to around $360,000 in bunker fuel costs alone, based on the current price of 0.5pc sulphur bunker fuel dob Rotterdam. The additional hire days for the vessel would also be factored into the cost, leading to higher costs even accounting for the absence of canal tolls, which can exceed $300,000 for laden Suezmax vessels.

At least two tankers did appear to route away from the Suez Canal, but many continued to arrive during the weekend as the Ever Given remained stuck. 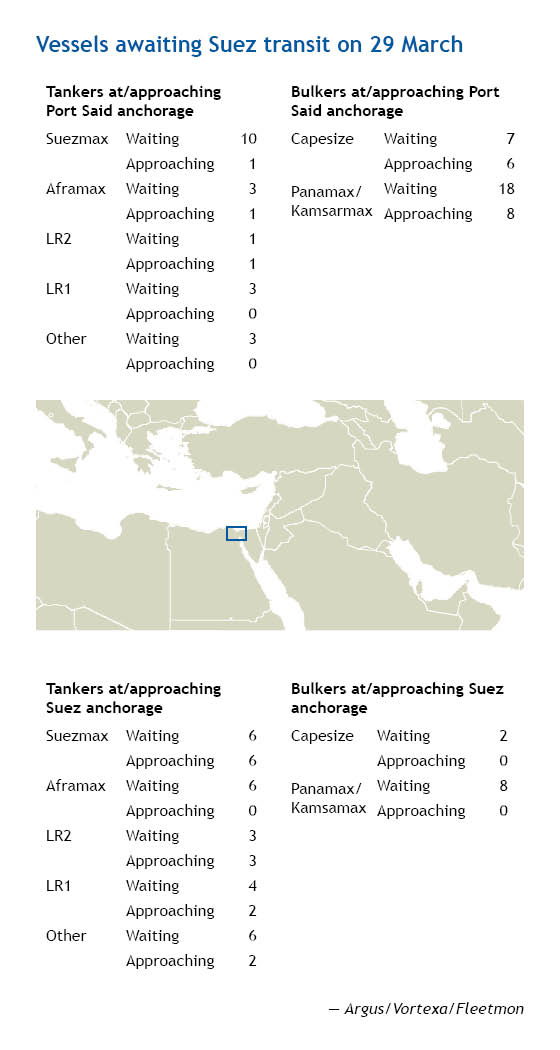 2. Congestion will take time to clear

Shipping agencies estimate that it could take up to a week to clear the backlog of vessels that has built up and return to normal operations. The maximum capacity of the canal has rarely, if ever, been tested, according to local shipping agents, but is estimated at 70-100 vessels per day in total (northbound and southbound combined).

The Suez Canal Authority will be expected to implement special measures to clear congestion, but with new ships arriving all the time to transit the canal, clearing a backlog of more than 350 ships will take considerable effort and time. One shipping agent estimated that it will take 5-7 days for operations to return to normal.

European Suezmax rates rose by 20-25pc in the week of the Ever Given accident. The majority of crude oil that travels through the Suez Canal is carried on Suezmax vessels, and the canal is a vital artery for ships travelling back to the European market to load. Six Suezmaxes were in the queue of vessels waiting to transit the canal northbound on 29 March, with another six approaching the Suez anchorage. And 11 vessels were at the Port Said anchorage waiting to travel southbound.

Rates may have climbed further but for the negative impact that reduced Libyan output and the Covid-19 pandemic have had on Suezmax demand in recent months — Suezmax loadings in the Black Sea and Mediterranean were 40pc lower in 2020 than in 2019, at 379.94mn bl. This meant fewer fixtures were in need of prompt replacement ships. This turned out to be a good thing for charterers, as 10 of the 21 Suezmaxes listed as available to load in the Mediterranean by 10-20 April — the period on which most charterers were focussing — still needed to travel to Europe via the canal. Vessels could potentially have been brought in from other markets, although this would have taken time.

The blockage also occurred at a time when the standard fixing window for Suezmaxes from Europe happened to be slightly further forward than usual. This gave charterers more time to wait for further developments before committing to higher rates.

The naphtha east-west spread — the difference between delivered naphtha cargo prices in Japan and northwest Europe — initially had little reaction early in the week when the Suez Canal was first blocked. But on Friday the spread widened by more than 20pc to $20/t, when it appeared that the Ever Given would need to be lightened before being freed, which would have closed the Suez Canal for several weeks. This was the widest the spread has been since November 2020. Once the vessel was freed, the spread fell back to its previous level.

The wider spread reflected higher freight rates for LR tankers to carry naphtha to east Asia. At least two charterers secured ships at $2.45mn between the Mediterranean and Japan for naphtha cargoes on Friday — $375,000 higher than the prior level of $2.075mn. The bookings reportedly included options to sail via the Cape of Good Hope instead of the Suez Canal and/or clauses to allow shipowners to claim any costs associated with Suez Canal waiting time.

As well as higher costs for the longer voyage option, charterers were paying for security of vessel supply, with concern that ships travelling into Europe via the Suez Canal could be delayed, making those ships much less attractive as options. European LR supply relies on ships coming northwards through the Suez Canal for replenishment. Six LR1 vessels and six LR2s were waiting to transit Suez northbound when the canal reopened on Monday 29. On Wednesday 24 March, ahead of Friday’s jump in the market, 18 LR2s were available in Europe to load by 14 April, when the cargoes were scheduled to load. But three of those were positioned east of Suez and needed to travel through the canal to load in the Mediterranean.

All of the five LR tankers at or approaching the Port Said anchorage to sail southbound when the canal reopened were carrying naphtha, with four listed to go to east Asia. Had the blockage continued, Asian buyers may have looked to source more volumes from the Mideast Gulf, although this is no longer necessary as the ships are now likely to pass the Mideast Gulf before any replacement cargo would be loaded.

Most of the clean tankers that were delayed travelling northbound through the Suez were LRs carrying diesel to Europe from the Mideast Gulf. The delays had little impact on European diesel prices, as they were offset by high stocks and weak demand. The loss of the tankers themselves to the European market may have had more of an impact. 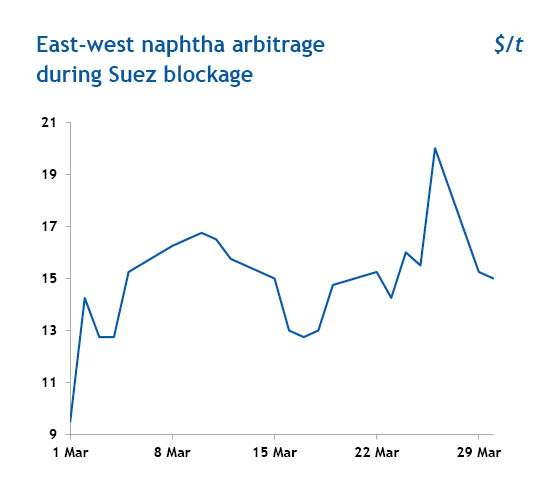 The closure of the Suez Canal had little-to-no impact on global Capesize or Panamax rates, despite 38 such vessels having joined the queue to transit the canal by 29 March, with another 17 past Malta on the way to the Port Said anchorage.

The list of ships waiting to transit on Monday shows that most of the Capesize and Panamax bulkers to use the canal travel southbound, with coal, iron ore or grain cargoes from the east coast of North America, northern Europe or the Black Sea area. Some cargoes, particularly out of the Black Sea area, were reportedly delayed while charterers waited to assess the scale of the blockage.

These are important routes, and there may have been some localised impact on freight rates, but the global Capesize and Panamax markets are more likely to be driven by the high-volume routes across the Pacific, or long-duration grain and iron ore shipments from the east coast of South America to China.

Ships travelling from North America to China would take around nine days longer to travel round the Cape of Good Hope, rather than via the Suez Canal, incurring additional hire costs and burning additional fuel (around 190t for Panamax vessels and a little under 400t for Capesize ships). Recent high time-charter rates in the Panamax market, with bookings at more than $20,000/day for voyages from the US Gulf or US east coast to China, make it considerably more economical to travel via the Suez Canal, even accounting for canal tariffs that can exceed $200,000 for Panamaxes and $300,000 for Capesize vessels.

Cargoes from the Black Sea to Asia, which include iron ore and grain from Yuzhny and coal from Taman, would have faced the largest impact if delays had been sustained. The diversion via the Cape of Good Hope from the Black Sea adds more than 20 days of sailing time, compared with travelling via the canal. This would have inevitably led to higher freight rates and made certain trades more expensive or unviable. But the delay was too short for this impact to be realised in any of the commodity markets.

The Weight of Freight
In this series, our global team of experts explore the intricate and powerful connections between the shipping and commodities markets. Access the latest thought leadership and industry insight on the rapidly evolving freight markets.
See more