High oil prices aren’t just hitting the pocketbooks of drivers, but are straining the finances of oil consumers across the supply chain — including oil tanker operators who foot the bill for fueling vessels that carry crude from one port to another.

Prices for oil-based bunkers, which constitute the vast majority of the merchant marine fleet’s fuel supply, move largely in tandem with crude oil prices, which for Houston fob crude prices matched a three-year high of $84.50/bl in November. Continuing crude production constraints from Opec+ and rebounding global oil demand are the major culprits behind the gains. 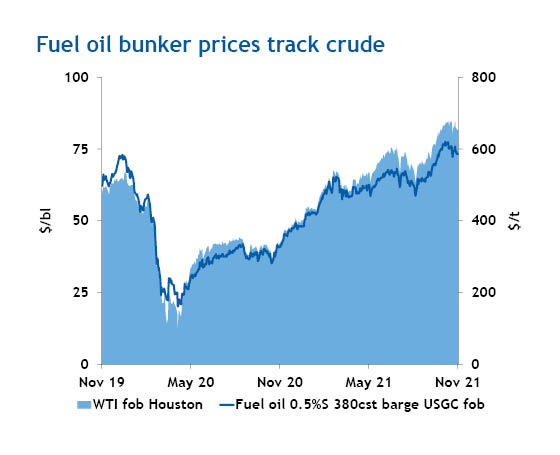 The fuel costs are taking up an increasingly large share of the rates that charterers pay to transport the millions of barrels of oil on the high seas each day. To use an example, the bunker component for 2mn bl very large crude carriers (VLCCs) on the US Gulf coast-China route reached 33pc of the 15 November freight rate of $5.7mn, compared with 16pc of roughly the same freight rate on 6 July 2020. 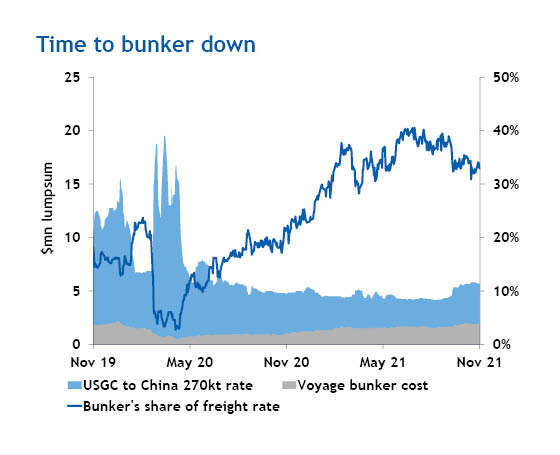 Another sign of the larger role bunkers are playing in the tanker market comes from the Worldscale Association, a producer of annually updated oil tanker rates, which is raising the low sulfur fuel oil bunker component for its 2022 flat rates by 16pc to $479.95/t.

But higher bunker prices are not the only reason marine fuels are taking up a larger share of freight rates. One reason that tanker rates are low, having neared historically low levels this past summer, is that global demand for oil and its transport has yet to return to pre-pandemic levels, while tanker supply has continued to expand.

This slack in tanker supply has spurred stiff competition among tanker operators for cargoes, making it difficult for operators to pass these rising fuel costs onto charterers.

Just as taxi drivers face thinner margins from higher gasoline prices unless they increase their fares, tanker operators are earning less on their similarly-priced voyages than they were earlier in the year when bunker costs were lower.

In a quarterly earnings presentation crude tanker owner Teekay Tankers pointed to “high bunker costs” as a factor pressuring its spot time charter equivalent (TCE) rates. The same has held true for clean tanker operators. On 15 November, TCE spot earnings on the Mideast Gulf-Japan 75,000t route were $8,161/d, down by 44pc from 12 April, both against a chartering rate of $24.09/t, according to Argus figures.

The increase in bunker prices accounts for that difference. In that time frame, the price of low sulfur fuel oil at Fujairah, UAE, climbed by 33pc to roughly $625/t, a price increase that tanker owners had to swallow.

But on other routes tanker operators have managed to offset higher bunker costs by raising freight rates.

Crude tanker operators successfully capitalized on reduced tonnage supply to push the US Gulf coast-China VLCC rate up by 31pc to $5.7mn lump sum, or $21.11/t, from 12 April to 15 November, more than offsetting the 24pc rise in Houston low sulfur fuel oil bunker prices. TCE earnings for VLCCs on a similar route doubled to roughly $48,000/d in that time period, according to shipbroker estimates.

For the vast majority of tanker owners, there is little choice of what type of fuel to buy for a journey. But existing or impending marine emissions regulations have started a diversification of the types of fuel a tanker operator can burn. More than 10pc of the ships on order, some of them tankers, will be equipped to burn non-oil-based fuel, but the current tanker fleet is overwhelmingly run on petroleum-based fuel.

Some newer tankers are burning LNG. In October, the AET-owned Aframax Pacific Ruby bunkered with 600t LNG off the coast of Florida on its way to deliver a US crude cargo to Rotterdam. Recent gains in LNG prices, which have climbed faster than fuel oil bunkers, have weakened the economics for using the alternative ship fuel. But if and when LNG prices do fall relative to fuel oil bunkers, then burning LNG may expand tanker operator earnings. Tanker owner International Seaways, which has three LNG bunker-capable VLCCs on order, expects the price of LNG bunkers to fall back to a historical discount to low sulfur fuel oil, which will allow the company to capitalize on the fuel arbitrage. 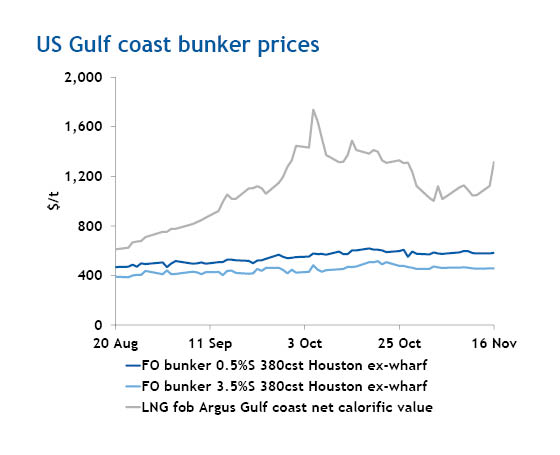 Euronav, another tanker operator, successfully completed a two-week test of burning 360t of B30 biofuel on one of its Suezmax tankers, the Statia, en route to Angola in September. The shipowner said the use of the fuel showed “no significant differences in operations”.

The most common alternative to standard low sulfur fuel oil is cheaper high sulfur fuel oil, available only to ship operators with scrubber-fitted vessels in their fleets.

While fuel diversification for tanker operators remains in its nascent phase, most tanker owners will be beholden to the whims of the oil market for its bunker prices. But that doesn’t mean tanker owners will always be paying that bunker premium. Depending on the relative tanker supply and demand in a region, a shipowner may be able to pass that cost onto the charterer. But sometimes he may have to swallow it.

The dry bulk market has experienced a record-breaking year in terms of freight rates across the Pacific and Atlantic basins. The resurgence of economies post-pandemic, an increase in Chinese commodity demand and vessel supply inefficiencies have all underpinned strong r...

US Gulf clean product exports have remained slow in the wake of Hurricane Ida, keeping MR tanker rates across the Atlantic basin under pressure, despite solid volumes flowing from Europe to the US.