Crude benchmark prices skyrocket above $80/bl and the US restarts trade talks with China. Meanwhile, US crude exports bounce back above 3mn b/d.

There is no hotter topic in the oil market than Nymex WTI above $80/bl. Except maybe Ice Brent above $85/bl. The two global benchmarks are recording multi-year highs on worries about a supply crunch with winter on the horizon.

A three-year low in inventory levels at the Cushing, Oklahoma, storage hub in the US has helped push prompt WTI prices relative to month-two Ice Brent back to a discount narrower than $1/bl — ultimately deteriorating the arbitrage to export crude by the second half of the November trade month. 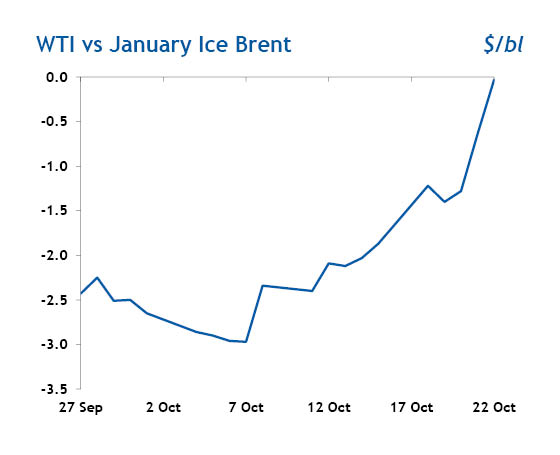 Yet, the White House has once again begun tackling trade talks with China, and both sides have their eyes on specific goals.

China's vice premier Liu He asked for the removal of tariffs and economic sanctions imposed by the US in recent years in his 8 October conversation with US trade representative Katherine Tai. The US official, in turn, asked for China to fully implement an interim deal signed last year that, among other issues, required China to buy $69bn worth of US crude, LNG and other energy commodities in 2020-21. We will keep an eye on the continuing discussions and whether US crude exports to China pick up as a result.

US monthly crude export data continues to have one major theme: volatility. Once again, prices bounced back above 3mn b/d in August, rising by 14pc from the previous month, according to the latest trade data by the US Census Bureau.

That was fast. Enbridge has already completed a deal to buy Moda Midstream Operating and its huge export terminal near Corpus Christi, Texas. The $3bn cash sale closed on 12 October, about a month after the Canadian midstream giant announced it. The terminal, built in 2018, includes 15.6mn bl of storage capacity, and can partially load very large crude carriers (VLCCs).

Most news stories have focused on the key export terminal, but the deal also includes other valuable assets, including a 20pc stake in the 670,000 b/d Cactus 2 crude pipeline which carries Permian crude to Corpus Christi.

Enbridge appears to be quite serious about the US Gulf coast. The company also has an option to buy into Enterprise's planned Sea Port Oil Terminal (SPOT) off the coast of Freeport, Texas, which will be able to fully load VLCCs.

Some of the largest US midstream players will release earnings the first week of November including Enterprise, NuStar Energy, and Magellan.

In the meantime, we expect to see higher-than-average exports out of Houston terminals in the coming weeks as regional cargo prices fetch 10-25¢/bl discounts compared to Corpus Christi exports. WTI exports out of Houston averaged roughly 330,000 b/d in the first three weeks of October, up by more than 50pc compared to an average 215,000 b/d over the same period in September, according to preliminary data from Vortexa.

At the same time, Corpus Christi exported an estimated 1.26mn b/d, down about 15pc compared with an average 1.49mn b/d over the same period of September.

The US Crude Export Chronicles: September 2021