Prices for May eased from April as inventories rose in Rotterdam, with an inflow of non-Russian product compensating in part for the drawing down of Russian inventory in northwest European storage facilities. Stable domestic European methanol production has brought confidence in supply availability, sources said.

Demand is stable in Europe, but participants in several downstream sectors remain concerned about consumer spending habits in relation to inflation. The relaxation of Covid-19 restrictions in several countries in Europe may switch some spending away from goods and towards the tourism and service industries, a consumer said this week.

Argus began to publish a monthly European methanol CP in February, when the March CP was assessed at €495/t (see chart). Methanol CPs in Europe are typically agreed on a quarterly basis, but several participants on the vendor and consumer side have begun to discuss monthly contracts, which can be renegotiated every four weeks to reflect changing market fundamentals.

The US and Asia-Pacific methanol markets have monthly pricing. 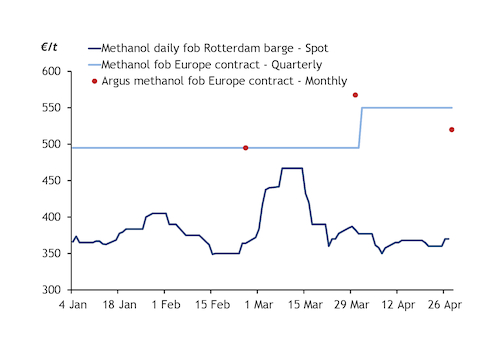