The extreme hot and dry weather across large parts of Europe this summer is having wide-ranging effects across the power sector — increasing the challenges already faced in diversifying away from Russian fuels while attempting to adhere to climate goals.

Summer in Europe this year has been characterised by extreme heat and drought conditions across large parts of the continent. Naturally, hydropower reservoirs have reached multi-year or even record lows, in particular in Mediterranean countries. But the impact of such extreme weather stretches beyond hydro, posing problems for thermal power plants in a less obvious manner. 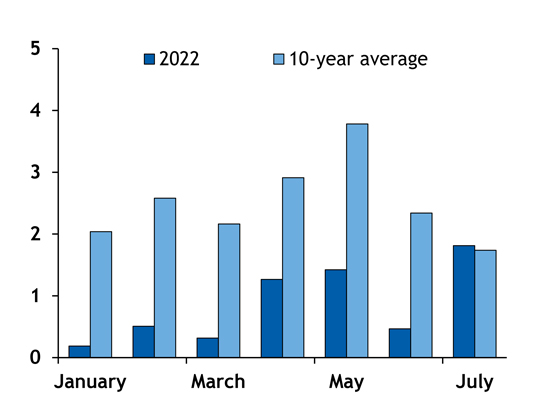 The most alarming case has been in France, where a series of heatwaves has increased river and basin temperatures to abnormal levels, forcing French utility EdF to curb nuclear output already since May. Nuclear plants take water from rivers and the sea for cooling purposes, which is returned to the natural environment at a higher temperature. But France temporarily had to relax the maximum acceptable temperature of discharged water to allow plants to operate in the extreme heat. 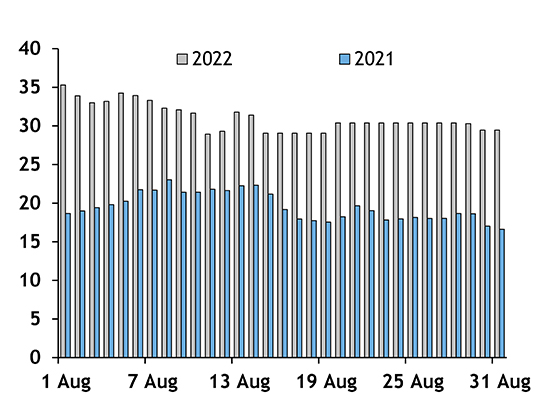 Over the past 20 years, EdF attributed less than 1pc of nuclear generation losses to high river temperatures and low river flows, but with daily high temperatures in Paris having surpassed 40°C in mid-July — almost 15°C higher than historical norms — 2022 could be different. Cooling-related capacity constraints at the 1.3GW Golfech 2 and two 910MW reactors at Blayais and Bugey have been one of EdF’s main problems with nuclear generation this year, which is down by 15pc from last year and whose 2022 target has already been revised down three times. And nearby in Slovenia, low levels on the Sava river are threatening output cuts at the Krsko nuclear plant. Gas-fired power plants face the same problem, with France's 930MW Martigues Ponteau plant recently reducing output to avoid surpassing the 30°C water discharge limit.

In Italy, the most intense drought in 70 years has cut water flow on the Po river — Italy’s largest — to just 170 m³/s at the Ferrara checkpoint, while the previous record low was 237 m³/s in 2006. Without sufficient cooling water, some local gas-fired plants had no alternative but to stop generating. Italian utility A2A has stopped the 774MW unit 4 at its Sermide gas-fired plant until October, following several disruptions since June, while EP Produzione shut down a 750MW gas-fired unit for nine days in late July. Enel has faced ongoing difficulties operating its 1.5GW gas-fired plant at La Casella and has been using external pumps to ensure the cooling of its units.

Such plants serve the Italian grid twofold— they supply the energy-intensive north power zone, while Sermide and La Casella are part of Italy's capacity market, a mechanism aimed at guaranteeing dispatchable capacity during peak demand periods.

The severe weather conditions, combined with cuts to gas supply from Russia, has provided an unexpected resurgence for coal-fired power, which looks likely to continue in the short term at least and raises questions on attaining climate goals.

Italian coal burn rose to a three-year high at nearly 3GW in July, almost double the level from a year ago. Italian energy regulator Arera confirmed three coal-fired plants — more than half of the country’s coal capacity — as “essential capacity for the security of the electricity system”, allowing them to operate freely in the market until 2024.

In Germany, the extreme weather conditions are stifling power generation in a different way, as low water levels on the Rhine river limit coal transportation. The German government is also considering coal as an immediate alternative to mitigate the dependency on Russian gas and approved an ordinance to allow more than 4GW of coal-fired plants in the grid reserve to return to the market for a limited period. Hot weather, low wind power and regional power shortfalls in the short term serve to exacerbate the situation, keeping wholesale power prices into the near future at record highs.

The synergy of climate and energy crises is testing nerves beyond energy markets. The EU Commission revised down this year’s expected economic growth to 2.7pc, from a 4pc outlook at the end of last year. And greenhouse emissions show no sign of abating in the short term, after already rising by 6.3pc last year. National coal phase-out deadlines are being reconsidered, and emissions limits are being relaxed under emergency measures to safeguard energy supply security in winter. In Italy, the government is looking to invest about €2.9bn to develop artificial basins and waterworks, while the European drought observatory has applied its most critical status to regions of France and Italy, while parts of Germany are placed under alert. While the extreme summer has heated up prices and policy reform in European energy markets, the current outlook suggests winter is unlikely to have much of a cooling effect.

Argus European Electricity service is a single source for all the price data and market intelligence required to manage spot and term pricing, risk analysis and strategic planning.

Extremely high wholesale power prices in Europe are forcing discussion on whether market structure and price formation should be reformed — leaving market participants to operate in a climate of long-term uncertainty.

Net Zero Transition podcasts are back!