Russia’s invasion of Ukraine is redefining the global seaborne trade in crude oil. The impact on freight has not only been longer voyages and more tonne-miles but greater volatility as Europe instead draws on west Africa and the Mideast Gulf for its supplies, while Russia seeks alternative markets in Asia.

The full implementation of the EU’s new sanctions regime at the end of this year, which will end seaborne imports of Russian crude to Europe, can only accelerate these developments and cement the fundamental changes in trade flows and the freight market.

Since the start of the conflict, Russia has increased total exports of its flagship Urals grade from the Baltic and Black Sea by about 2mn t from January-March, to almost 9mn t in April-June, as the country focuses on boosting exports to markets outside of its traditional European and North American buyers.

With less oil being sent by pipeline to Europe, some Russian refiners have cut runs to avoid stressing storage capacity, and the oil is now instead being exported by sea, leading to record-high levels of Russian material in-transit.

A considerable volume of Russia’s monthly crude production is still destined for Europe. Exports of Urals crude to Europe have fallen but the grade still accounts for a significant percentage of European imports. 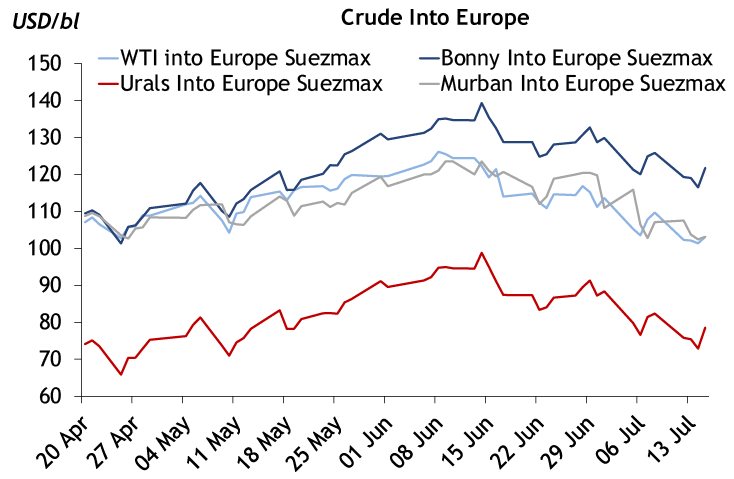 Most of this was accounted for by term contracts agreed before the Russia-Ukraine conflict started and flows to refineries in Europe operated by Russian companies, such as Lukoil’s ISAB refinery in Sicily. But some spot deals still concluded. This could lead to a further evolution of crude tanker trading patterns once the EU ban takes effect, as European refiners look to other countries to replace their Urals supplies.

The two most viable alternatives for the remaining Urals are India and China.

Before the conflict, India’s share of Urals exports was negligible but in April-May, Russian exports to the country rose to more than 30pc. Loadings of Urals crude for India surged to 850,000 b/d by May, from less than 40,000 b/d in February, despite a call by the US in April for India to “stop accelerating” Russian oil imports. Most Indian state-controlled refineries operated at maximum rates in June because of strong transport fuel demand and access to cheap Russian crude. But this raises the question of how much more Russian oil India can take, given the country’s capacity constraints.

With India being the main outlet for rising Russian exports and its refiners already at full capacity, Russia will be forced to look for other buyers and may struggle, despite significant discounts on the price of Urals. According to shipbroker BRS, Russian Urals crude was trading at discounts of $26/bbl, $24/bbl and $20/bbl against Brent, WTI and Dubai, respectively.

Russia’s other key export option may be China, which has also taken more Urals following the start of the invasion. In May, Chinese imports of Russian crude rose dramatically, with seaborne Urals deliveries accounting for most of this increase. These imports headed mainly to independent refiners in the Shandong province, where they began to displace comparable-quality Iranian Light.

But May appears to have been an outlier, despite a general increase in imports of Urals since the invasion, as the volume received in June was roughly half that of May and similar to that in April.

A rise in the cost of Urals, driven by Indian demand, while Iranian Light fell relative to Brent, may have contributed to this short-term deviation. Nonetheless, China remains one of the most attractive markets for displaced Russian crude. But whether the country takes more Russian product in future will depend on both politics and price. Furthermore, if China does take more Russian oil, it will probably be sweet ESPO blend delivered by pipeline or on short-haul voyages from Russia’s far eastern port of Kozmino, rather than Urals from the Baltic and Black Sea.

The impact on the freight market of these shifts in Russian crude flows to Asia has already been significant. Average Russian tonne-miles from the Baltic and Black Sea exceeded 64bn in March-June, more than 50pc higher than in November-February. Suezmax vessels have particularly benefited from this development. While Aframaxes dominated the trade in Russian Urals to Europe, Suezmaxes have taken a greater share of the long-haul voyages to Asia. As the former is phased out and the latter grows, the Suezmax segment is the most likely to benefit from higher tonne-mile demand. Some VLCCs are also being employed to carry Urals to Asia, mainly through ship-to-ship transfer operations. This growth in tonne-mile demand for Suezmaxes carrying oil from the Baltic and Black Sea to Asia is likely to support rates across the segment. 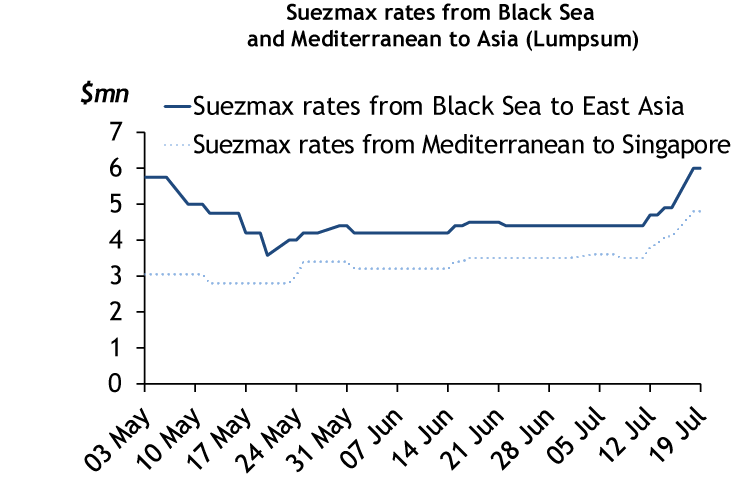 China’s imports of Russian ESPO have displaced sweet Atlantic basin crudes from Brazil, Angola, and the North Sea, which are increasingly going to Europe. Norwegian Johan Sverdrup, formerly a Chinese staple, was worth $5/bl more to European refiners in May and as much as $10/bl more in June, halting its export to Asia-Pacific.

This fall in Atlantic basin crudes to China can already be seen in the declining number of VLCCs on the route to Asia. According to data from oil analytics firm Vortexa, no VLCCs carried North Sea crude to China in May or June this year, against only one in April and 11 in January. These shifts have been driven by lower overall Chinese crude demand, as well as much stronger demand from Europe, as it diversifies away from Russian oil.

Europe’s turn to other sources of crude in the wake of Russia’s invasion of Ukraine has also affected trade flows, crude prices and freight rates from west Africa, the Mideast Gulf and the US Gulf. Average tonne-miles of imports to Europe were 20pc higher in March-June than in November-February.

For example, light sweet crudes from west Africa have been particularly attractive to European refiners. Nigerian crude prices are at record highs because of European demand. This has further incentivised Asian refiners to buy heavily discounted Russian crude. Loadings of west African product in March-June for delivery to Europe were 10mn bl higher than in November-February.

The type of vessel trading on the route has seen an even more dramatic change. Previously, the west Africa-to-Europe route was almost exclusively dominated by Suezmaxes, but the number of VLCCs has skyrocketed in recent months. Since March, VLCCs have carried at least 20pc of the west African exports to Europe every month. VLCCs are also increasingly used to transport oil from the Mideast Gulf and US Gulf to Europe. This has been driven by two factors ‒ the greater quantities of oil now on the routes as a result of Europe’s need to find alternatives to Russian supplies, and the relative under-utilisation of VLCCs resulting from lower Chinese demand. 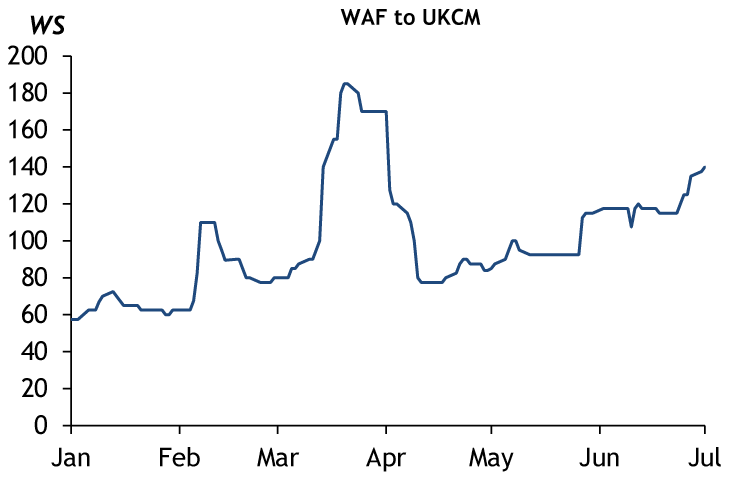 With the gradual return of Chinese crude following pandemic-related lockdowns in the country pulling more VLCCs back into this trade, Suezmaxes could again be the main beneficiaries of higher tonne-mile demand. Westbound shipments from the Mideast Gulf increased by 440,000 b/d from April to just above 3mn b/d in May, their highest level since May 2020. And loadings to west of Suez are expected to climb further in the months ahead, as European and US buyers seek more Mideast Gulf sour crude to replace Russian Urals, a medium-sour grade. While the lion’s share of these exports were loaded on to Suezmaxes, the number of VLCC cargoes increased to seven in May, from just four in each March and April.

As trade flows continue to shift in response to Russia’s invasion of Ukraine and accelerate towards the end of this year with end-of-term contracts and the implementation of EU sanctions, the impact on the freight market will deepen as tonne-mile demand rises, particularly for Suezmaxes. It is also likely that volatility will continue to mark the crude freight market amid questions over global capacity, including India and China’s ability to absorb Russian exports, and as Europe sources more oil and products from further afield and from more diverse sources.

Weight of Freight: “Wait and see is not an option” in decarbonization

The maritime and shipping industry – with more than 50,000 ships on the water – emitted 1.056bn t of CO2 in 2018, about 3pc of total global greenhouse gas (GHG) emissions. The recent Maritime Environment Protection Committee (MEPC) meeting in June 2021 laid down a concr...

Weight of Freight: Euronav breaks down decarbonization for tankers