G7 policy makers seem about to achieve exactly the result they did not want — disruption to the flow of Russian crude exports. EU sanctions on seaborne Russian crude exports are just weeks away now — they start on 5 December, after which non-European buyers looking to lift Russian crude will be unable to source G7 marine insurance or financing services unless the cargo is priced below a specified cap.

The problem is, nobody knows what that cap will be. As a result, trade in December-loading cargoes seems to be drying up. Indian purchases of Urals crude seem to be continuing since refiners buy this on a delivered basis, avoiding the need to arrange insurance. But less than a third of the cargoes listed on the December ESPO Blend programme have found a buyer so far. Uncertainty over what the price cap will entail is deterring buyers.

Some things are known about the price cap. It will be applied on a fob basis rather than cif, as rather bizarrely seemed to be the original proposal — presumably because Urals is normally priced on a cif basis. The price cap will apply only through the first landed sale and will not apply to “substantially transformed” crude, meaning any refined products derived from Russian crude will not be subject to price caps. The cap will be applied to ship-to-ship transfers and any supplies sold out of intermediate storage. No sanctions will be applied to buyers able to arrange non-G7 insurance or financial services.

The actual price cap itself has yet to be determined. Public statements by US Treasury officials suggest it could be as high as the $60s/bl range, in line with historical prices for Russian Urals exports. Argus’ Urals cif northwest Europe assessment averaged $64/bl in the five years to 1 November. The three-month average Argus fob assessment since September has averaged $68.74/bl, trading in the $66-70/bl range — about $25/bl below North Sea Dated. If set at this level, the proposed cap looks to be about where the market was pricing Urals at in the first place. In which case, it seems quite possible now that Russian crude exports will continue to flow broadly as normal — achieving the aim of G7 policy makers in one respect, but hardly amounting to a serious curb on Moscow’s export revenues.

Russian exports of refined products and feedstock have also held up relatively well so far. Total exports in February were 2.7mn b/d, and 2.3mn b/d in October (see graph). The 400,000 b/d drop was focused mainly on fuel oil, naphtha and refinery feedstock. Exports of diesel have fallen by less than 100,000 b/d, despite a 300,000 b/d drop in deliveries to Europe, where more than two thirds of imports normally come from Russia. European buyers have been able to replace these volumes by increasing deliveries from other refining hubs, principally India, the Middle East and the US. But the task of finding alternative supplies becomes much more difficult once EU sanctions and price caps are imposed on Russian product exports in February. The key concern is diesel — even after 10 months of self-sanctioning, Europe continues to import 600,000 b/d of Russian diesel. 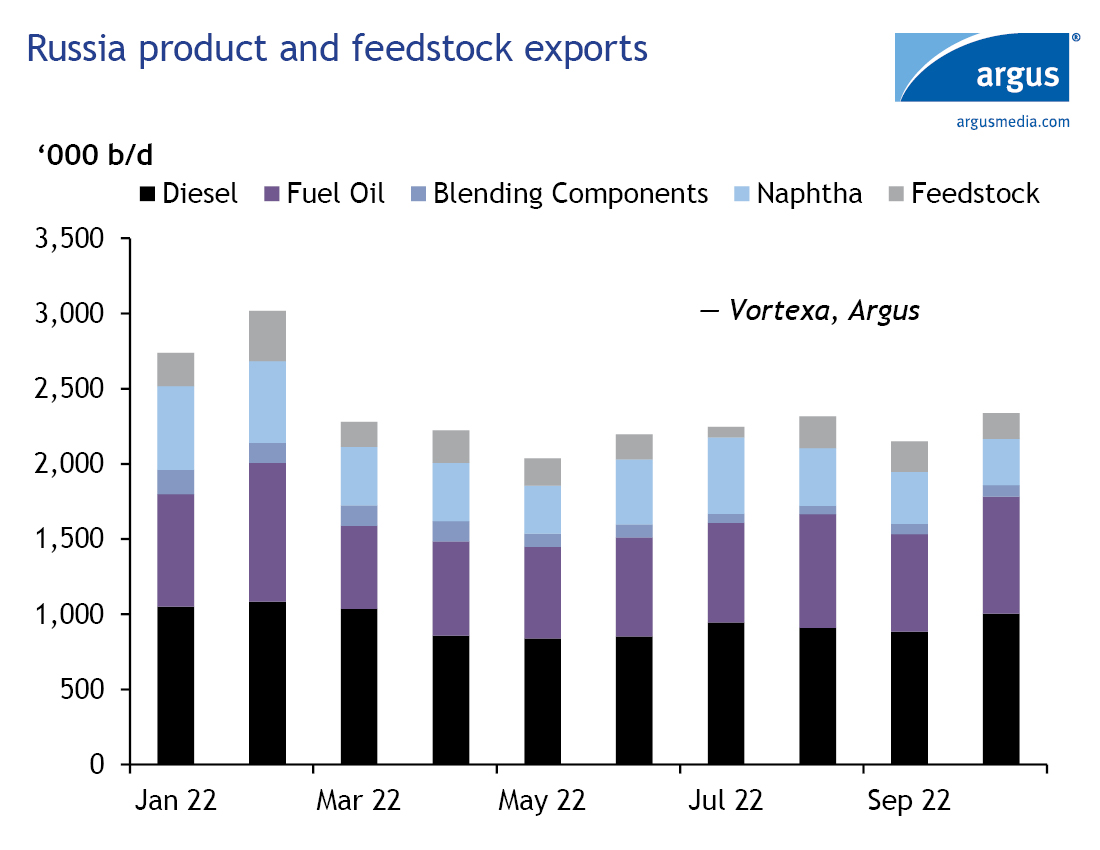 In theory, it should be possible to find alternative sources of diesel. India will not be able to supply any meaningful incremental supplies as its refining system is already running flat out. The US could supply around 600,000 b/d more diesel than in October if the system operated at a sustained 95pc utilisation rate and increased the gasoil yield to 33pc — early data show the US operating at under 90pc in October, with a gasoil yield of 31pc. But it is unclear if the US could operate like this on a sustained basis. The Middle East is estimated to be able to supply close to an additional 200,000 b/d of diesel from two new refineries — Al Zour in Kuwait and Jizan in Saudi Arabia — once these are at running at full tilt.

Perhaps the best option for incremental diesel supply is China — location of the only meaningful spare refining capacity available to the market. This results from the government’s control of the independent refining sector through the allocation of crude import quotas and product export quotas. For reasons not completely clear, these have been rationed since mid-2021, with the result that refinery utilisation in China has been held down to less than 70pc on occasion.

Chinese diesel exports this summer averaged less than 100,000 b/d. In early 2021, they often hit around 675,000 b/d. Recently, the government allocated product export quotas for the fourth quarter totalling almost 110mn bl. The bulk of this is likely to be used for diesel. Product exports have already increased sharply (see graph). 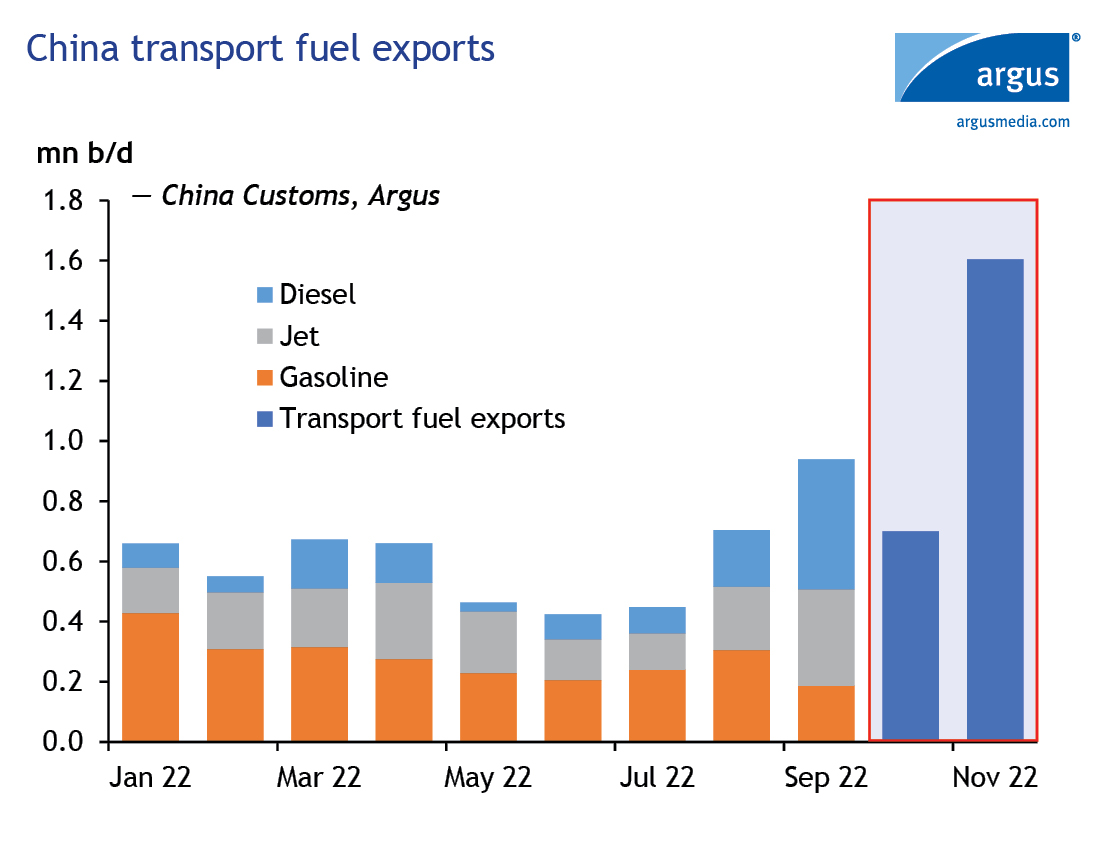 There is also the question of what happens to the Russian diesel displaced from the European market — will it be diverted to new buyers in other regions, freeing up product to come to Europe? So far, about 200,000 b/d of the 300,000 b/d or so of Russian diesel displaced from Europe has found new buyers, mainly in Africa, Asia and the Middle East. It is clear also that Russian traders are seeking new outlets in Latin America. The large-scale diversion of Russian product to non-European markets would clearly help to ensure global diesel demand remains satisfied.

As formal sanctions loom, it looks likely that sufficient supplies will flow to ensure that demand for both crude and products is met. But sanctions will make for a significant shift in the pattern of trade. Short-haul trade in Urals crude with Europe will become long-haul trade with Asia — Urals in Europe will be replaced by long-haul crude from the US, Latin America, the Middle East and west Africa.

Short-haul diesel trade to Europe will become long-haul trade with other regions, while European buyers will source material from refining hubs further away, including potentially as far off as China.

Inevitably, this raises costs, with higher freight rates and cif pricing in the key European market, which is structurally short of both diesel and jet fuel. This is an unwelcome development at a time of already vertiginous energy cost inflation — a key factor underpinning spiralling inflation generally. Higher inflation means a stronger US dollar, and a strong dollar means increased stress on dollar-indebted, commodity import-dependent economies. Since the start of this year, dollar appreciation has driven an increase in import costs in national currency terms of anywhere between 20pc and 50pc for crude buyers.

It looks like an outright shortage of crude and product supply resulting from EU sanctions will be avoided. But it looks inevitable that sanctions will still result in damage to the global economy — despite the efforts of the G7 to guard against a spike in prices.

This was first published in Argus Fundamentals, a service providing monthly intelligence on crude and refined products supply and demand,
both historically and up to two years ahead.

Learn more about this service

What is the impact of the Russian Diesel phase out in Europe? And what are the consequences to the global shipping market?

How will high prices impact European diesel demand? What is the outlook for diesel prices?

The EU sanctions on track to ban Russian oil from this winter onward will impact diesel more than anything else. Prices are likely to go so high that demand for the fuel gets squashed. That is, if the recession has not already destroyed that demand.