US crude flows to Europe remained resilient in August despite high freight rates and competing supply from Libya, while Asia-Pacific demand materialized as US benchmark prices fell relative to international values.

US crude flows to Europe remained resilient in August despite last month’s resumption of Libyan crude exports after weeks of blockades that nearly halved that country’s oil production. The higher available supply was poised to displace some crude imports from the Americas, but loadings were disrupted at the Caspian Pipeline Consortium (CPC) crude export terminal in the Black Sea.

Subsea equipment at two of the terminal’s three single-point mooring (SPM) systems developed cracks, likely meaning the facility will operate at reduced capacity for more than a month after repairs start. The third SPM has a loading capacity of roughly 910,000 b/d, or roughly 370,000-450,000 b/d under previously scheduled loadings of 1.28mn b/d and 1.36mn b/d for August and September, respectively.

European buyers appear to have developed interest in US medium sours instead — roughly 670,000 bl of US Gulf Mars crude is expected to arrive imminently in Rostock, Germany, marking the seventh such shipment to northwest Europe and the Mediterranean so far this year, according to Vortexa data. Rostock delivers to the 226,000 b/d Schwedt refinery controlled by Rosneft, which has also recently purchased a test cargo of WTI as part of a larger movement by European refiners to diversify crude supply.

US crude exports had risen to a 27-month high in June at 3.57mn b/d, according to the latest customs data, with shipments to Europe comprising more than 40pc of those flows at 1.52mn b/d. The Netherlands was the top destination, accounting for 435,000 b/d, or more than 12pc, of total US crude exports.

Preliminary data from Vortexa indicate US-to-Europe flows have since fallen to roughly 1.45mn b/d this month, pressured in part by unseasonably strong Aframax rates out of the US Gulf coast after the Libyan force majeures. 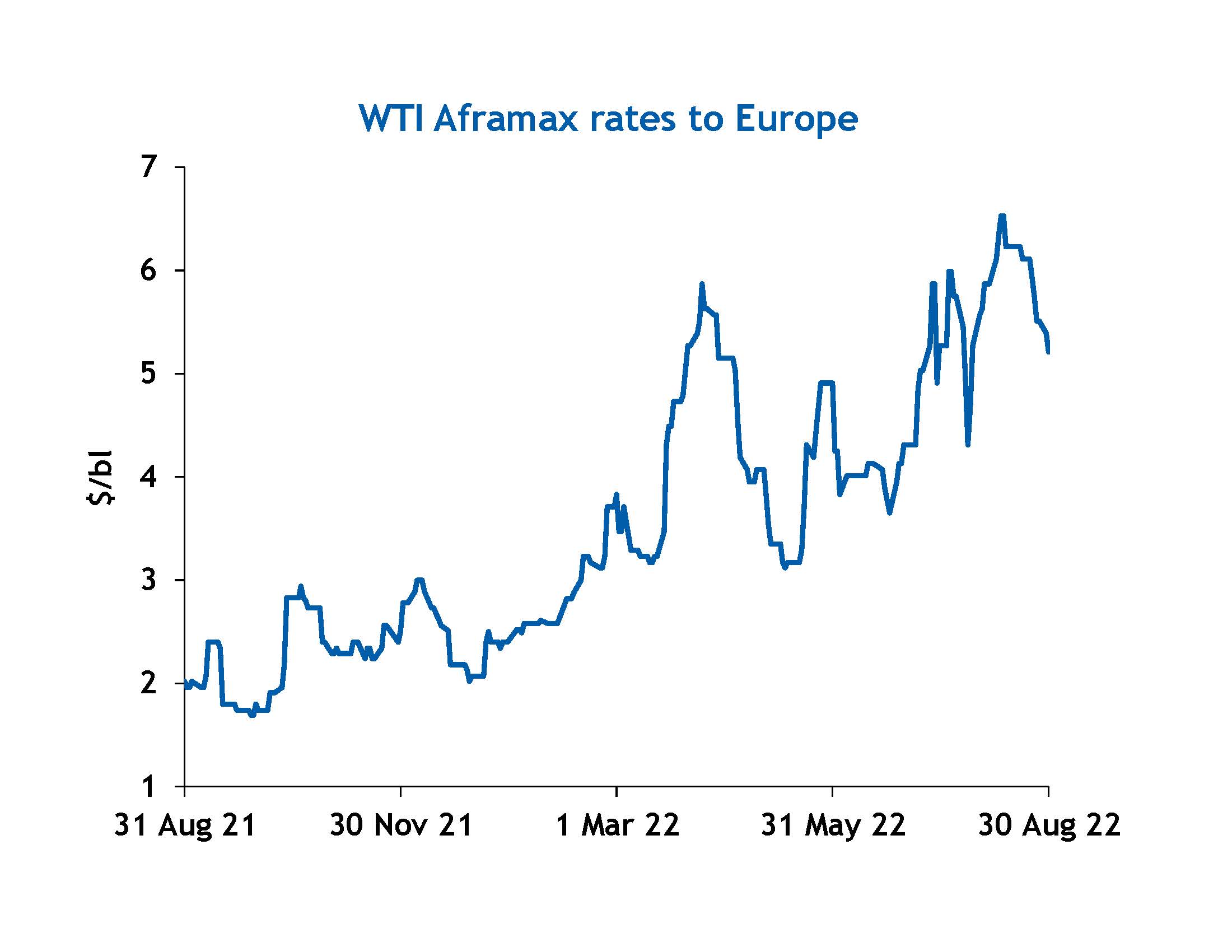 With domestic production continuing to hover around 12mn b/d, US crude exports likely have not reached their full potential — with further infrastructure investments still on the horizon.

US independent United Energy has acquired Integrity Terminals, a planned crude oil and products storage and export/import facility in Louisiana along the Mississippi River. The three-stage project will begin with the construction of rail storage and later expand to deep-water and barge access, and finally more complex rail systems. Construction could begin as early as the third or fourth quarter of 2023, with the expansion into water access and advanced rail storage coming in the first or second quarter of 2024.

The Louisiana International Gulf Transfer Terminal Authority, a political subdivision of the state government, is also seeking proposals for a deep-water transfer terminal to be built at the mouth of the Mississippi River in Plaquemines Parish. The project would potentially handle crude, LNG, products, containers and dry bulk.

And finally, Enbridge has agreed to boost its stake in the 900,000 b/d Gray Oak pipeline as of the second quarter of 2023 and take over as operator from Phillips 66 as the Canadian midstream firm seeks to tap into rising export demand from the US Gulf coast.

Gray Oak primarily ships Permian basin crude like WTI to the Corpus Christi port hub, but it can also take up to 100,000 b/d into the 300,000 b/d Kinder Morgan Crude and Condensate (KMCC) pipeline to Houston.

The September US trade month that concluded 25 August witnessed waning buying interest from European market participants, while a wider spread between the US benchmark WTI and the international marker Ice Brent sparked renewed demand from Asia-Pacific.

Market participants in India, South Korea, Taiwan and Thailand were all confirmed buyers of light sweet grades from the US Gulf coast for both September and October loading, pointing to a possible redirection of flows away from Europe in the near term.

The spread between the two benchmarks typically needs to be $4/bl or wider to incentivize shipments to long-haul destinations in Asia-Pacific to cover the difference in cost involved with longer transit times. Roughly 1.35mn b/d of crude has departed the US this month for Asian destinations, compared to 1.34mn b/d in July and just over 1mn b/d in August 2021.

Argus is watching, as always, how markets will play out amid ongoing geopolitical tensions and a pending recovery from the worst of the Covid-19 pandemic. Come back again next month for an update on the role of US crude exports in volatile global markets. Until then, smooth sailing.

In this episode, Amanda Smith, Argus Deputy editor Americas crude, and Scott Phillips, Argus Market reporter Americas crude, will discuss the US Gulf coast sweet-sour price spread and how that’s tightened with the recent shift in US Strategic Petroleum Reserve sales to ...

The US Crude Export Chronicles: July 2022

US crude shippers have their targets set on Europe, where refiners are still trying to phase out Russian oil supply and were forced to supplement tighter supplies from elsewhere with alternatives from the Americas.