From precious metal to shredder feed, where do primes go next? The ferrous scrap market descended on the Windy City last week to attend the Institute of Scrap Recycling Industries’ annual Roundtable’s event.

Market participants gathered on the heels of September domestic scrap trading where prime scrap prices fell for a fifth consecutive month, with most US regions shedding nearly 50% of value since their April peaks. 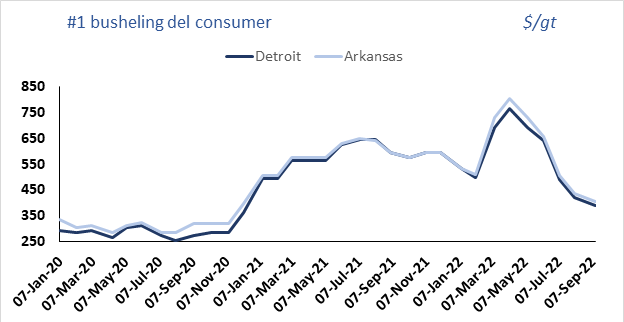 Prime scrap prices were at or below shredded scrap on a delivered consumer basis in nine of 11 US regions assessed by Argus in September. The discount to shredded scrap was expected to be short lived when it presented itself in August but with mills and dealers slow to adjust to changes in pricing dynamics it has continued into September.

Despite the expected temporary nature of the discount, more structural changes are still occurring in the market. In the long-term, the historical premiums for prime scrap may be challenged.

If viewed through just the lens of 2022, the current discount of prime scrap is likely just an over-correction to the supply shock or panic in March and April of this year following Russia’s invasion of Ukraine. As the invasion developed, US market participants believed $1,000/gt or higher busheling was a real possibility. Steelmakers were expected to be fighting for higher quality scrap to replace their pig iron usage as the war disrupted two of the largest suppliers to the US.

The weekly Argus US import pig iron assessment spiked to $1,000-$1,010/mt on a CFR New Orleans basis in March and April. Since the peak, pig iron prices are down by 52% as steelmakers were able to secure more supply from Brazil and India with even some smaller cargoes still arriving from Ukraine through Poland.

The supply panic led to overbuying of scrap and pig iron, while the worst-case fears about availability and sustained higher prices never came to fruition.

The collapse of prime scrap prices has also been against a backdrop of weak finished steel demand from US sheet mills. US hot-rolled coil prices have steadily declined over the same period only recently finding their floor and showing some slight gains. 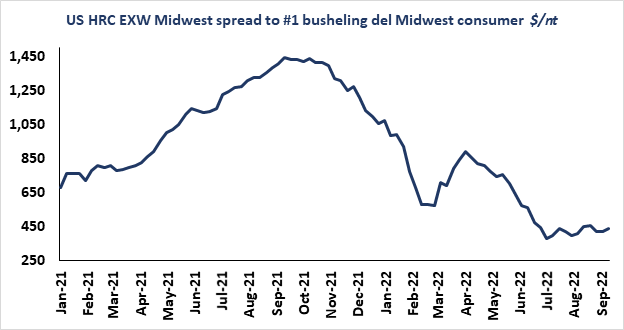 In the longer-term, EAF-based steelmakers appear to be reducing their dependance on primes. In July, Cleveland-Cliffs CEO Lourenco Goncalves told Argus his company was seeing less competition from rival steelmakers for prime scrap. This followed their acquisition of Ferrous Process and Trading (FPT) to secure prime scrap for its mills and pursue closed-loop recycling with its automotive customers.

The increased competition so far this year has resulted in many major US EAF steelmakers actively investing in securing prime scrap supply via strategic acquisitions, pursing alternative solutions like low-copper shred or investments in the scrap and iron metallics supply chain to reduce independence on the grade.

The average premium for Argus #1 Detroit busheling prices over shredded scrap prices was $43/gt in 2016-2021. In September, busheling was at a $20/gt discount to shredded scrap in the region after being a $160/gt premium in April.

Even with market participants viewing the current discount to shredded scrap as a temporary phenomenon there are still questions about where the premium for prime scrap will settle in the long term as mills cut their reliance on prime scrap.

Your definitive source of unbiased pricing and reporting for the US scrap market, including busheling, bundles, shredded, P&S, HMS, machine shop turnings, tin can bundles and freight rates.

Metals Movers: The long and flat of US steel

How have raw materials, scrap and fuel costs factored into the decline of US HRC and rebar prices?

What challenges lie ahead for Green Lithium as they look to establish a sustainable lithium supply that does not rely on China’s refineries?

How the macro-economic events are affecting the ferro-alloy market and driving prices volatility and demand in the short term.