BOPP (bi-axially oriented polypropylene) film is widely used in labelling and consumer packaging, where it is noted for its clarity and thermal resistance, as well as its suitability for food contact applications and printing. Close to 1.7mn t/yr of BOPP film is produced in Europe, representing roughly 15pc of total polypropylene consumption.

But despite its bankable qualities, BOPP has not been a cash cow for European producers this year. Industry operating rates are at or below 75pc of capacity on a combination of lower-than-expected demand in Europe and capacity increases. An influx of imports gaining market share in higher volume commodity markets is putting further pressure on BOPP margins.

BOPP imports, mainly from the Middle East and Asia-Pacific markets, have risen incrementally in recent years, shifting Europe from being a net exporter around the turn of the millennium to becoming a net importer to the tune of over 40,000t  in the first seven months of 2016 — the latest period for which Eurostat trade data are available. 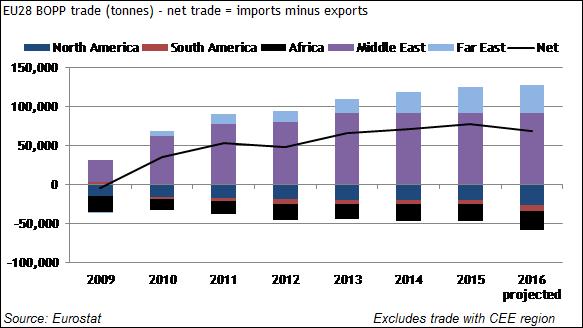 Exports are also increasing to balance the imports, particularly in the specialised grades. But the competition in high volume commodity BOPP grades inevitably weighs on operating rates, even if specialised grades offer the strongest margins.

At first glance, this does not paint an optimistic picture for the industry, but European BOPP suppliers are clearly confident in bullish demand forecasts, and are putting their money where their mouths are with investment in capacity additions and expansions.

European BOPP demand is forecast to grow strongly until 2019. Rather than the cash itself, higher BOPP consumption is expected to be driven by the supermarket products on which it is spent.

BOPP’s qualities mean that it is most commonly used for food packaging, in markets including baked goods, confectionary, dried foods and groceries.

Specific food industry data are difficult to obtain, but Eurostat’s index of production in non-consumer durables – which includes the manufacture and processing of foods – has increased steadily over the past three years. 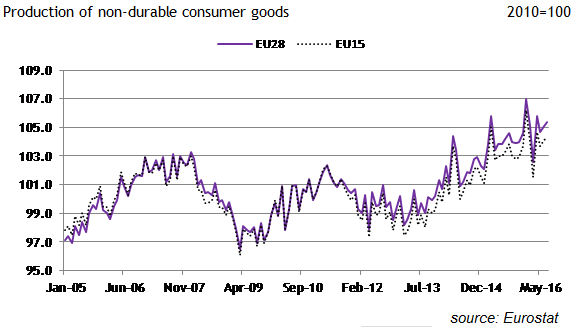 Global eating habits have also shifted towards more packaged food in recent years for reasons of convenience — people snack more, although there are signs that the trend is reversing — as well as hygiene and freshness.

Other markets such as tobacco wraps are in decline in Europe as smoking habits change, although some developing markets including southeast Asia are still posting growth.

European capacity is expanding as a result of this investment. Portuguese manufacturer Poligal is in the process of building an entirely new 40,000 t/yr production site in Poland, which is expected to start up in the first half of 2017.

New lines have been added at plants in the UK, Portugal and Germany since the beginning of 2015, with another at Jindal Films’ plant in Brindisi, Italy, expected to be installed before the end of this year.

The arrival of such a large amount of capacity in a short space of time is likely to create a challenge for producers in the next few years. But it also signals the positive investment economics for the industry, while investment by overseas companies such as Jindal suggests that they have identified a need for local production – as well as imports – to satisfy customers’ need for security and flexibility of supply.

European BOPP suppliers will bank on innovation, state-of-the-art equipment and growing demand to allow them to ride the money train for years to come.