This is the third in a series of blogs using data from Argus Data and Downloads, which are available to Argus Direct subscribers here.

This is the third in a series of blogs using data from Argus Data and Downloads, which are available to Argus Direct subscribers here.

European LNG supply has risen to the highest in recent years, but when looking at the breakdown of sendout by country it is much too early to call it a “wave”.

The increase so far this summer has come from countries mostly outside the liquid hubs of northwest Europe. Instead of being dumped in northwest Europe, LNG has been competing with Algerian pipeline gas in Italy and Spain. 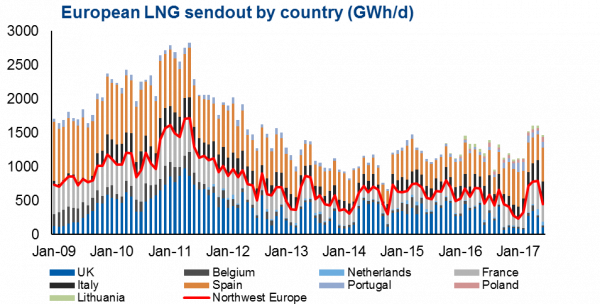 I’ve added the red line to data here to show that combined regasification in northwest Europe — the UK, Belgium, Netherlands and France —remains considerably below its previous highs.

LNG producers have not been offloading supply in northwest Europe as they did in 2010-11. This is particularly the case for Qatargas and Rasgas, which have been able to increase their sales in premium markets such as Egypt and India.

Northwest Europe’s LNG receipts are typically driven by factors outside the region. Qatargas often delivers more cargoes to South Hook in periods of weak demand in its premium markets such as the northern hemisphere’s spring.

But the increase in LNG deliveries to Italy and Spain are partly driven by prices in southern Europe, with the PSV and PVB becoming the global premium markets.

The Italian and Spanish front-month markets have stayed just high enough to outbid northeast Asia for LNG. Italy’s LNG sendout climbed to a record high in June, while Spanish regasification in January-June was the highest for the period since 2012.

Italy’s brisk receipts have been partly driven by the regulated LNG storage and regasification service. And long-term LNG capacity holders such as BP have brought cargoes to Italy with few opportunities to sell to the usual premium markets outside Europe. This has added to supply delivered under long-term contracts, such as between Edison and Rasgas.

There is little incentive for firms that do not hold capacity to deliver to Italy because of the cost of short-term bookings. But for long-term capacity holders, variable costs are only about €0.51/MWh, with most costs considered sunk.

Strong demand in southern Europe has helped lift prices in the region above the more traditional premium markets, such as northeast Asia and the Middle East.

But the increase in Spanish and Italian LNG imports has only partly been the result of strong demand in the region pulling LNG towards Europe. There are also push factors at work with the increase in global liquefaction capacity contributing to the typical premium markets in northeast Asia being only slightly above northwest European hubs.

Italy and Spain could comfortably meet demand without the additional LNG imports by increasing pipeline receipts, mostly from Algeria. But LNG has become a cheaper source of supply than oil-indexed pipeline gas, encouraging long-term capacity holders to bring in cargoes rather than raise nominations for Algerian gas.

Italy and Spain could remain the premium global markets if LNG prices stay below the cost of oil-indexed pipeline supply.

But southern Europe’s demand for cargoes could dry up, even if LNG is cheaper than crude-linked pipeline gas.

Italy and Spain still have ample long-term contractual obligations, which limit the flexibility to turn down pipeline imports even when it is the most expensive source of supply.

And a mild winter or wet weather would cut consumption sharply, which could bring PSV or PVB front-month markets much closer to northwest European hubs and potentially below northeast Asian LNG prices.

Northwest Europe may then need to deal with a real wave of LNG, especially if rising global liquefaction capacity outpaces demand growth in northeast Asia and the Middle East. 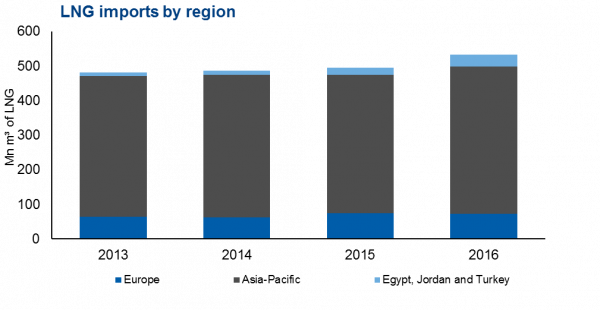 But strong demand growth in China, India and Egypt has so far been able to absorb much of the new global LNG supply, which had contributed to European receipts stagnating until this summer. 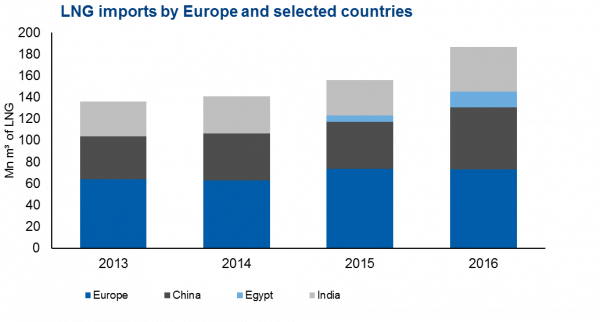